With Veteran's Day just around the corner, I decided to tell the story of another person who gave their life fighting for our Country.  This week we will feature a weatherman for the US Army Air Force who was was killed on December 7, 1941 in the Japanese sneak attack on Pearl Harbor: Sherman Levine.

A recent Find a Grave photo request took me on a sunny summer afternoon to Westlawn Cemetery in Norridge, Illinois.  I knew that I was looking for a military gravestone, but it wasn't until I actually found the gravestone for Sherman Levine that I realized that his date of death was December 7, 1941.

After I filled the photo request I received a thank-you from the requestor, who told me he was researching all the Air Force weathermen who have died in service to our country.  He has over 120 Airmen in his records as having died and another 150 weather reconnaissance personnel who have perished since WW II. He's putting all this information in the Air Force Weather Agency (AFWA) archives at Offutt AFB, NE. One of the 270 people featured in their database is Sherman Levine.

The 1930 Census shows the Levin family (as they now called themselves), living at 1221 N. Hoyne Avenue (near Western & Division).

Harry listed his occupation as "Salesman for a Commercial Manufacturing firm". Isadore, Blanche and Hannah were not living with the family.  Morris was a dentist, Meyer was an accountant, Ruth was a stenographer, Sidney was a clerk, and Louis, Helen, George and Sherman were all in school. 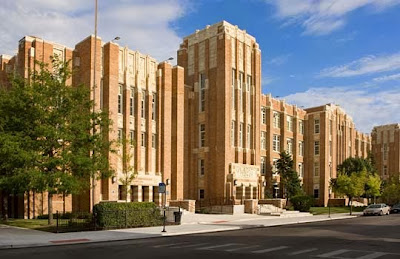 He was on the swimming team at Von Steuben.  Here's a photo from the yearbook: 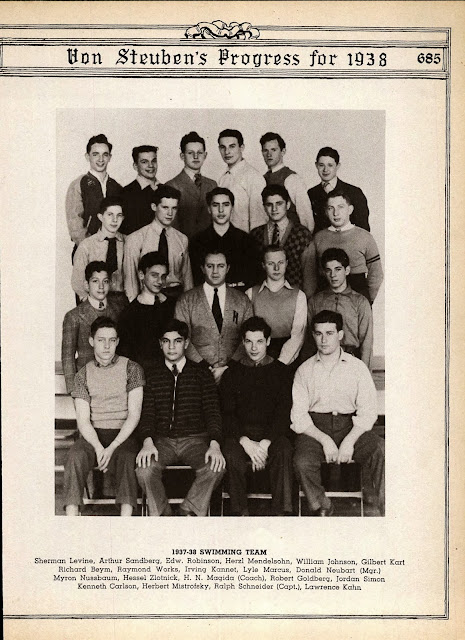 and here's his homeroom photo: 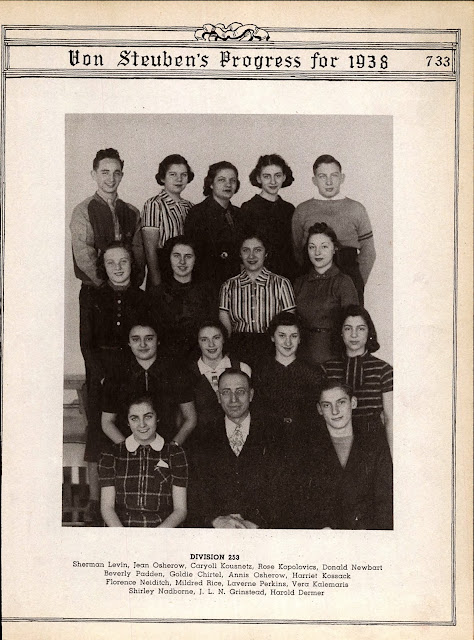 Sherman is in the upper left corner of both.  He looks like a typical happy teenager of the 1930s.

The 1940 Census shows that the Levin family had moved to 4910 Monticello Avenue in Chicago.

59 year-old Meyer lists his occupation as "Salesman of Wholesale Ladies' Dresses", Esther keeps house,  Morris is a Dentist, Louis is a Census Taker, George is a "New Worker" and Sherman does not have an occupation listed.

Sherman Levine was a member of the 1940 graduating class of Von Steuben High School in Chicago.  He was very athletic.  I have shown above his photo from the sophomore swim team; by the time he was a senior, he had lettered in swimming, baseball and basketball: 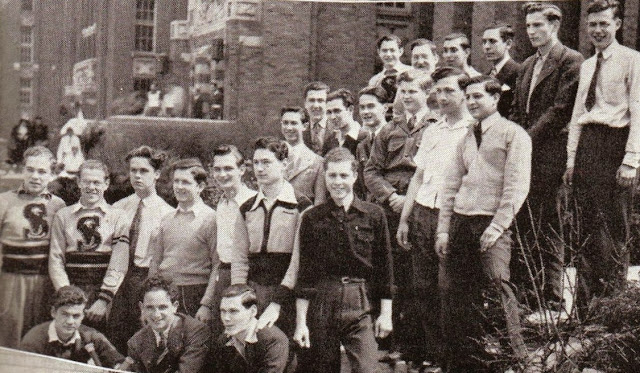 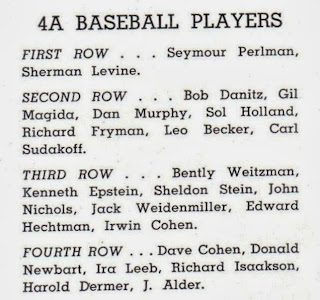 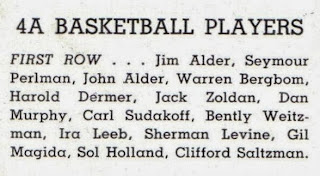 Here is the prophecy for Sherman from his senior yearbook:

Here's an inscription Sherman penned in a friend's yearbook: 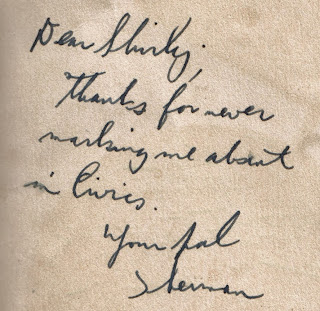 and here is Sherman's yearbook photo:

In every photo I have seen of Sherman he is smiling - a bright, happy young man with his whole life ahead of him...

War was in the air, and Sherman Levine decided not to wait - he enlisted in the United States Army Air Corps in Chicago on November 5, 1940.  In June, 1941 the Army Air Corps became the Army Air Force. Sherman was assigned to the Hawaiian Division.  His enlistment form said that he had completed 4 years of high school, and had been employed as a clerk.  He was 5' 10" tall, and weighed 177 lbs.

At some point, Sherman Levine was transferred to Hickam AFB on the island of Oahu, Hawaii.

Most people who are frequent readers of this blog are very familiar with the Japanese attack on Pearl Harbor, Hawaii on December 7, 1941. However, since I have occasional readers from around the world, if you need more information on what took place on that "Day That Will Live in Infamy" you can find a good overview at:

According to eyewitness reports, Sherman Levine was one of two observers who were on duty at Hickam when the Japanese struck. Sherman was in the administration building near the flight line. Running back past two buildings to get his helmet he was caught with the others in the open on the edge of the parade grounds. He was one of five weathermen struck down by an 800-pound Japanese bomb as they made their way back to the barracks.

What, exactly did Sherman Levine's duties entail?  Sherman was a weather observer, not a forecaster.  His job was to assist the forecaster with various duties and observe the weather.  Sherman took hourly weather observations on the state of the atmosphere.  Sometimes these observations were more frequent depending on how bad the weather was.  Sherman would go outside to an official observing point that had a clear view of the sky and  horizontal visibility.  He would determine what types of clouds were in the sky, how much of the celestial dome was being covered by those clouds, estimated or measured (with different instruments) how high the clouds were off the ground, and lastly determined what the prevailing visibility was and any obstructions (fog, rain, haze, etc.) to that visibility.  He would back inside and add the temperature, dew point, atmospheric pressure, wind direction and speed, and any remarks (e.g., thunderstorm overhead) to his observation of the clouds, weather, and visibility.  He wrote the "observation" on a form and then would send it out locally to the forecaster and tower personnel, and longline to the local area and United States via teletype.  Sherman also probably plotted different weather charts for the forecaster and may have done other duties like tearing and filing the observations and forecasts that came over the teletype machine.  The forecasters liked to have all that teletype data organized and filed on clip boards for quick reference.   Weather observing can be very technical and you need a lot of knowledge on how to code the observations and reliably determine the weather conditions.  It's more complicated than it sounds.  For example, in determining the horizontal visibility, we would have visibility markers (buildings, towers, mountains, etc.) that had known distances from the observing point.  Using those markers, he had to figure out the prevailing visibility.  He just didn't go for the farthest distance you could see in one direction.  He had to average out the farthest distance he could see over half the 360 degree field of view.  He also had to write down in the remarks section of the observation any sector visibilities that differed from the prevailing visibility and what was causing the difference (e.g., fog bank North East, rain shower West).  There were lots of little rules like that in weather observing.  Even determining wind direction and speed depended on different rules.  All of this stuff was put into a code for easy transmission.  So, even though it was a balmy Sunday morning in Hawaii,  before the attack Sherman had plenty to keep him busy.

Even though the Japanese primary target was Pearl Harbor, it was also necessary for them to attack Hickam Field so that the United States could not launch an air response to the attack.  The destruction at Hickam was tremendous.  Here are some photos of Hickam Field, taken during and after the attack: 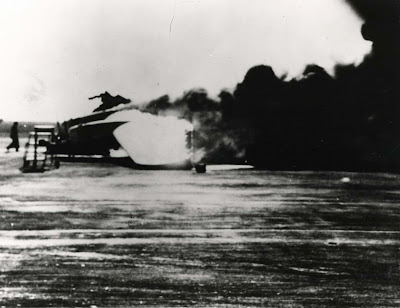 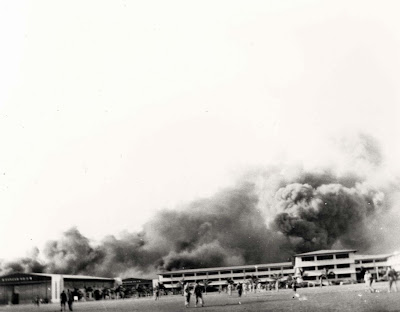 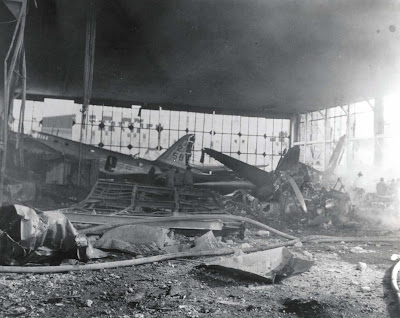 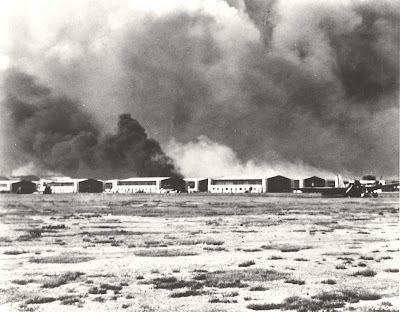 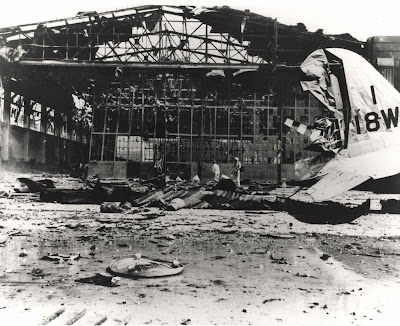 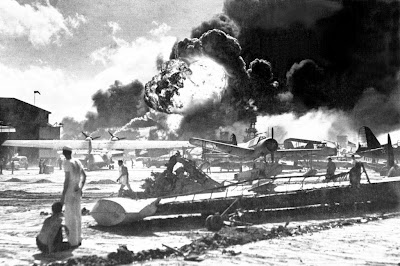 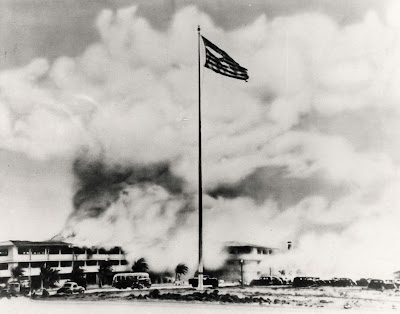 News of the casualties of the surprise attack on Hawaii by the Japanese took several days to work its way back to the homeland.  The Chicago Daily Tribune of December 13, 1941 reported the loss of three men from Chicago including Sherman Levine (identified correctly in the article, but in the photos referred to as "Donald Levine.")

There was no system in place to have so many casualties shipped back to their families for burial, coupled with the fact that the US could not at that time afford to spare men, aircraft or fuel to ship bodies back home. Sherman Levine was temporarily buried in Hawaii, as were his fallen comrades.

Even without a body to bury (they didn't get it back until 1947), the Chicago Jewish community rallied around the memory of Sherman Levine.  The Chicago Daily Tribune of May 21, 1942 shows Sherman's mother and brother George presenting the Red Cross with a check for $500.00 - the proceeds of a benefit dance hosted by B'nai B'rith: 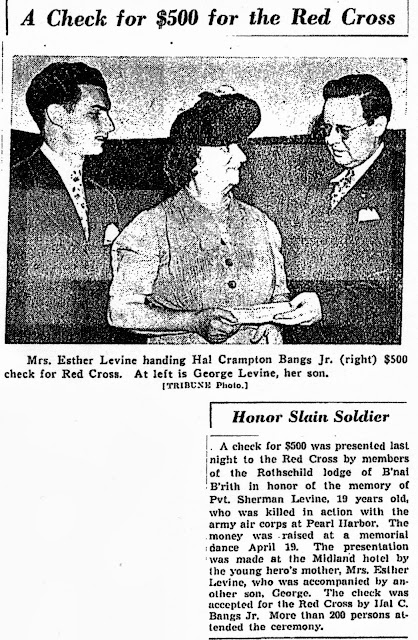 To make sure the memory of Sherman Levine was not forgotten, the Chicago area B'nai B'rith named one of their softball and one of their basketball teams "Sherman Levine," so Sherman's name shows up in the sports pages of the newspapers on a regular basis.

In 1946, the Chicago Jewish community took another step to see that Sherman Levine's sacrifice was not forgotten.  The Tribune of January 13, 1946 mentions that the Jewish United War Veterans of the United States named one of their posts the "Levine-Meyers" post, for Sherman and Army medical corpsman David Meyers, who had been killed in Germany.

In 1947 the family finally got the news they had been waiting for, for so long:  Sherman's body would be one of the hundreds of bodies returned to Chicagoland for burial. 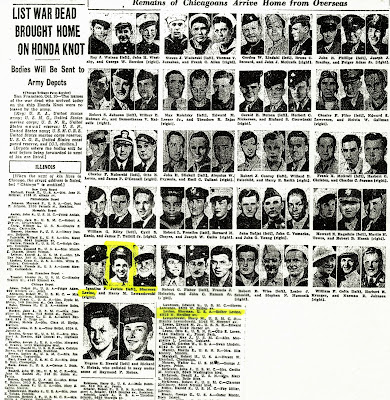 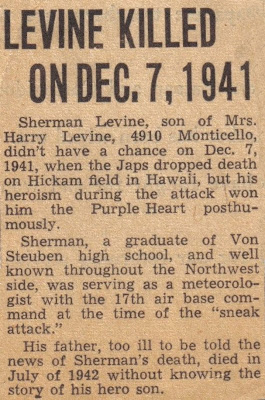 Sherman Levine was reburied with full military honors at Westlawn Cemetery on October 26, 1947, in the Dahlia Section next to his father who died in 1942 without ever knowing about Sherman's death at Pearl Harbor. 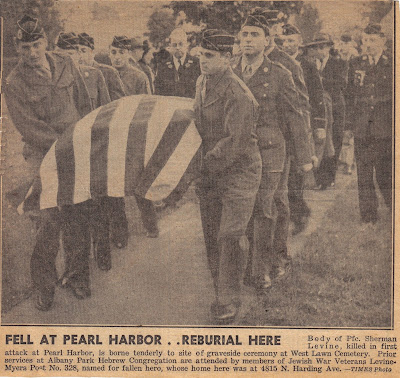 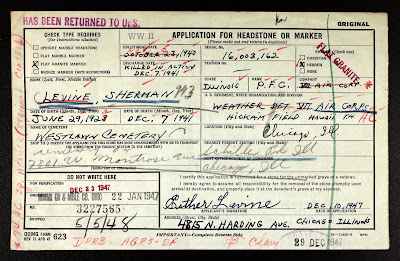 As I mentioned at the beginning of this article, the Manager of the Weather Operations Division of the Directorate of Operations of the U.S. Air Force is putting together an archive of material on all 270 men who lost their lives in service to our Country.  Right now he is just working with a list of names - he would, at the very least, like a photograph of each of the 270.  He currently has information on 199 of the men on the list, but has been unable to locate any information on the remaining 71.  When I was talking with him about doing the article on Sherman Levine, I suggested that he give me the list of names where he has been unable to find information, and I would publish it as part of the article.  My readers are all over the world, and are all interested in history, so please look at the list and see if you have information on any of these men, or if you know of a member of their family or someone else who might have photographs or other information.  If you have any information, please send it to:

When I started my article on Sherman Levine I had very little material on him, but with time and a little luck I managed to find all the information shown here.  I told the Air Force that I was certain that we could help - now let's show them what we can do.  Here is the list:

2,386 Americans died in the attack of December 7, 1941.  While it is not possible to know the story of each one, the Weather Operations Division of the Directorate of Operations of the U.S. Air Force is trying to make sure those who died on December 7, and all of the 270 men who died working for the weather service are not forgotten.  Please look the list over, and if you can help with material on one of the lost, please send it to the email address above.  If you know someone who might have information, please pass this article along to them.

We are very proud of all the men and women who made the supreme sacrifice on December 7, 1941.  I especially want to remember a smiling kid from Von Steuben High School who went to war and came back to Chicago in a box draped with an American flag.  I never knew Sherman Levine, but I will never forget him.