the first person buried in Acacia Park Cemetery in Chicago:

and the first person buried in Memorial Park Cemetery in Skokie, Illinois:

Alexander Guneshoff's tombstone even states that he was the first person buried at Memorial Park: 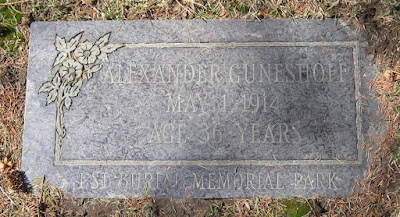 But what about the community mausoleums?  Who were the first people interred there?  I have never encountered a crypt that said "First interment in Xxxxx Mausoleum."  In every case that I have checked, the cemetery could not tell me who the first person was to be interred in their community mausoleum.  The records must exist somewhere but as we have seen in the past, most cemetery owners/employees are not interested in events at their cemetery in the past, they are just interested in selling interment space today.

So I did a little digging to try to find out who the first person was who was interred in the Rosehill Community Mausoleum.  I decided to look for the first newspaper obituary/death notice that said "Interment in Rosehill Mausoleum."  The first mention I found was for John Lefnestey in the Chicago Tribune of September 18, 1915, but his Death Notice only said "Services at Rosehill Mausoleum" not that he was interred there.

The first interment notification I was able to find was from the Chicago Tribune from October 31, 1915 for Franciska (Frances) Lang:

Surprisingly, the second interment was her husband, Michael George Lang.  This is from the Chicago Tribune from one week later, November 8, 1915:

So, let's see what we can "dig up" about Franciska and Michael George Lang.

Michael Lang and Franciska Hoer were married in 1866 in Will County, Illinois.  The 1870 US Census shows the Lang family living in Chicago.  The family consisted of Michael Long (sic), age 25, a "Saddler," born in "Baiern," who was a citizen of the US.  Along with Michael was his wife "Franky" (22), children Ida (3), Edward (7/12) and Michael's mother Margaret Lang (66) also from Baiern.  Please tell me again why we should accept the US Census as source documentation to verify facts...

The 1890 US Census for this area is, of course, lost, although we know from other sources that the Lang family was still in Joliet in 1890.  Their youngest child, Lorene Edna Lang was born in Joliet on December 11, 1890.  During his time in Joliet, Michael Lang was a Foreman for A. F. Risser & Co.  The business of the firm was that of manufacturers of saddlery, harness, collars, etc., and dealers in saddlery hardware, horse clothing, fly nets, leather and whips, so that they could furnish an entire outfit for a horse - everything except shoes.

By the time of the 1900 US Census, however, the Langs have returned to Chicago.  They were living at 349 N. Hudson Avenue (now 1935 N. Hudson).  Town houses occupy that spot today.  The family consisted of fifty-five year old Michael, a "Supervisor of a Harness Shop," his wife Frances (52), children Ida (32-Dressmaker), Edward (30-Postal Clerk), Nettie (26-Dressmaker), Joseph (23-Restaurant Cashier), Minnie (19-At school), Arthur (15-At school), Florence (13-At school), Lorene (9-No occupation listed), Frances' mother Catherine Hoer (79), and two Boarders: Matthew (18) and Annie Reich (14).  Matthew was an "Apprentice Harness Maker," and Annie was "At school."  Frances Lang said she had given birth to eight children, and that all eight were alive in 1900, but her mother Catherine Hoer said she had given birth to seven children and only two were still alive in 1900.

Now I have a real treat for you.  On September 7, 1906, Michael Lang (known then in the family as "Old Mickel") wrote down his recipe for home-made "Lang Beer."  Beer has always been a staple of the German diet, and many Germans brewed their own beer.  Here is his recipe:

Ricetank mashed in with malt at 35° R

Malt mashed in at 33° R. Soaks any length of time till ready.  When ready to mash off malt juice pumped in mash tank of ricetank.  When mashed off it will have 51° to 54° R.  then Steam to 59° R., then pump juice in again.  Leave Mash stand still for ½ hour or longer.  Then pump in again till it runs Clear.  When Clear, leave it go in kettle.

Frances Lang died first - on October 29, 1925 at 3:00 in the morning.  The Cause of Death was Acute Cardiac Dilatation and Myocarditis with Chronic Nephritis and Rheumatism as contributing factors.  She was interred in the Rosehill Mausoleum on November 1, 1915.  Here is her Death Certificate: 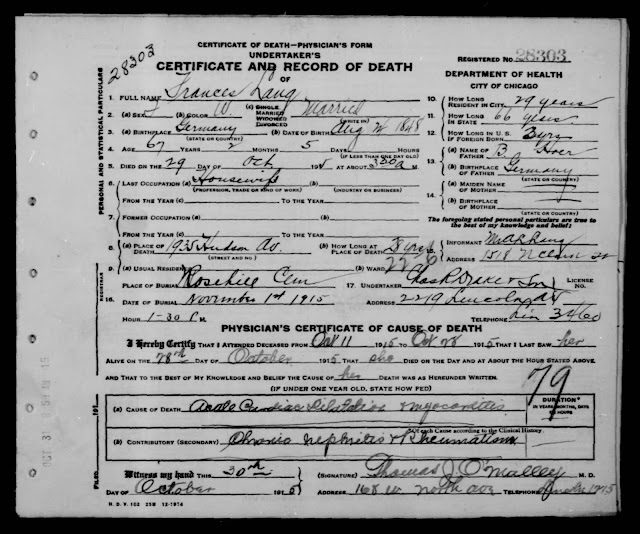 Michael Lang died next - nine days after Frances - on November 7, 1925 at 5:15 AM.  His Cause of Death was Cirrhosis of the Liver with Cardio-Vascular Sclerosis as the contributing factor.  Michael was interred in the Rosehill Mausoleum on November 9, 1915.  Here is his Death Certificate: 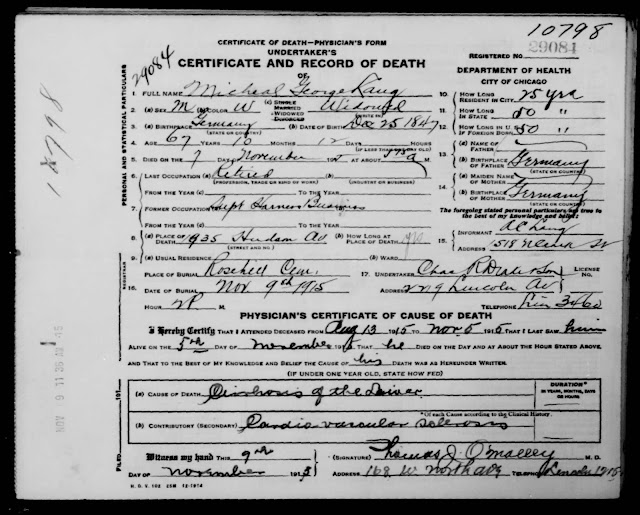 Ground had been broken for the Rosehill mausoleum on April 10, 1913 and the mausoleum officially opened to the public on April 9, 1916 - after Frances and Michael Lang had already been interred there.

The private family room of the Lang Family in in the oldest part of the Rosehill Mausoleum:  Unit A.  It is in the front hall that you enter by coming through the double doors on the East side of the Mausoleum: 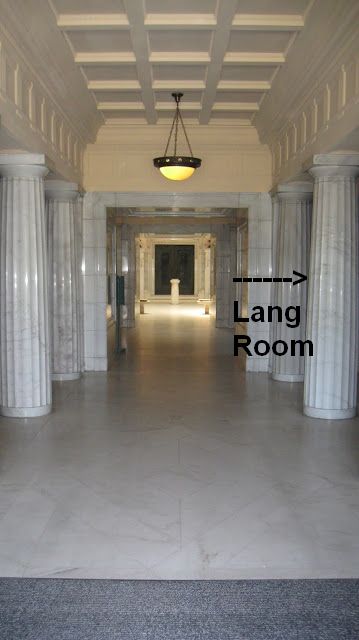 It contains five crypts.  Here is the door to their room with the "Lang" name on it: 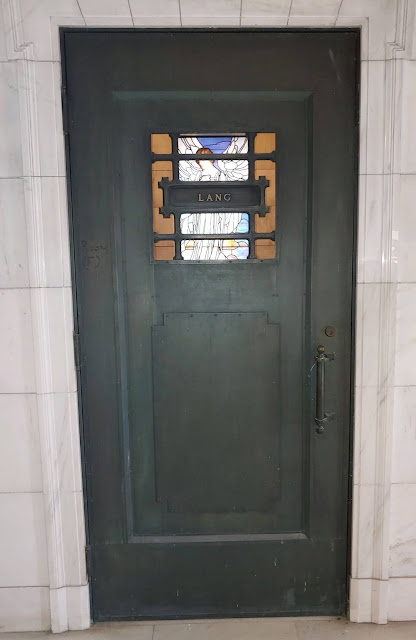 Here is their stained glass window: 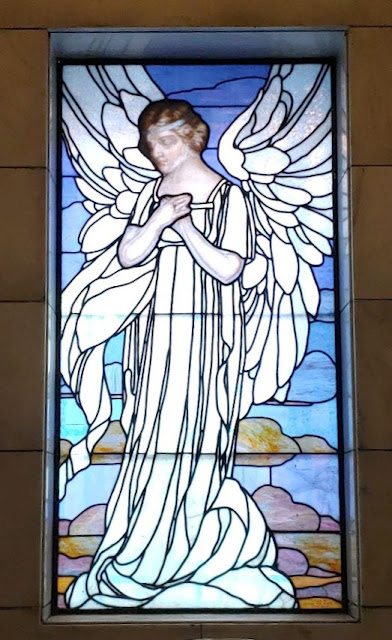 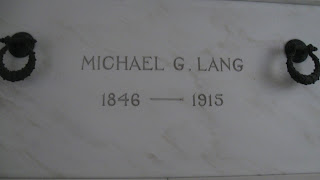 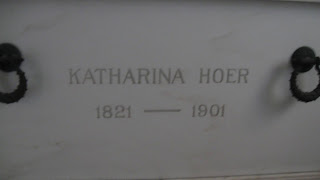 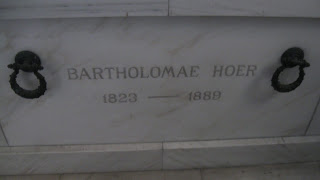 Now that you feel like you know them, I think you would enjoy seeing photos of Michael and Franciska, so here they are:

Just as a side note, their daughter Nettie liked the family room in the mausoleum so much she bought one for herself two doors east of her parents' room and was interred there when she died in 1922: 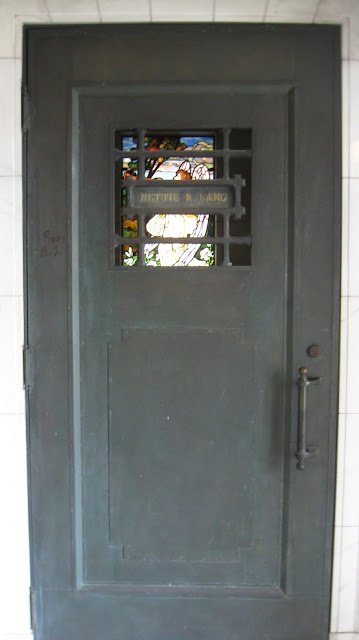 So now you know the story of the first two people interred in the magnificent Rosehill Community Mausoleum.

Franciska Hoer Lang and Michael George Lang - may they rest in peace.