THIS ONE IS FOR THE BIRDS - Mrs. Henry (Kathryn) Coit

You just never know what's going to show up on ebay.  Recently I came across the following photograph: 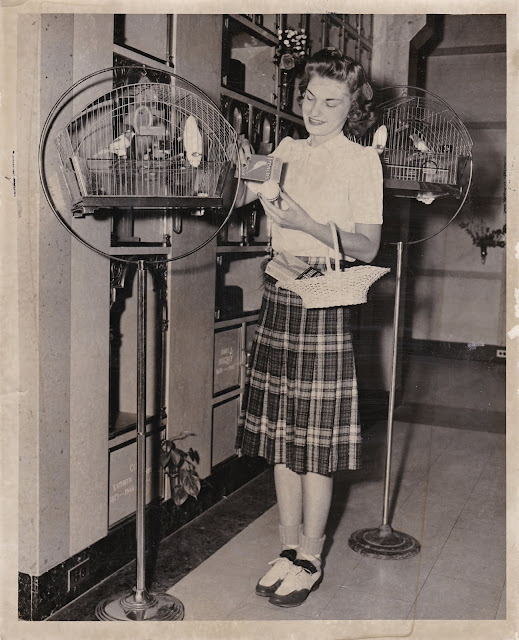 The photo is from the Chicago Times newspaper archive.  It appeared on April 29, 1948 with the following caption:

"Charles" and "Audubon" two beautiful canaries who sing at the niche where the ashes of Mrs. Henry Coit rest.

Shirley Johnson, 25, 811 South Blvd. Evanston attached to the cemetery office, sees to it that the birds are well fed and taken care of.  Mrs. Coit's remains occupy a niche in the Columbarium of the Mausoleum, a magnificent structure built of solid marble mostly imported.  Every one of the scores of rooms (crypts?) are of a different color and come from different parts of the world.  The lower floor is mostly American marble of the usual white and creamy white color.

Mrs. Coit's remains lie next to those of her husband Henry at the lower left of the photo.  Here is a better photo of the final resting place of Mr. & Mrs. Coit: 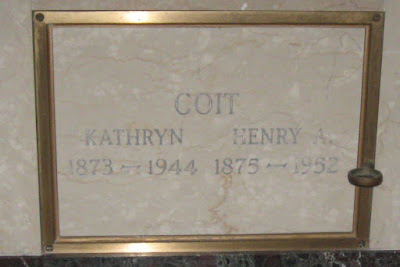 Before we take another look at this unusual post-mortem request, let's see what we can "dig up" about Kathryn and Henry Coit.

Kathryn's father, Jay Howard, was a farmer in Dutchess County, New York and was also a Civil War Veteran.

The 1880 US Census, which would have been Kathryn's first, shows her father Jay Howard and her brother Frank living with Jay's father James Howard in La Grange, Dutchess County, New York.  Kathryn is not with them - she is living with her grandmother (and probable namesake) Catherine Hallock (1835-1889) also in Dutchess County.

The 1890 Census for that area is lost, and unfortunately I was unable to find Kathryn Howard in either the 1900 US Census or the 1910 US Census.  We do know, however that by 1912 she was living in California because on September 21, 1912, thirty nine year-old Kathryn Howard married thirty seven year-old Henry Augustus Coit in Glendale, California.

In 1918, Henry Coit was interviewed for the California Biographical Index.  He said that he had been educated in "Philadelphia and St. Louis private schools and tutors."  He had been in Los Angeles since 1903.  He said that he sometimes used the alias of "Henry Arvin" and that he wrote largely for amusement, not professionally.  He told the interviewer that he had written "War's End - a play in one act, and had also published articles, poems and stories in bound volumes of 'Everyman' (published in Los Angeles).  He also contributed articles on Single Tax, etc., to several papers - also on banking and finance.  He reported that he had two plays in preparation and a volume of Poems.  He said "My business is "Promoter" and Financial Underwriter."

On September 12, 1918, Henry Coit registered for the draft.  He said he was 42 years old and was native born.  He said that he and his wife Kathryn were living at 326 N. Avenue 66 in Los Angeles,  He listed his occupation as a Manager at Marine Corporation, 1223 Marsh Strong Building, Los Angeles.  Mrs. Ruth Judson the Registrar, reported Henry Coit as "Tall, Medium Build, with Light Grey eyes and Brown hair.  She also reported that he was "bald."

326 N. Avenue 66 is near the Gravanza Reservoir, east of the Highland Park neighborhood.  Here is a picture of it today:

Here's the Marsh Strong Building in downtown Los Angeles, at about the time Henry Coit worked there:

The 1920 US Census shows the Coit family has moved to Seattle, Washington - specifically that they were living at 619 Thirteenth Avenue in Seattle.  A modern apartment building stands on that spot today.  Henry listed his occupation as an "Underwriter of Bonds."  Henry and Kathryn both listed their age as 44.  Henry was 45, and Kathryn was 47.

By 1927 the Seattle Directory listed Henry as the "Secretary and Manager of the National Funding Company," and the family living at 2476 Second Avenue North in Seattle.  That number does not seem to exist anymore.

By the time of the 1930 US Census, the stock market has crashed and I would imagine there was not a lot of call for Bond Underwriters.  Henry, Kathryn and Catherine now lived in Chicago - in the apartment hotel at 4915 Drexel Boulevard.  They paid $90 per month for their apartment.  Henry was now the "President of a Crediting Company."

By the 1940 US Census, Henry Coit was retired and he and Kathryn were living with Catherine and her husband George at 4143 Simpson (Golf Road) in Skokie, Illinois:

Strangely, Henry now reports his age as 62, and Kathryn as 66.

Kathryn Howard Coit died on June 7, 1944 in Evanston, Illinois.  She was 70 years old.  Unfortunately I was not able to find an obituary for her, nor was I able to find anything about her and her canaries.  Henry Coit was still alive, so he may have had something to do with seeing Kathryn's post-mortem request was carried out.  The photo at the beginning of this article shows that the birds are still in good shape - almost four years after the death of their mistress.

Here's the current view from the same angle as the news photo: 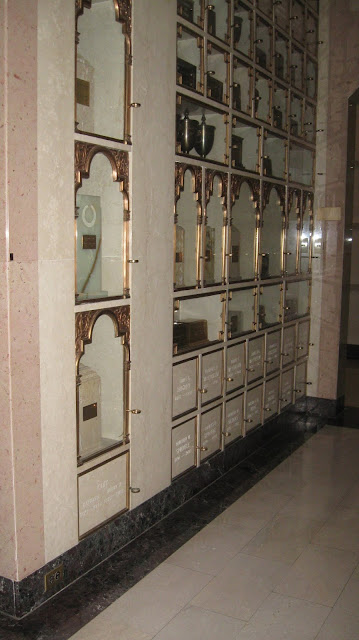 Here's the view looking into the hall from the opposite side.  Mr. & Mrs. Coit would be on the lower side of this photo toward the middle: 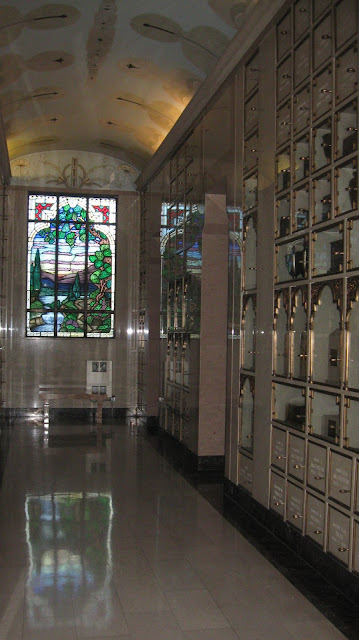 Henry Coit died on March 23, 1952 in Chicago - no mention of any unusual post-mortem requests.

Kathryn and Henry Coit's daughter Catherine Coit Jackson died June 18, 2015 in Paonia, Colorado at the age of 101.  No mention of canaries in her obituary.

I was unable to discover any additional information on the lives, deaths or interments of "Charles" or "Audubon."

At this point, I guess this ends the story of Kathryn Coit and her canaries.  There is no one left at Memorial Park who was there in 1944 - in fact the ownership is not the same either.  Memorial Park, like Rosehill, is now owned by Service Corporation International.

What about the young lady who took care of the birds - Shirley Johnson of 811 South Boulevard in Evanston, Illinois?

Here's Shirley's yearbook photo from my alma mater, Evanston Township High School (Go Wildkits!)  She was in the Class of 1940:

Shirley Cedarquist Johnson died on January 30, 2013 in Tucson, Arizona.  She was 89 years old.

It is not recorded how long she worked for Memorial Park Cemetery, or how long she took care of the pet canaries of the late Mrs. Henry Coit.

A note to my loyal readers:  This article is the first one I have posted to this blog in almost one year.  For those interested, I will continue excerpts from the biography of Cornelia Lunt as the year unfolds.  In the meantime, I have retired (Yay!), so my New Years resolution for 2019 is to post at least one article every month.  I enjoy finding these stories and digging up the facts to go along with them.  For this current story, it took me longer to find all the facts about Shirley Johnson than it took to research and write the entire rest of the article.

Future stories will include the tale of the warrior priest and Wilmette pioneer Monsignor Edward Vattman, and a story of a monument created by famed mausoleum builder Sidney Lovell.  Please stay tuned!
Posted by Jim Craig at 7:43 PM No comments: