Recently in this blog I told the story of Mrs. Charles Leaming Tutt and her stay at the Hotel Del Coronado in 1909:


When I was researching her story I came across a strange statement in the Los Angeles Times obituary for Charles L. Tutt from their edition of January 22, 1909 (see highlighted area): 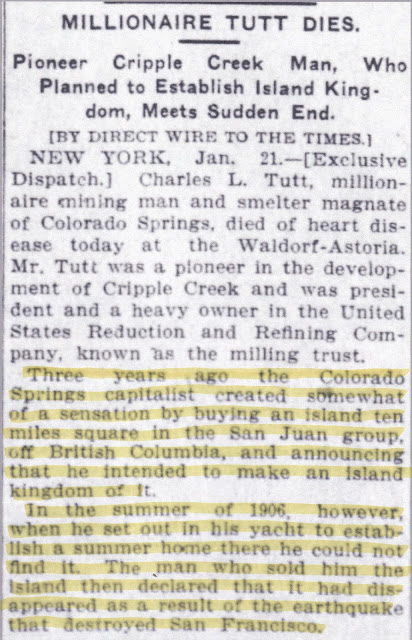 Several readers questioned the story of Tutt's "disappearing island."  Well, it turns out that the island not only disappeared as a result of the San Francisco Earthquake, it reappeared as well.

Evanston historian (and reader of my blog) Mike Kelly sent me the following link that tells the whole story:

It comes from a blog called "Cascadian Alert."  Like Mike, I was originally skeptical when I read the LA Times story, but Mike, being the outstanding researcher that he is, decided to dig a little deeper to see if he could find out anything further about Tutt's disappearing island.

Then Mike was able to find yet another article about Tutt's mysterious island:

Truth really is stranger than Fiction.

Thanks again to Mike who led us to (as Paul Harvey would say) "the rest of the story."