WHO MISPLACED THEIR INVITATION TO HENRIETTA COOLEY'S BRIDGE PARTY IN 1935? Edyth Cabeen Griffin

You may remember the blog article I wrote in 2016 about restaurateur Roy Cooley and his wife Henrietta:

Googled this name on a Bridge Invitation for Mrs. Roy William Cooley from 1935.  We took out an old bookshelf that was attached to the wall where we found the invitation in back laying against the baseboard.  We are at 821 Forest Ave. near the Cooley's Michigan Ave place they live in the 30s according to your article.  Thought you would get a kick out of it.

Bryan was correct - I did get a kick out of seeing the old invitation from Henrietta Cooley for her Luncheon-Bridge party 84 years ago: 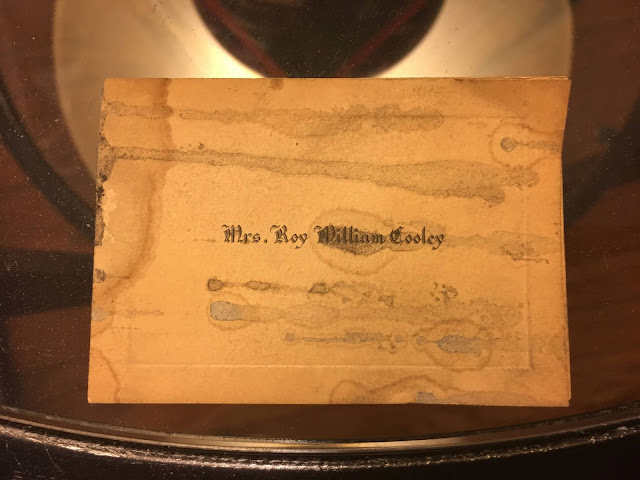 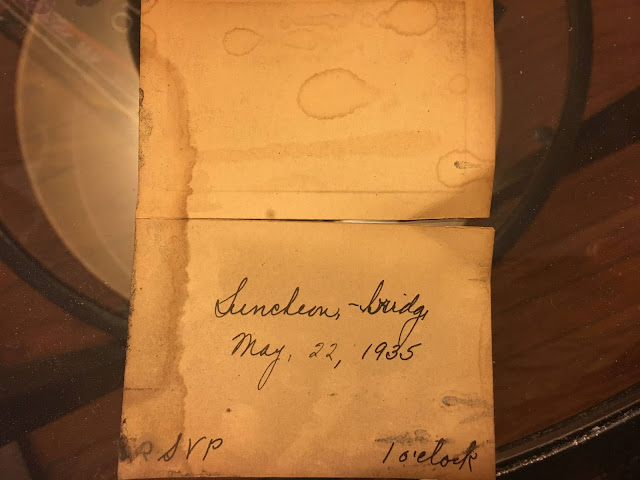 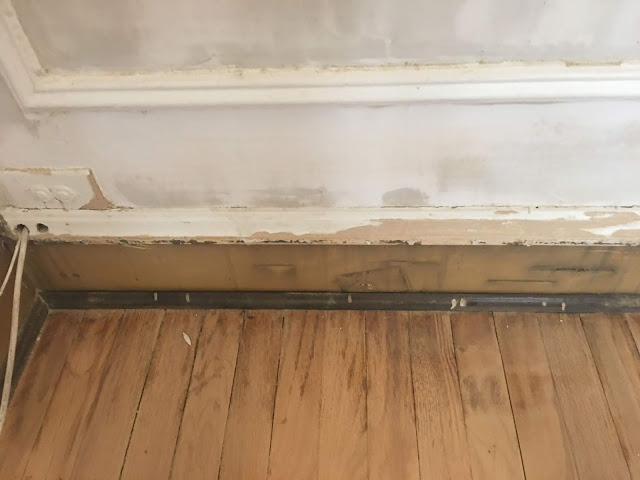 As Bryan said, Roy and Henrietta Cooley had lived at 617 Michigan Avenue in Evanston but by 1935 they had moved to 3045 Normandy Place in Evanston:

I asked Brian if I could tell his story as a follow-up story on my blog to what I had originally written about Roy Cooley and he graciously gave his permission.  The more I thought about the story the more I wondered who had misplaced their invitation to Henrietta Cooley's Luncheon-Bridge party.  The occupant of 821 Forest may have received the invitation in the mail, or perhaps had a bridge party at her place where Henrietta Cooley handed out invitations to her upcoming soiree.  I decided to see if I could figure out who had been living at 821 Forest in 1935 and had been invited to Henrietta Cooley's party.  It turned out to be more difficult than I had anticipated.

First of all I checked the Evanston Directory for 1935.  Not the telephone directory but the Polk's Directory: 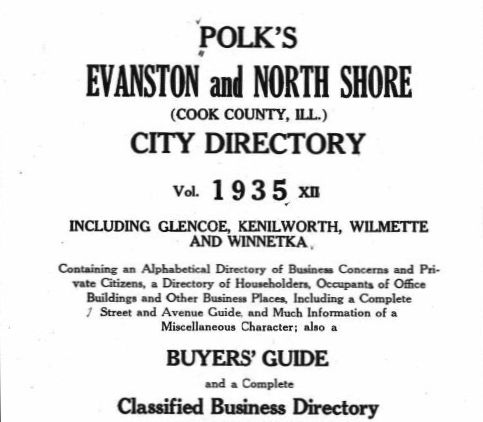 According to the Polk's Directory, the apartment building at 817-823 Forest Avenue was known as the Forest Crest Apartments.  According to Polk's here's who was living there in 1935: 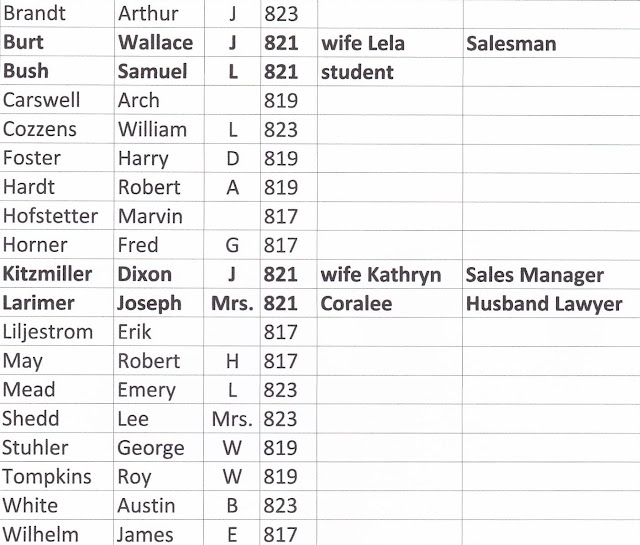 But now I hit a brick wall.  Who had actually been invited to Henrietta Cooley's party?  Was it Lela Burt? Kathryn Kitzmiller? or Coralee Larimer?  And which of them lived in Bryan Ripp's apartment at 821 Forest?  I was stuck.  I decided to take a ride over to 821 Forest to see if I could get any inspiration from being at "the scene of the crime."

Friday July 26, 2019 was a hot summer day in Chicagoland - a beautiful day to take some photographs.  Here are some photos of 817-823 Forest I took this past Friday: 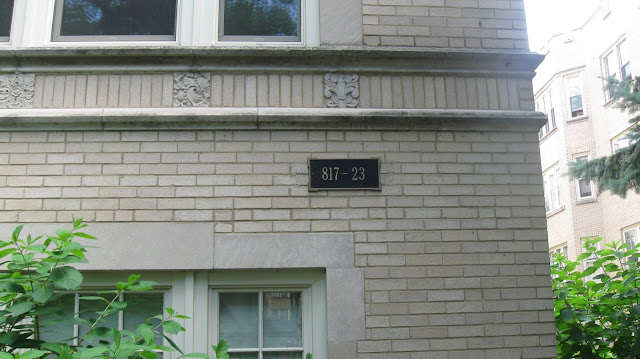 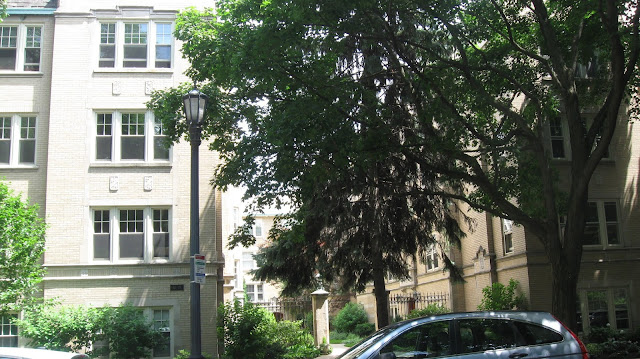 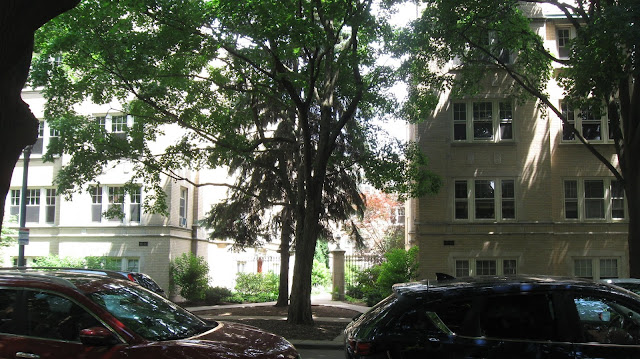 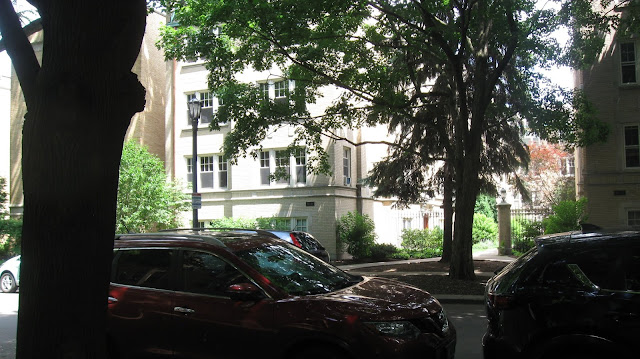 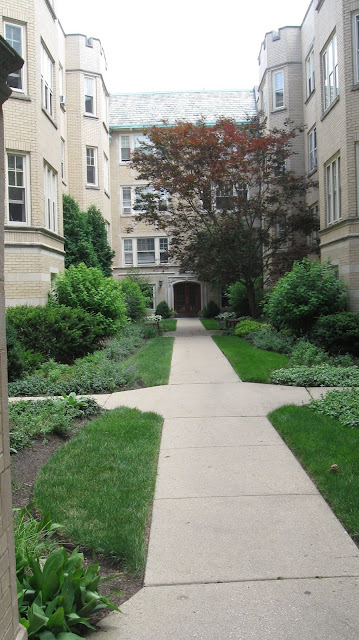 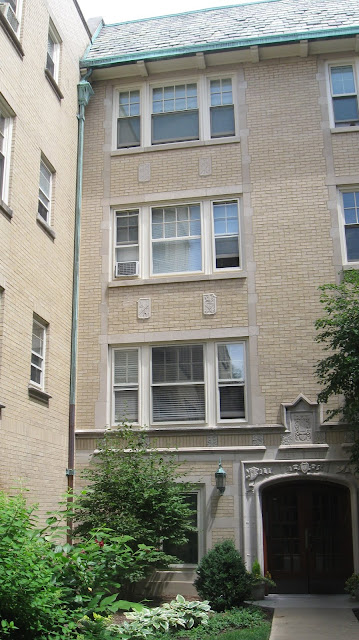 821 Forest is on the left side of this photo 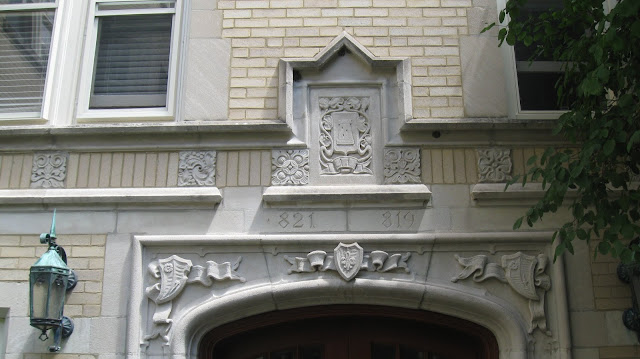 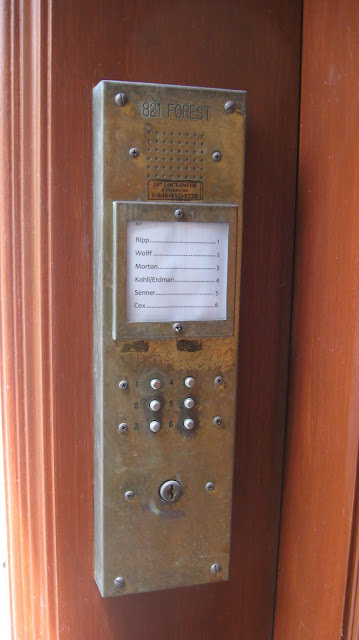 Bryan Ripp lives on the first floor at 821 Forest.

I enjoyed seeing the beautiful vintage building at 821 Forest but that got me no closer to my goal of finding out who had lived at 821 Forest - First Floor, who had received an invitation to Henrietta Cooley's party.

I remember that Bryan had sent some additional photos so I thought I'd take a look at them again:

Bryan's email said: "FYI...Pictures of some bridge cards found along with the invitation." 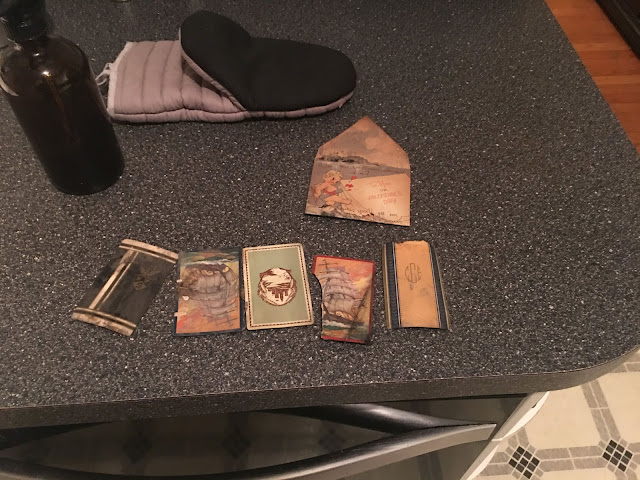 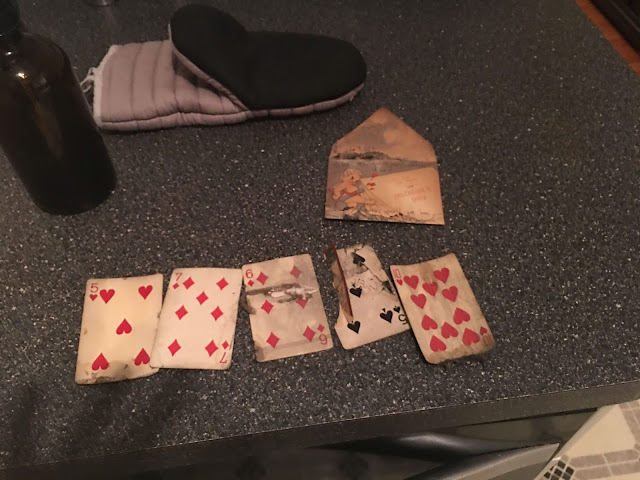 I took a look at the cards and saw that one had a monogram on it: 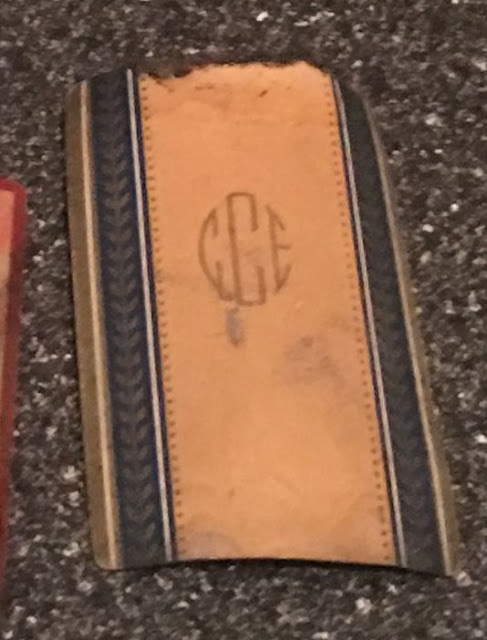 Unfortunately ancestry.com does not have the 1936 Polk's Directory so I had to look elsewhere.  I decided to check the Chicago newspapers in newspapers.com for "821 Forest Avenue" in 1935.  And here's one of the entries I found: 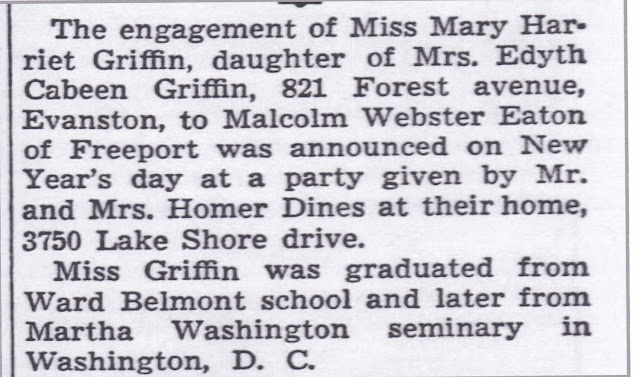 Mrs. Edyth Cabeen Griffin, 821 Forest Avenue.  So now we know it was Edyth Cabeen Griffin who had been invited to Henrietta Cooley's bridge party and lost her invitation under the bookcase.  How did she lose it?  Perhaps she had hosted a bridge party at her apartment where Henrietta passed out the invitations to her upcoming party.  Cleaning up after the party Edyth may have gathered up a bunch of papers, etc., and unbeknownst to her some of the papers fell on the floor and slipped under the bookcase.  She may not have even known she misplaced the invitation or knew that it had slipped under the bookcase and was not retrievable.

Now that we have solved the mystery of who misplaced their invitation to Henrietta Cooley's Bridge Party, let's see what we can "dig up" about Edyth Cabeen Griffin.

On June 27, 1906 Edith May Cabeen married Truman Alvah Griffin (1875-1940) in Aledo, Illinois.  Truman Griffin was a dentist.  He had been previously married to Bertha Ethel Auld who had died in 1902 from complications of the birth of their son Truman Aulden Griffin (1902-1970).  Truman Griffin was raised by his aunts.

After their marriage, Edith and Truman Griffin relocated to Macomb, Illinois.  All of their children except Betty Jane were born in Macomb.  I was unable to find the Griffin family in the 1910 US Census.

By 1917 the Griffin family relocated to Cedar Rapids, Iowa where Dr. Griffin established his dental practice in the American Trust and Savings Building. 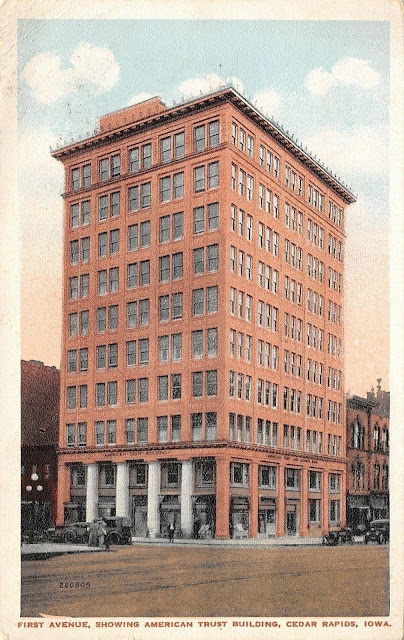 The 1920 US Census finds the Griffin family living at 1727 Grande Avenue in Cedar Rapids, Iowa:

The family consisted of Truman, Edith, Robert and Mary Harriet.  They were also renting rooms to two stenographers:  Helen Robb and Laura Tunley.  They told the census taker that they owned the house.  Dr. Griffin was a dentist, the children were at school and Edith was a homemaker.  Betty Jane Griffin would not arrive on the scene until December 20, 1920.  There must have been a problem with the registration of Betty Jane's birth because she had to get a Delayed Birth Certificate in 1972.

By 1930 the family had surprisingly moved to an apartment building at 1238 Fourth Avenue in Cedar Rapids:

Their rent was $65.00 per month.  The family now consisted of Truman and Edith and their three children.  Dr. Griffin was still a dentist.  Interestingly, Edith Griffin is now spelling her name "Edyth."

By 1933 Edyth and Truman Griffin were divorced.  Both were still living in Cedar Rapids, but separately.  By 1934 Edyth Griffin had left Cedar Rapids and by 1935 was living at 821 Forest Avenue, Evanston along with her three living children: Robert, Mary Harriet (now going by Harriet) and Betty Jane.  History does not record why she picked Evanston as her new home and we know that she did not stay in Evanston for too long.

In 1939 Edyth Griffin was reporting herself as the "Widow of T. A." although T.A. Griffin did not die until 1940 - wishful thinking, or a premonition?

By the 1940 US Census Edyth Griffin was no longer living in Evanston - she had moved to Aledo, Illinois with her sister Harriett Sells.  Edith did not say she was a widow, she correctly reported that she was divorced.  They lived in Harriett's home at 408 S. College Avenue in Aledo:

Edith Cabeen Griffin died on April 17, 1949 at the home of her daughter Betty Jane (Mrs. Sheldon Allen) in Shaker Heights, Ohio.  She was 70 years old.  It is not reported what caused her death, nor was it reported if she was playing bridge when she died.  Here is her obituary from the Freeport Journal-Standard on April 18, 1949: 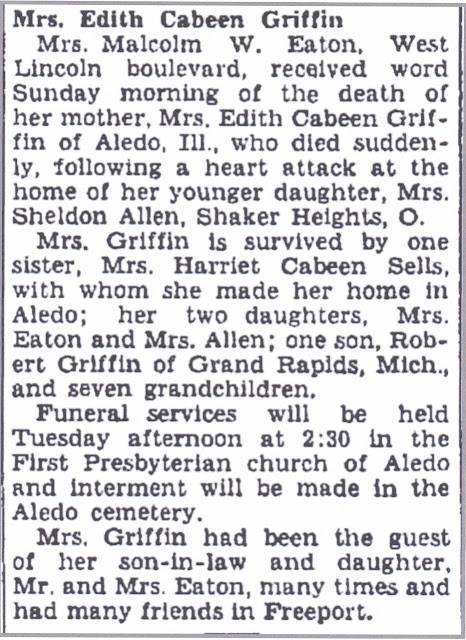 As mentioned in her obituary, Edith Griffin was interred in the Aledo Cemetery.  There was no Find a Grave record for her, and Aledo is 211 miles from where I live, so driving out to get a grave photo was unlikely.  I reached out to Find a Grave volunteer Matt Van Winkle and he was very willing to go to the Aledo Cemetery and take the appropriate photos for me.

Edith Griffin is interred in the Community Mausoleum in the Aledo Cemetery below the crypts of her sister and brother-in-law: 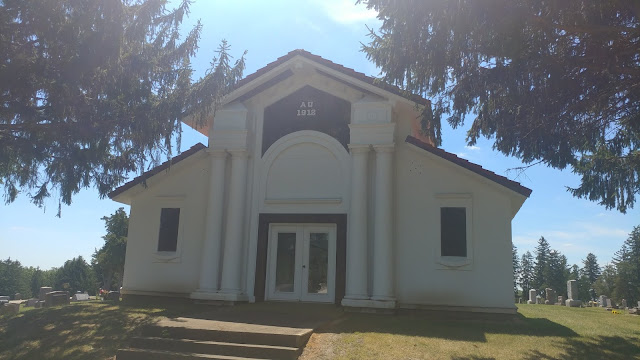 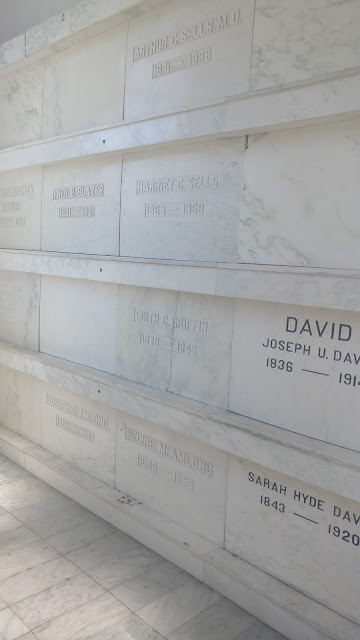 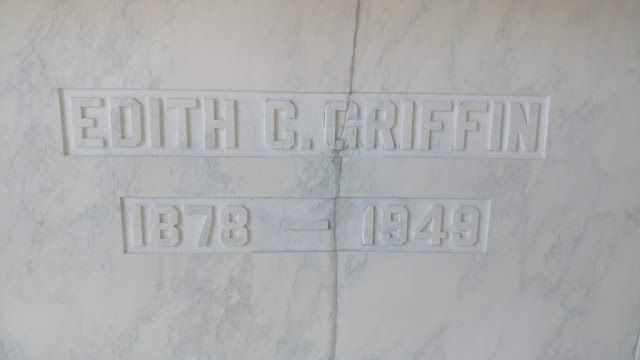 We'll never know who won the bridge game at Henrietta Cooley's on May 22, 1935, or if Edyth Cabeen Griffin was even able to attend.  But I'm sure we do know that a good time was had by all.

May Edyth Cabeen Griffin and all Henrietta Cooley's bridge players rest in peace.