WHAT'S IN A NAME - Good Luck and Good Day Mizrahi

Tucked back in a corner of Jewish Waldheim Cemetery, behind Gate 42 - Workmen's Circle, is Gate 41A -  Portugese Israelite Cemetary (sic). 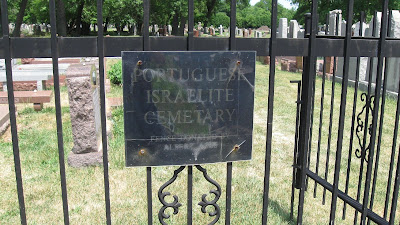 This is one of the prettiest and most unusual sections of Jewish Waldheim.  Most of the Jews who settled in Chicago are Ashkenazi Jews, but there is a small but vibrant community of Sephardic Jews in Chicago.  The people buried in Section 41A are Sephardic Jews.  A good explanation of the difference between Ashkenazim and Sephardim can be found here.
The graves in this section are very close together and marked with tall headstones.  Many of the graves are also covered with flat sheets of stone known as ledgers.
One monument immediately caught my eye.  The first thing I noticed was the beautiful artwork on the stone but the next thing I noticed was the unusual names.  The stone marks the final resting place for Yomtov ("Good Day") Mizrahi and his wife Mazel Tov ("Good Luck") Mizrahi. 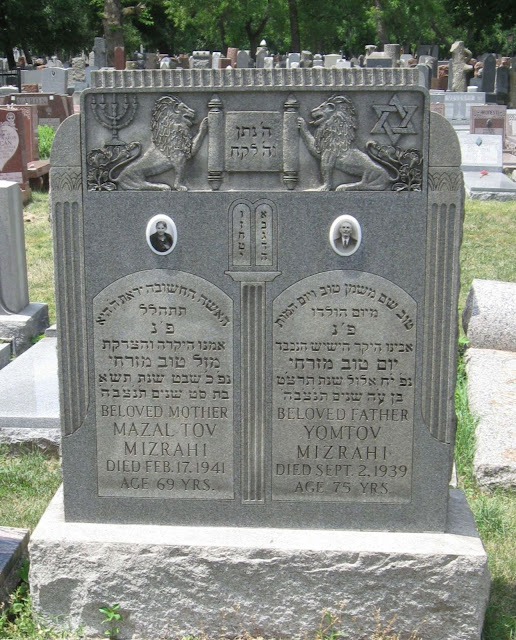 Yom Tov (literally "Good Day") Mizrahi was born in Andrianopolis, Turkey about 1864.  His death certificate has his first name as "Sabato" or "Sabbath", truly a Good Day.
The manifest from the USS President Wilson from September 11, 1920 shows the arrival of "Sabot" Mizrahi along with Signuron Mizrahi and David Mizrahi.
An interesting side note:  The Mizrahi family was detained upon their arrival in the US.  The reason for detention was "LPC" or Likely to Become a Public Charge.  Sabot Mizrahi admitted to being 60 years old and probably showed the signs of living a hard life in Turkey.  Believe it or not, in 1920 if they thought you would end up on Charity, they could send you back where you came from.  This is a lesson that could be re-learned by today's Immigration Service.  To be admitted into the US in 1920, you had to be a productive citizen.  How times have changed.  A hearing was held, and the Mizrahis must have been able to convince the immigration officer that they would be productive citizens because they were admitted to the United States.
Sabot's wife "Mazaltan" Mizrahi arrived in the US aboard the SS Agropolis on June 25, 1921.  According to the manifest, she was born in Turkey, was 52 years old and had been living in Constantinople.  Along with Mazaltan were her daughters Mary and Rose, son Moise, and grandson Mordo.  Mazaltan's reason for coming to the US was "going to husband".
One of the questions that immigrants had to answer was what language they could read and/or write.  Most Ashkenazi Jews responded that they were fluent in Yiddish - a combination of German and Hebrew. Most Sephardic Jews indicated that their language of choice was Ladino - a combination of Hebrew and Spanish.  The Mizrahi family noted that their preferred language was "French".
The Mizrahi family arrived too late to participate in the 1920 Census.  Let's see what has happened to them in the ten years they were in America when it was time for the 1930 Census:
At 1319 Sawyer Avenue in Chicago we find the Mizrahi family living on the 3rd floor (this census taker is one of the few who noted apartment information).
There is the Head of family "Sam" and his wife "Matilta".  They were not employed and could not speak English.  In 1930 their language of choice was "Spanish".  They lived with son Isaac, daughter Mary and daughter Rose.  Also living with them was 15 year old nephew Madi Albalah.  Their rent was $60.00 per month.
"Sabato" Mizrahi died on September 2, 1939 of heart disease: 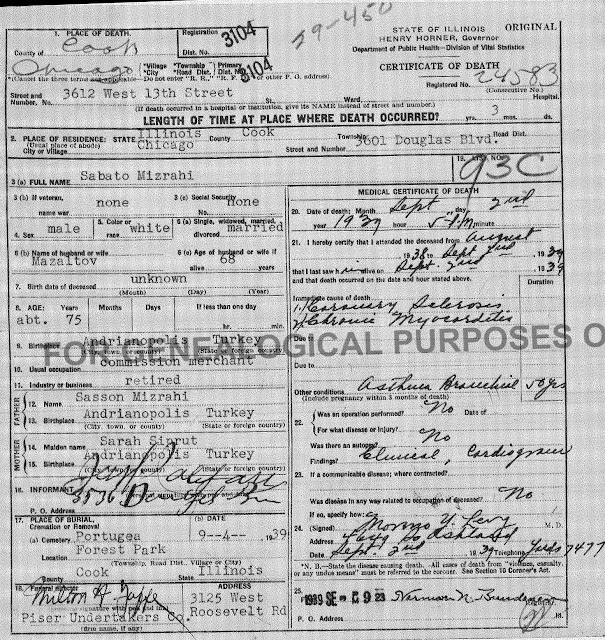 By then he was living at 3601 Douglas Boulevard.  Unfortunately nothing is left there but a vacant lot.
The family purchased a beautiful monument to mark the graves of their dear parents: 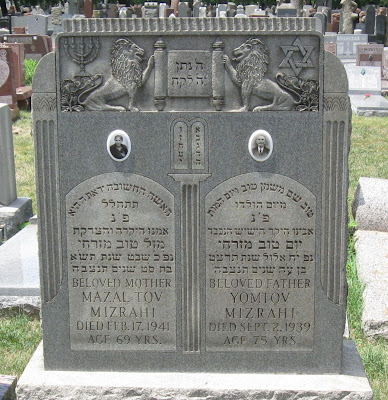 The translation of his inscription is:
"A good name is better than good oil
and day of death than day of birth
Our old and honoured father Yom Tov Mizrachi"
I did not think I would be able to locate the death certificate for Mazal Tov Mizrahi.  I knew from the tombstone that she died in February of 1941.  I looked under "Mazal Tov" Mizrahi - nothing.  I looked under "Mazaltan" Mizrahi - nothing.  I even looked under "Matilta" Mizrahi - still nothing.  Only by accident did I stumble upon the death certificate of Mazal Tov Mizrahi - under "Fortune Mizrachi"! (actually Fotrune)
She died February 18, 1941 of heart disease at 1302 S. Central Park Avenue in Chicago,  Unfortunately, another vacant lot.
.
She was laid to rest next to her husband the next day, February 19, 1941.  The inscription for Mazal Tov Mizrahi is:
"The worthy and God-fearing woman, may she be praised
Our dear and righteous mother Mazel Tov Mizrachi"

Yom Tov Mizrahi and his wife Mazal Tov Mizrahi - from Turkey to Chicago.  They traveled thousands of miles to find a new home but never forgot their Jewish heritage.  We should all be so blessed to have such a Good Day and Good Luck.
May they rest in peace.
Posted by Jim Craig at 5:27 PM