I have always been fascinated by the tombstones that are made to look like trees.  Recently I was reading a blog article about them and learned a lot of things about them that I didn't know.  First of all, I always thought they were made of cement that had been molded when in reality they are hand-carved from limestone.  I also learned that many were customized with symbols representing the life and/or death of the person buried there.  I also found out that many, but not all, of the tombstones were obtained through the Modern Woodmen of America and the burial insurance they used to sell. 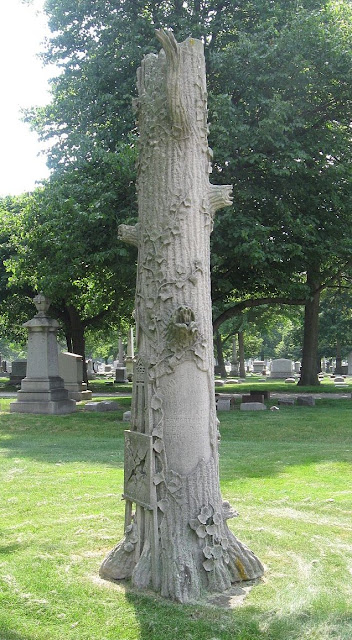 I went back this past weekend to take some more photographs and see what I could tell about the departed from looking at the stone.  The tree marked the resting place of Frank F. Campbell - the stone said: 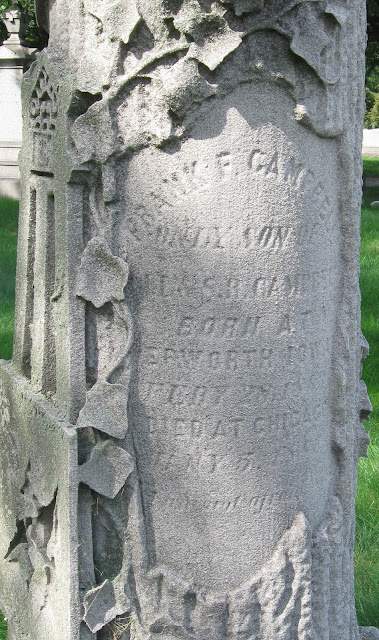 The 1880 Census shows that the Campbell family was living in Evanston, Illinois.  James L. Campbell was a Deputy-Sheriff, his wife "Phronia" (short for Sophronia) was "Keeping House", and 17 year old Frank was "At School".  Frank was an only child.  Evanston was not large enough in 1880 for the census taker to note the street address of the Campbell home (if there even was one).  The 1890 census is gone and by 1900 both Frank and Sophronia were dead.

With the information I had it was easy to find Frank's death certificate on Family Search:

Frank died just short of his twentieth birthday from an "abscess of the lungs".  He had been ill for three weeks. According to his death certificate, Frank had been an "Artist".

With the information I now knew about Frank I took another look at his tombstone - and really saw it for the first time.

I noticed that the tree had been carved with numerous symbols pertaining to the work of an artist, and even symbols of the artist himself:

Taking a closer look I saw an artist's palette hanging from a rope, with brushes stuck into the palette.  There is an easel, at the top of which is a stylized version of Frank's initials: FFC.  On the easel is a canvas that has been ripped apart - a symbol, I assume, of a life cut short, or work ended unexpectedly.

The other side of the tree had the information on Frank's parents, but no symbols other than the ivy growing up the trunk:

Frank Campbell's parents left us a wonderful testimonial to their son the artist.  Now that I know what to look for I will take a closer look at other tree tombstones I encounter and suggest you do the same.

Frank Fremont Campbell, artist - a life cut short - a work unfinished.  He was not afraid.

May he rest in peace.


There is a very informative blog that talks about what he calls "Tree stump gravestones".  It is called "Gravely Speaking":

The website that contains The Glossary of Victorian Cemetery Symbolism can be found at: