THINGS ARE NOT ALWAYS AS THEY SEEM - Waldo Deagan

I have mentioned before that I have relatives in Section S of Rosehill Cemetery in Chicago.  When I visit their graves I often wander around the area to look at the other tombstones nearby.  One of the wonderful things about Rosehill is that you can find something interesting and historic wherever you look.  On a recent trip to their graves I saw a very unusual tombstone:
Certainly unique, the tombstone for Waldo Deagan was carved out of a massive boulder.  It was carved to look like a mountain and along the bottom of the stone is carved "Nature-Science-Music".  What can we find out about Waldo Deagan who died in 1912 at the age of seventeen?  From the looks of his tombstone he was an explorer, or a mountain climber or a conservationist.  Actually, the opposite seems to be the case.  According to his death certificate, Waldo Deagan was a bookkeeper (not that there's anything wrong with that). 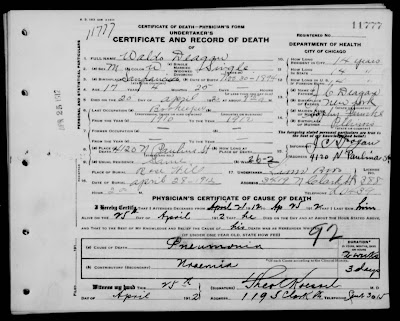 Waldo Frederick Deagan was born in San Francisco, California on November 30, 1894, the second son of John Calhoun Deagan and Sophie (nee Funke).  He joined his brother Jefferson Claude Deagan, who was born in 1886.  We can conclude that the Deagan family moved around quite a bit because Jefferson was born in Missouri, Waldo in San Francisco and by 1900 the Deagans were living in Chicago, at 459 S. State Street.  There had been another son, Michael Roy Deagan, who died in infancy.  A skyscraper now occupies the block that used to contain 459 S. State Street.
The 1910 Census found the J.C. Deagan family living at 1234 W. Grace in Chicago.
Fifteen year old Waldo was working at the factory his father owned in Chicago that made bells.  A sister to Waldo, named Marion Vita, came along in 1902.
J.C. Deagan, Inc. was a noted manufacturer of bells and other musical instruments including the carillon bells in the Tribune Tower.  Here is an ad from 1912: 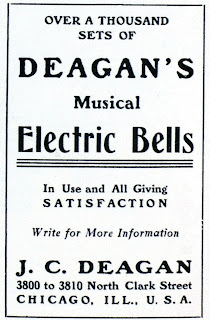 Nothing more about Waldo Deagan until the sad news from the Chicago Daily Tribune of April 26, 1912:
DEAGAN - Waldo Deagan, April 25, at the age of 17 years, dearly beloved son of Mr. and Mrs. J.C. Deagan; fond brother of Claude, Vita, and Ella Deagan.  Services at Rosehill chapel, Sunday, April 28, at 2:30 p.m.  (Ella was the wife of Claude Deagan).
That's all we know about the short life of Waldo Deagan.  Did he die in Africa on a scientific expedition?  Did he die attempting to climb Mt. Everest?  Did he die in the Amazon jungles?  No, he died at home, 4120 N. Paulina in Chicago, of pneumonia and uremia.
Why was "Nature, Science, Music" inscribed on Waldo Deagan's tombstone?  Why does his tombstone look like a mountain peak?  We may never know.  We do know, however, that seventeen-year-old Waldo Deagan died too soon to achieve his potential, whatever that may have been.
May he rest in peace.
Posted by Jim Craig at 3:30 AM