The mild winters we have been having in Chicagoland lately have been great for my cemetery research.  In years past I usually had to stop doing outdoor grave photography in December and couldn't start up again until April, but last winter I was able to do outdoor photos all winter and this winter (so far) has been great as well.

On a recent afternoon trip to Rosehill Cemetery I came across this unusual tombstone: 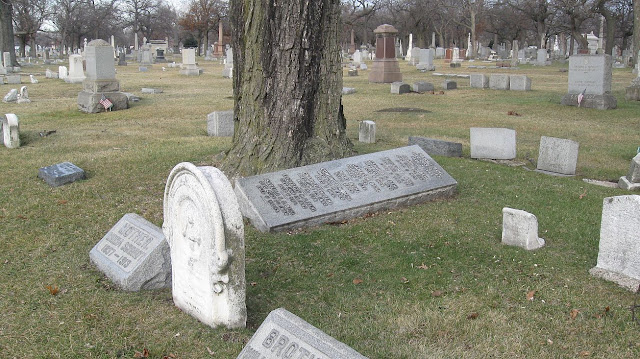 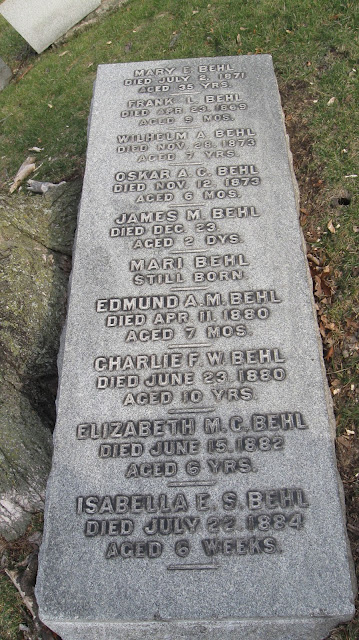 It was a rather large tombstone that seemed to mark the final resting places of ten members of a particular family - all but one of them infants or small children.  So, let's see what we can find out about the Behl family.

Let's start at the top:

Unfortunately there is not a lot of information out there about Mary E. Behl.  She does show up in the 1870 census as the wife of Christian Behl.  Christian Behl is a tailor, and is 36 years old in 1870.  Mary is 33, born in North Carolina, "Keeps House" and is the mother of three-year-old William and 10/12 year-old Charles, born in August of 1869.  They live in the 4th Ward of Chicago and their "Personal Estate" is worth $300.00.

Mary died in July of 1871, but the Great Chicago Fire was in October of 1871 and all the records burned, so this is all I have been able to find out about Mary Behl.  We don't know her maiden name, her parents' names, we don't know where she met/married Christian Behl, and we don't know if there were any other children from the union of Christian Behl and Mary.

The next name on the stone is Frank L. Behl, Died Apr 23, 1869, aged 9 mos.  We can infer from the date that Frank was the son of Mary and Christian, but Frank didn't live long enough to make it to the 1870 Census.  In fact, other than his tombstone, I could not find any evidence that Frank L. Behl had ever lived.  No birth certificate or birth record, no death certificate - not that unusual for that time period but frustrating for a genealogist.

The next entry Oskar A.G. Behl, Died Nov. 12, 1873, aged 6 mos.  As frustrating as this is turning out to be, I could not find anything on Oskar either.  I was thinking that perhaps this was a lost cause.

The next entry was even more frustrating:  James M. Behl, Died Dec 23, aged 2 days.  Just "Died Dec 23" - no year, but if the stone is chronological James lived and died after 1873 and before 1880 - but no luck finding anything on James.

Next Mari Behl - Still Born.  Very few places kept track of still born babies in the old days, and many still do not, so I doubted that I would find anything on Mari Behl, and I was right - nothing.

and a death certificate: 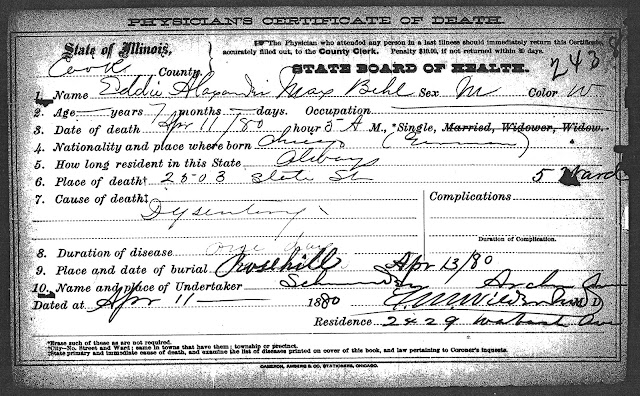 It turns out that Eddie's full name was Edmund Alexander Max Behl and he died from dysentery.  He had only been sick for one day.

Now I was on a roll...what would I find out about the next name on the tombstone Charlie F.W. Behl, Died June 23, 1880, aged 10 yrs.  I could not find any record of Charlie's birth, but his death was well documented:


Charlie died "By reason of being accidentally run over by cars of C.R. & P. Railroad while stealing ride on freight train."  As tragic as this was, it was made even worse by the fact that Charlie's brother Eddie had just died  just a little over two months previously.

Next on the tombstone is Elizabeth M.C. Behl, Died June 15, 1882, aged 6 yrs.  Elizabeth's birth is recorded in the Illinois Birth Register, and her death is recorded as well:

Last, but not least, this brings us to the final name on the tombstone Isabella E.S. Behl, Died July 22, 1884, aged 6 weeks.  Here is the birth certificate of Isabella Eva Sophie Behl:

and her death certificate from a mere six weeks later:

So, that is the story of the Behl family, buried beneath a large stone monument in Rosehill Cemetery. But wait - there's more.  In fact there are so many members of the Christian Behl family, and so many births and deaths, that I had to put together a spreadsheet to keep track of all of them.  When I found the graves of Christian Behl and his second wife Hermine Selle Behl I found surprises waiting for me there as well.  Next Friday February 1, will be One Man's Family - Part Two - The Rest of the Story.
Posted by Jim Craig at 3:29 AM