HIS PARENTS REFUSED TO BELIEVE HE WAS DEAD - George F. Gindele

Readers of the Chicago Daily Tribune of April 14, 1926 may have seen an interesting teaser in the "Local" Index:

It was followed up by the story itself buried back on page 15:
MYSTERY VEILS BOY'S REPORTED DEATH IN RIVER
Body Unfound; Kin Deny Gendele Is Victim

Mystery surrounding the supposed drowning in the Des Plaines river on Monday night of George Gendele, son of Dr. George W. Gendele, a health inspector of Park Ridge, deepened last night upon failure of police to recover the body, and upon the insistance of the Gendele family that the victim was not George Gendele. ﻿

... an aunt declared to police a disbelief that the victim was Gendele.  He had no reason to wish to kill himself, she said, since he was completely recovered from a recent illness and appeared in the best of spirits when seen last Monday.

Mr. and Mrs. H.W. Ensver, 1820 N. Keeler avenue, who were driving along Touhy avenue, Park Ridge, saw a youth struggling in the river.  When near the bridge, they said, they noted the boy, wearing a dark cap and a gray overcoat, seated on the railing gazing absently into the water.  A monent later they heard a splash and, looking back, saw him struggling frantically against the strong current.

Belief that the victim was Gendele was formed when Dr. Gendele reported his son to police as missing.  He said George had accompanied him as he made a call in the vicinity of the Touhy avenue bridge and had unaccountably disappeared after being left alone in the car.
Father In Nervous Collapse.
Yesterday the father was said to be in a state of nervous collapse and could not be seen when the Gendele home was visited.

County highway police spent a day in fruitless dragging of the river.  The swollen condition of the stream, together with the swiftness of the current, probably resulted in the body's being carried downstream a considerable distance from Touhy avenue, in the opinion of Capt. LeRoy Davidson.

A tragic story, to be sure.  Before we see what ultimately happened, let's take a closer look at George Gindele and his family.

The story of young George Gindele did not have a happy ending as evidenced by the Chicago Daily Tribune of April 30, 1926:
INDIAN GUIDES FIND GENDELE'S BODY IN RIVER
The body of George Gendele, son of Dr. George W. Gendele, a health inspector of Park Ridge, was recovered yesterday from the Des Plaines river near Morton Grove by two Indian guides from Stillwater, Mich. They were employed by the family to search for the young man. Gendele, who had been missing for two weeks, was last seen sitting on the Touhy avenue bridge a half mile from where he either fell or jumped into the stream.  He was 28 years old.
An inquest will be held at 3 p.m. today at Schmidt's undertaking rooms, 3834 Irving Park boulevard.  The funeral will be tomorrow at 2 p.m. from the undertakers, burial at Ridgmont cemetery.
Mr. and Mrs. H.W. Enswer, 1820 North Keeler avenue, were driving over the bridge on April 13, the day he disappeared, and saw a man struggling in the water.  Yesterday they identified Gendele. 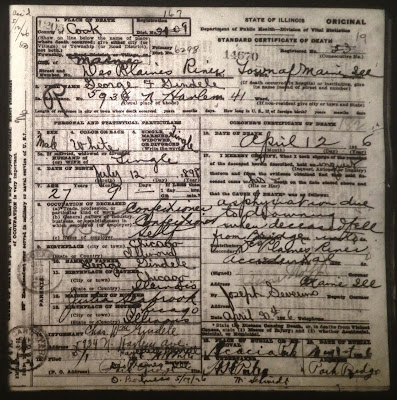 At the time of his death, George was living with his parents at 5934 N. Harlem Avenue in Chicago.

Here is George's obituary from the Chicago Daily Tribune of April 30, 1926:

I have passed over the Des Plaines river bridge on Touhy thousands of times, but now knowing what happened there in 1926, I went back and took a good look.  I'm sure the area was not as built up in 1926 as it is today, but in this section the Des Plaines river meanders through forest preserves so we can get a rustic feel for what was there.
Here is the approach to the south side of the bridge: 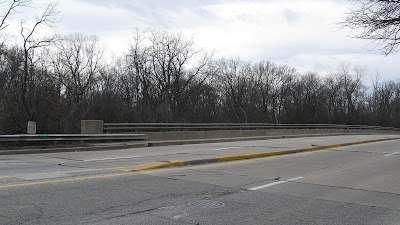 Looking over the rail at the river: 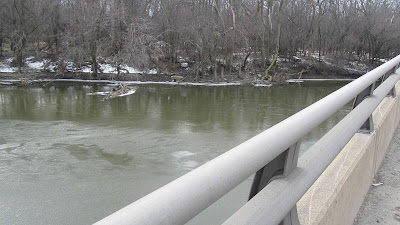 Looking down the river - this is the direction George's body would have taken after he fell in: 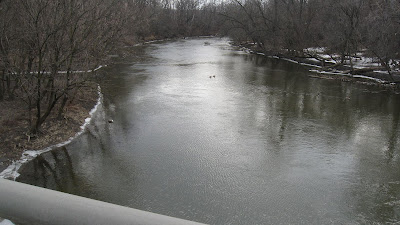 Another look down the river: 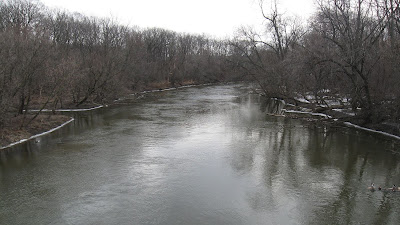 These photos were taken in February.  In April, when George fell into the river, the water level would be much higher from the spring rains, and the current would flow much faster and be much stronger than it is in these pictures.  Whether George fell into the river or jumped, once he was in the cold water he would have been unable to fight the current as he was swept downstream.
As it says in his obituary, George is buried in Acacia Park cemetery. In 1926 Acacia Park was strictly a Masonic cemetery, and one had to be a Mason or related to a Mason to be buried there.  George lies in the midst of his family: 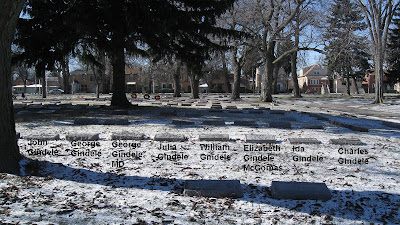 We will never know what happened that day in April of 1926 on the Touhy avenue bridge over the Des Plaines river.  We will never know if George Gindele fell or jumped, but we do know that whatever happened, it cost him his life.  A life cut short, a death too soon.
May George F. Gindele rest in peace.
Posted by Jim Craig at 4:47 AM