The name "Boltwood" is familiar to every Evanstonian.  One of the divisions of Evanston Township High School is named Boltwood and one of the largest parks in Evanston was named Boltwood until someone with money came along and asked that it be named after a member of their family instead.  So when I was in Rosehill Cemetery recently and came upon this tombstone:

I knew who was buried under that stone.  Who was Henry L. Boltwood and why is his name important to the history of Evanston?  Let's find out.

Henry Boltwood attended Amherst College in his home town, and worked summers on the local farms to pay for his education.  While attending Amherst he joined the Alpha Delta Phi fraternity.  The 1850 US Census shows nineteen year-old Henry Boltwood living at home where he listed his occupation as "Student." After graduation he taught in several New England colleges and academies.

Henry Boltwood was a changed man by the time the 1860 US Census was taken.  He was living in Derry, New Hampshire.  He gave his occupation as "Primer. Teacher Academy".  He was also a married man in 1860, with a wife named Helen, and a son, Charles who was four years old in 1860.

When the Civil War broke out, Boltwood  joined the United States Sanitary Commission where he remained to the end of the war.  It was said that although he was not a combat soldier, that Henry Boltwood saw as much of the routine work of a soldier as many of the regular enlisted men. He was present in campaigns through Alabama and Georgia acting in the capacity of a nurse for North and South alike. Here is a photo of Henry Boltwood from the time when he was with the Sanitary Commission:

While part of the Sanitary Commission, Boltwood also served informally as the chaplain of the 67th United States Colored Infantry.

After the war, Professor Boltwood came to Illinois and took charge of the public schools at Griggsville.  In 1867 he organized the first township high school in the state at Princeton.  Great importance was attached to the study of the English language and a reference library was established.  At one time there were ninety students from abroad enrolled and it was said that one third of all the teachers in the state of Illinois had been students of Professor Boltwood at one time or another.

He came to Evanston in 1883, and in September of that same year became principal of the Evanston Township High School.  At the very beginning he strengthened the curriculum. He extended the course of study from three years to four. As the school grew and prospered, he added new teachers to the original staff of five. Gradually it became evident that the old high school building was insufficient for the needs of the growing student population and so in 1899 a new high school building was built around the old high school on Dempster Street at Elmwood: 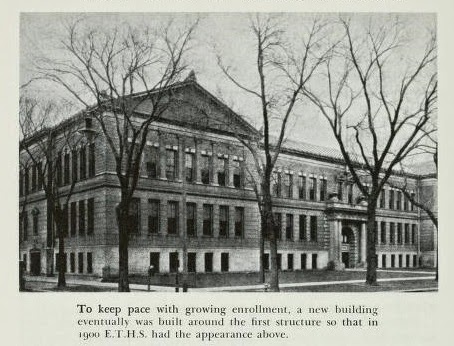 For instance, it came to his notice that the study of spelling was being sadly neglected in many otherwise excellent high and preparatory schools.  Investigating, he found that there was an out and out indifference on the part of many instructors to the importance of spelling.  But there was also the lack of a manual of spelling which should contain not only the simple but even the more unusual and technical words to be met in modern occupations.  Where others might have written an article lamenting the problem, Boltwood instead wrote a spelling manual which quickly came to be used in high schools and academies all across the country.

Boltwood not only was a scholar, speaking five foreign languages and having written textbooks on spelling, grammar and history, he also enjoyed sports.  In college, he was a long-distance runner and often took walks of up to 20 miles. He played baseball and football until he was 45, and had a lifelong fondness for hunting and fishing.

Students of his said that Professor Boltwood used to mingle freely with them in their play, taking all the chances of the game just like any boy.  They said he was very kind to anyone needing help of any kind, and many a pupil is under lasting obligation to him, not only for the general inspiration of his teaching, but also for judicious advice and help.

It was said of Boltwood that in his general management of the school he was a leader rather than a driver.  He attended very thoroughly to what was especially his own work, and he expected others to do likewise with theirs.”

It has been estimated that during his lifetime, Boltwood instructed some 6,000 students. Of those, nearly 1,000 went on to 40 different colleges and became doctors, lawyers, financiers, missionaries, businessmen and educators.

The 1900 US Census showed the Boltwood family living at 1218 Benson (now Elmwood) Avenue in Evanston just up the street from the high school:

The Census shows sixty-nine year old Henry, Helen, also sixty-nine and an "adopted daughter" twenty-three year old Gertrude Boltwood. Henry's occupation was listed as "Principal High School", Helen had no occupation listed and Gertrude's was "Stenographer."  Helen said that she had given birth to one child, who was not living in 1900.  (Their son Charles had died in 1884).

On July 31, 1905, Henry and Helen Boltwood celebrated their 50th Wedding Anniversary.  Here is an announcement of the happy event from the Chicago Daily Tribune of August 2, 1905: 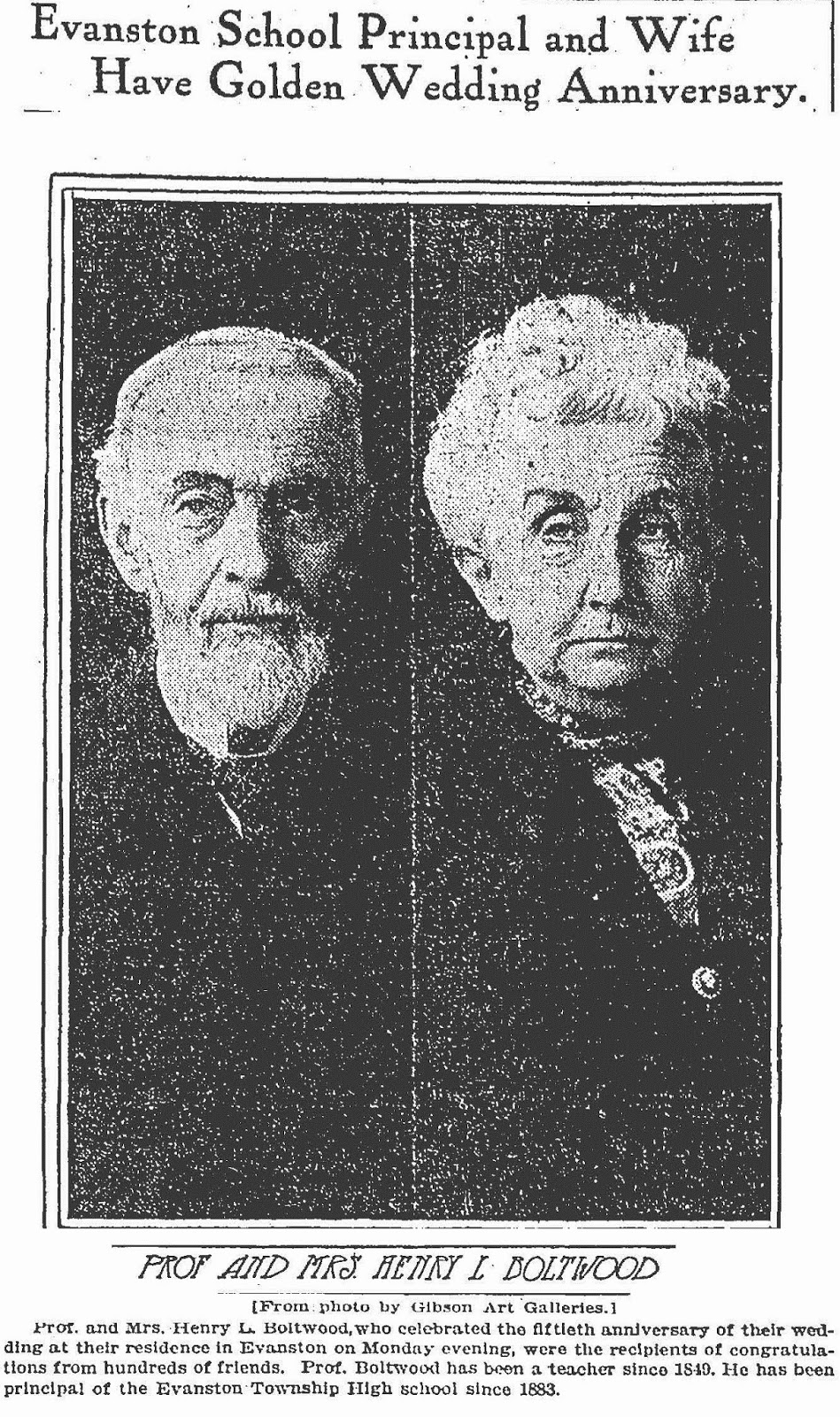 January 23, 1906 was a Tuesday.  After the school day was over, Professor Boltwood told his family that he would be spending several hours at the Evanston Club, of which he was a member, and walked to the building, about one half mile away.  On the way he met several friends with whom he talked, seeming to be in a cheerful mood and saying he was enjoying good health.

After arriving at the Club, he started a game of pool with his friend Professor W.H. Cutler.  Boltwood was an avid pool player and for years it was his usual afternoon recreation.  Having just made a shot, he turned from the table, staggered, and collapsed into the arms of Prof. Cutler.  Cutler and J.F. Ward  carried Boltwood to a couch and sent for a doctor, but by the time the doctor arrived, Henry Boltwood had already expired.  He was 75 years old.

Professor Boltwood was said to have been in good health, although his doctor had warned him that an affection of his heart could cause a collapse.  He had only missed one day in the last decade in his attendance at the school.  The cause of death was "Mitral Insufficiency."  Here is his death certificate: 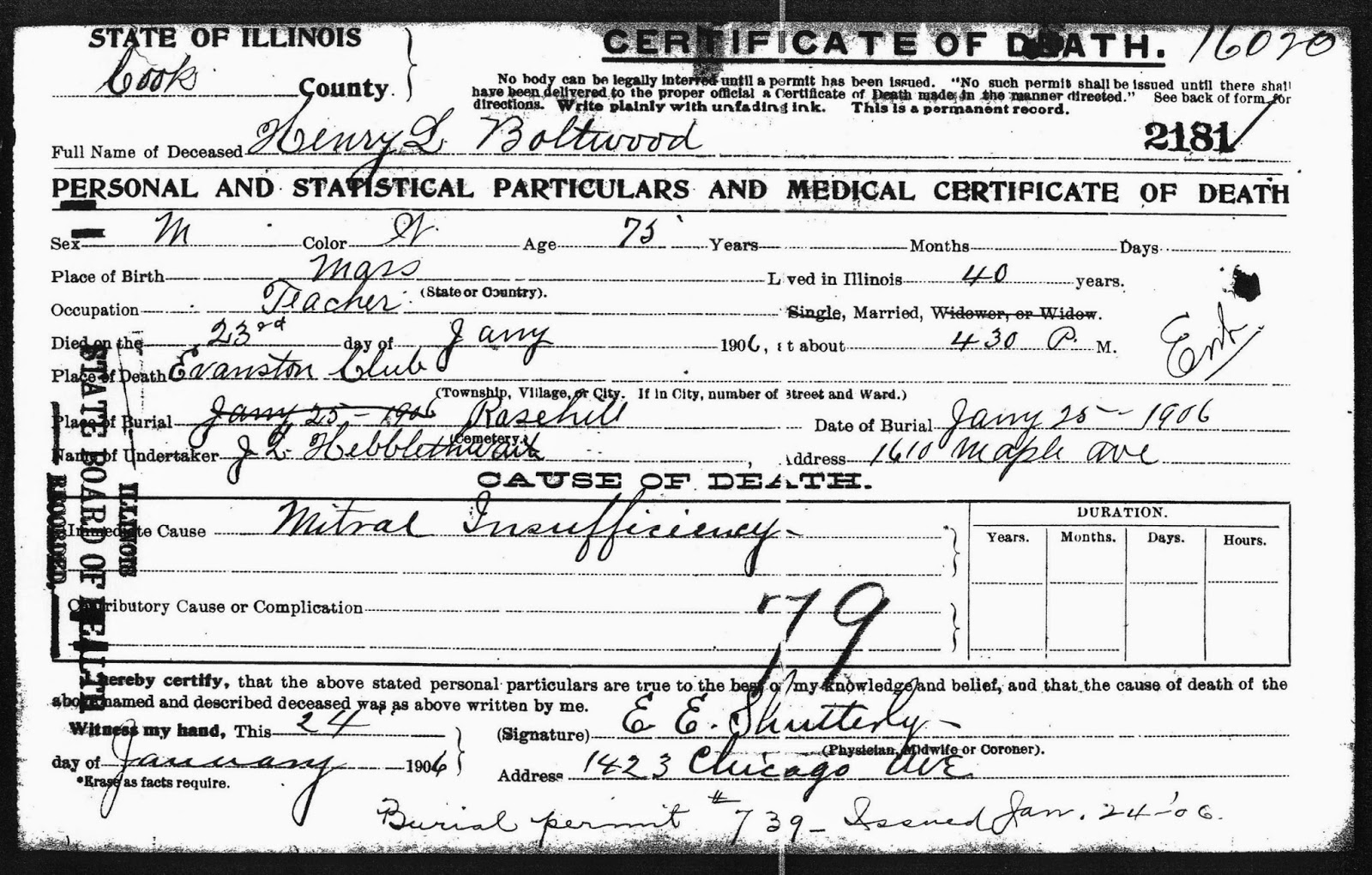 The body, it was decided, would lie in state from 1:00 to 2:30 p.m. Thursday, January 25, in the assembly hall where he had often led services. Twelve high school boys were grouped about the coffin as a guard of honor— classes had been suspended for the week.  Hundreds trooped through the hall that Thursday. The faculty arrived in a body for the services and moved to a special section.  Hymns were sung, a "prominent school athlete" breaking into sobs during "Nearer My God To Thee."  The Rev. J. F. Loba of the Congregational Church spoke of Boltwood's "high personal integrity" and concentration of "all powers on teaching."  Then, in the "yellowish light of the late winter afternoon," Henry Leonidas Boltwood was buried in Rosehill Cemetery just after the five o'clock sunset.
﻿