One of the most widely read articles I have done for this blog is the article I did about Fanny Bachechi, the owner of the world-famous Fanny's Restaurant in Evanston, Illinois.  Because of the popularity of that article I decided to write about another famous Chicago area restaurant, Ignatz and Mary's Grove Inn, and its owners, Ignatz and Mary Lafnitzegger.

Ignatz Lafnitzegger was born September 15, 1904 in Buch bei, Hartberg, Styria, Austria, to Ignatz Lafnitzegger Sr (1880-????) and Juliana, nee Moik (1881-????).  I was not able to find out any information about possible siblings, except that his obituary mentioned a sister, Ann, who remained in Austria.  We do know that Ignatz came to the United States on October 27, 1922 when he was 18 years old.  He told the immigration authorities that he had been a farmhand in Austria and that his final destination was Chicago.

Ignatz wasted no time in becoming a US citizen, taking the oath on June 8, 1928.  When he became a citizen the family was living at 6239 S. May Street in Chicago:

Theresa Weber Lafnitzegger died in 1934.  Other than that, I could not find any information about her death.  She was 31 years old.  She is buried in St. Mary's Cemetery in Evergreen Park, Illinois.

By the time of the 1940 US Census, the Lafnitzegger family was living at 5018 Lake Park Avenue in Chicago, where Ignatz, Mary and Joseph had been joined by a little addition:  Margaret (b. 1938).  5018 S. Lake Park Avenue is no longer there.  Ignatz listed his occupation as "shopkeeper" in an "antique store"; Mary was a "storekeeper" in a "retail grocery".

The year 1945 brought two events that would change the lives of Ignatz and Mary forever.  The Chicago Daily Tribune from May 19, 1945 carried the following sad story:

Pvt. Joseph I. Lafnitzegger, 20, son of Mr. & Mrs. Ignatz Lafnitzegger, of 834 W. Willow st., was killed in action on Luzon (Philippines) April 23.  also surviving are a sister and a brother.  There will be a memorial Mass at 9 a.m., Thursday, May 24, in St. Theresa Church, Kenmore and Armitage avs.

Joseph Lafnitzegger is buried in the Manila American Cemetery and Memorial in the Philippines, but the family created a monument to him next to his mother in St. Mary's Cemetery, Evergreen Park, Illinois:

There are new townhouses on the site of 834 W. Willow Street today.

The other life-changing event for that  Ignatz and Mary in 1945 was that they bought the restaurant on the northwest corner of Milwaukee Avenue and Euclid (Lake) Street in Wheeling, Illinois. There had been a restaurant on that site since the 1890s owned and operated by the Schufreider family.  In those days Milwaukee Avenue (US Route 45) was the main route people took by horse and then by car from Chicago to the northernmost parts of Illinois and southeast Wisconsin. Realizing that calling the restaurant "Lafnitzegger's" would be a mouthful, they wisely named the restaurant "Ignatz and Mary's Grove Inn." 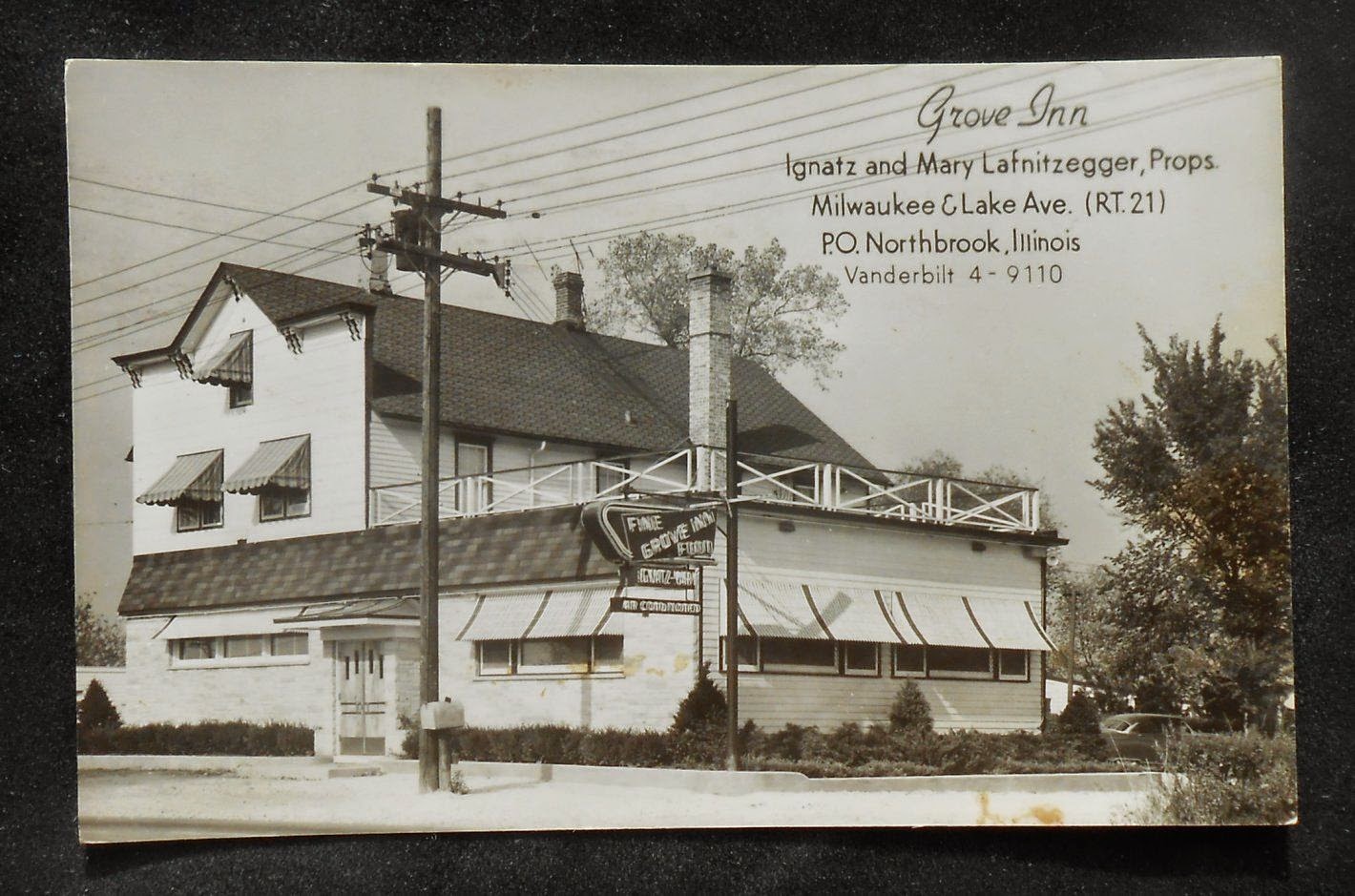 From 1945 to 1987 the Lafnitzeggers delighted countless thousands of customers with their outstanding German food and atmosphere 364 days per year (Closed on Christmas).  In 1945, a trip to Ignatz and Mary's was a drive "out in the country" but by the 1980s the restaurant was in the middle of a booming commercial area of gas stations, hotels, and strip shopping centers.

Here's a view after the 1962 addition was added: 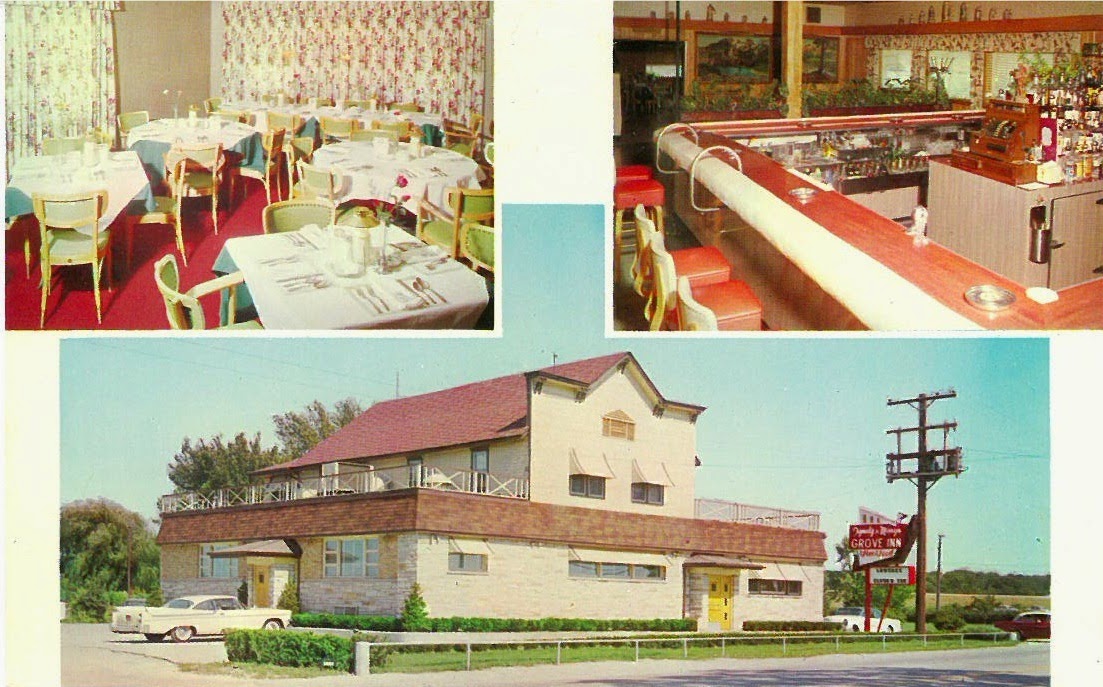 Long-time patrons of Ignatz and Mary's looked forward to the annual Schlachfest every October and the wild game dinner party each January.  Specialties of the house included sauerbraten with homemade red cabbage and roast duck.  Customers also raved about their delicious homemade pies and strudel. 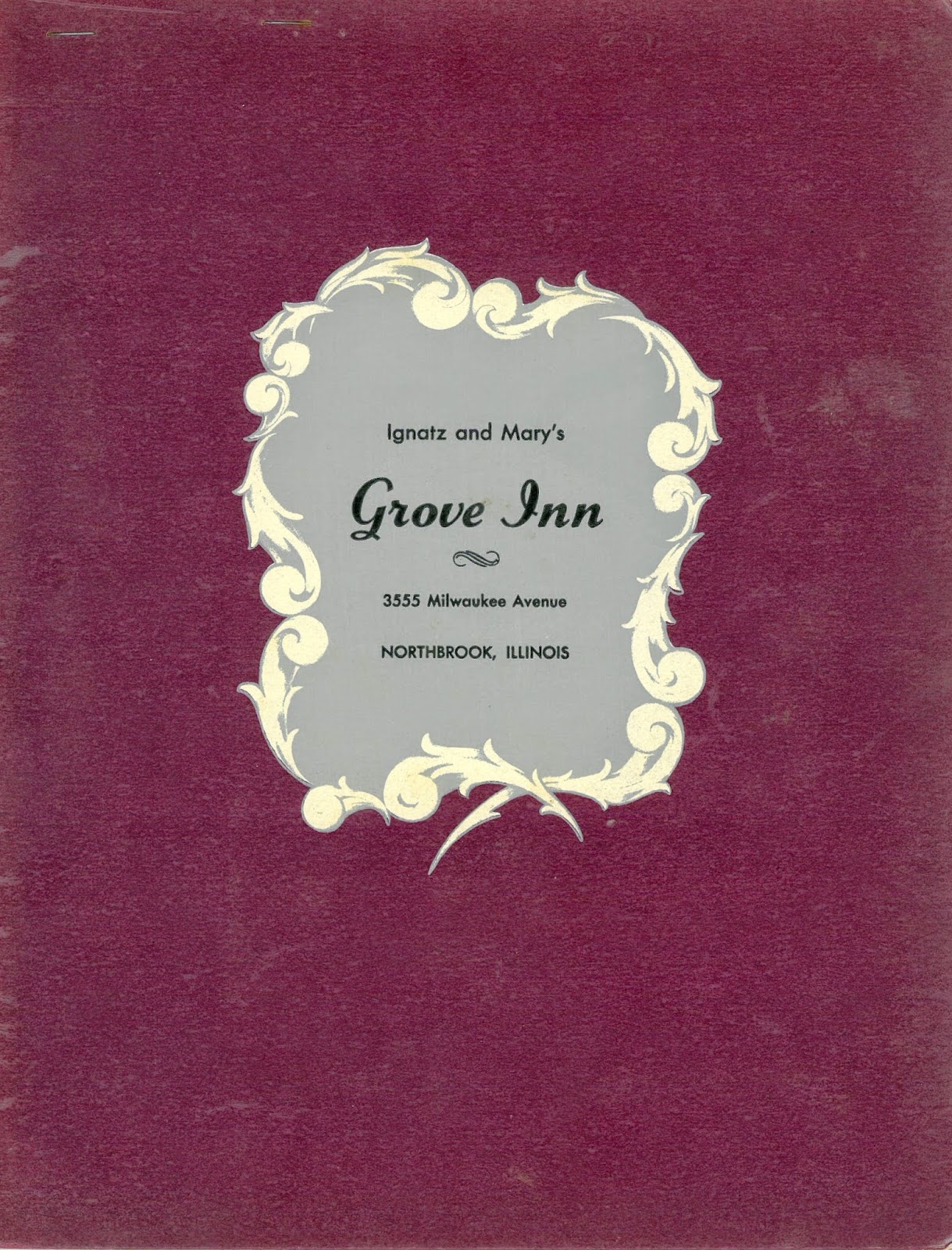 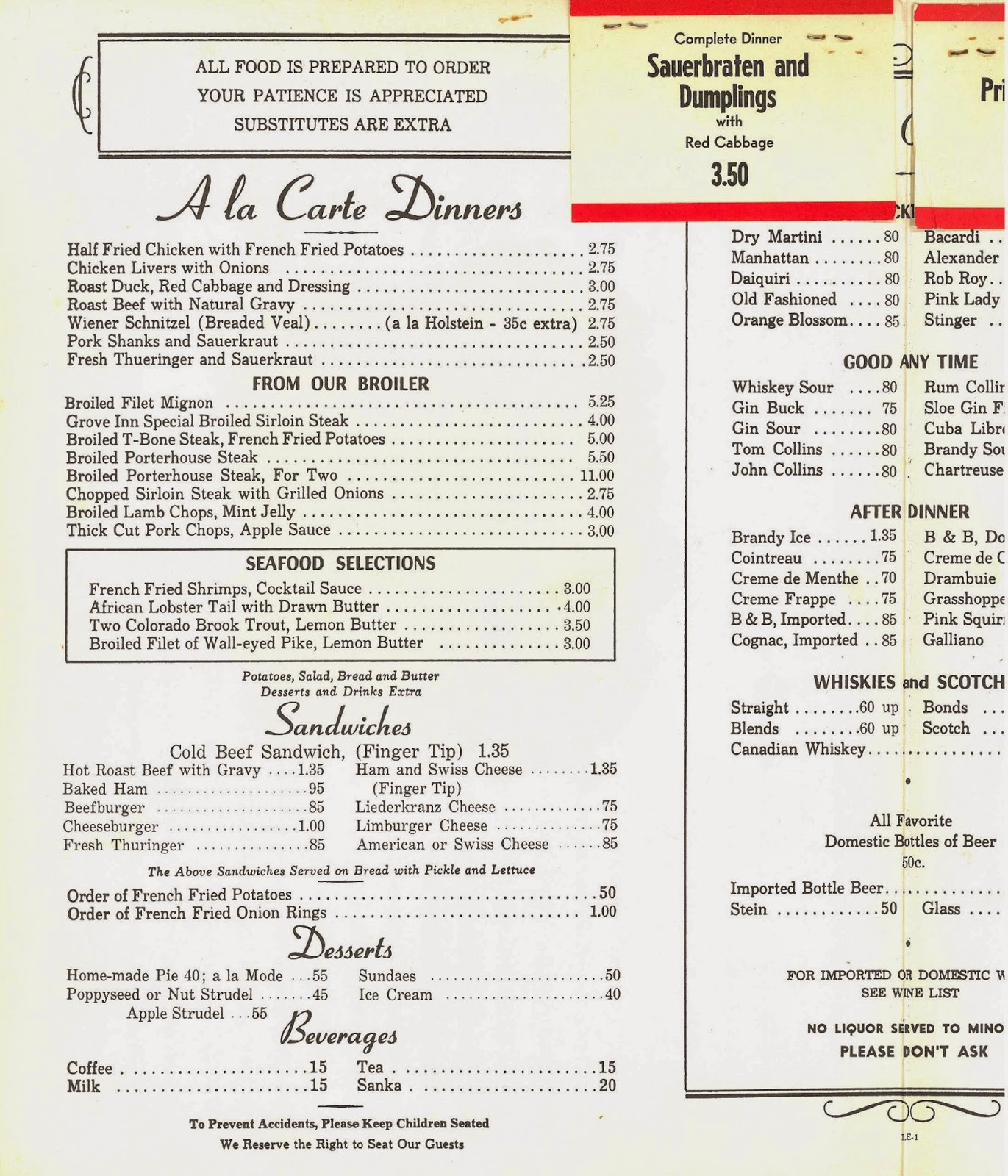 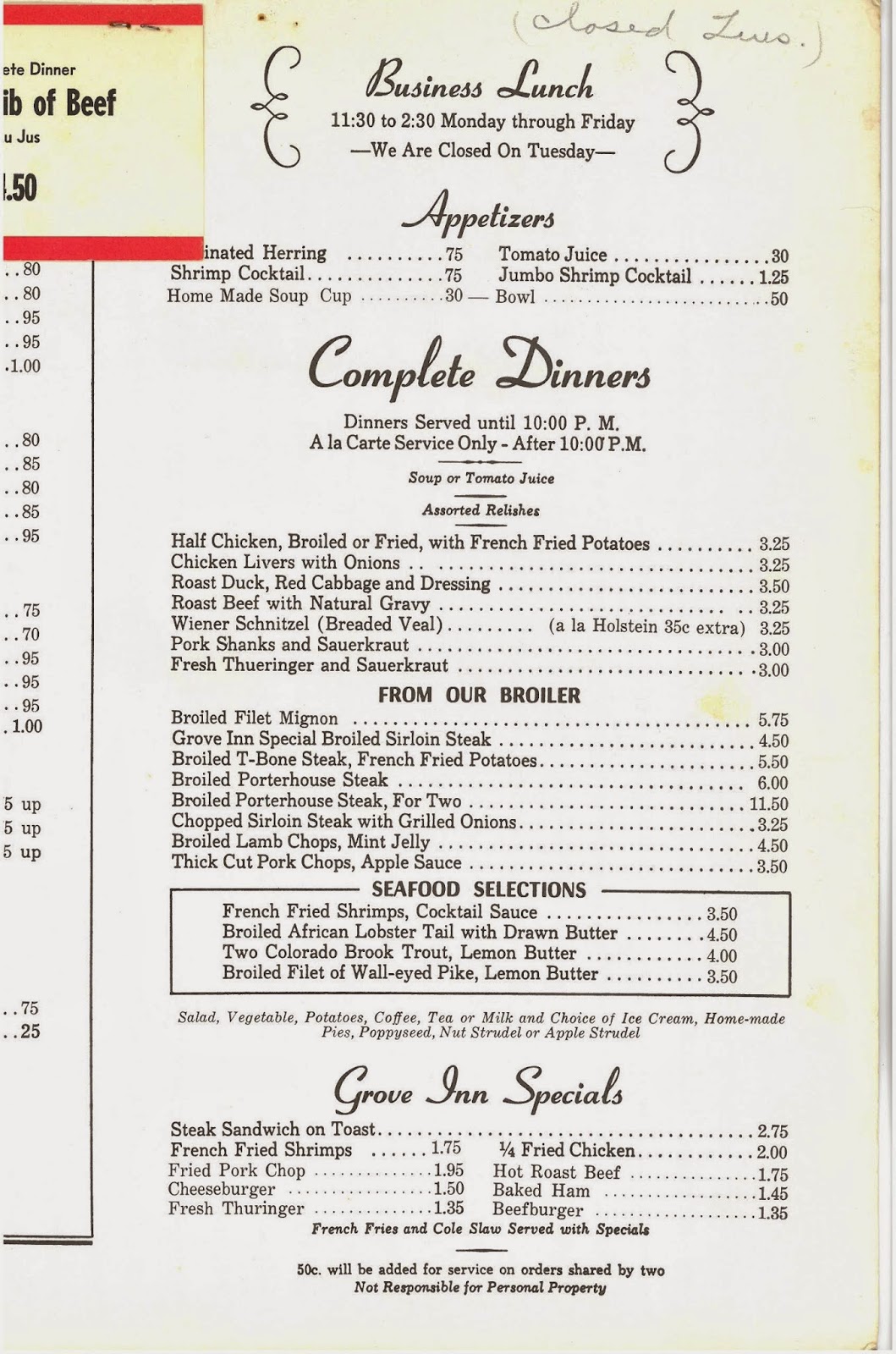 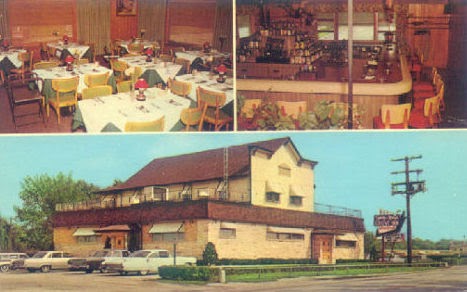 Ignatz and Mary ran the restaurant until their retirement in 1980 when their daughter Margaret and her husband Fritz Miller took over the day to day operations.  The Lafnitzeggers spent their retirement between homes in Arizona and Wisconsin.

The Chicago Tribune from September 14, 1987 brought the sad news of the death of Ignatz: 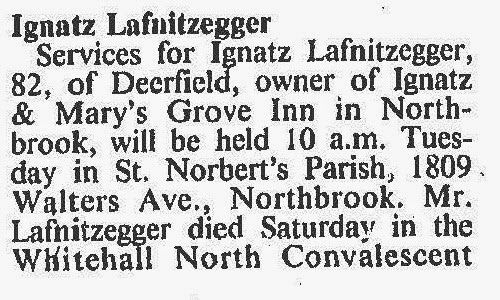 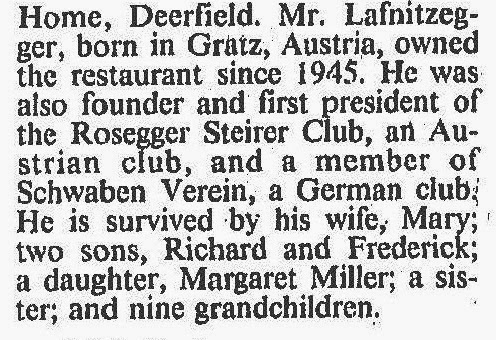 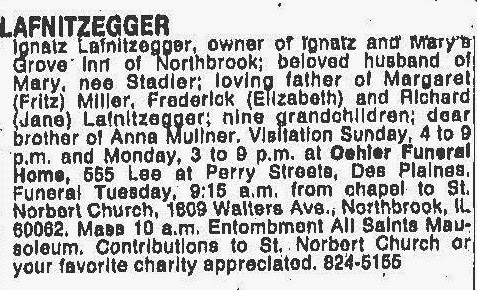 In lieu of flowers contributions to St. Norbert Church appreciated.

As mentioned in their obituaries, Ignatz and Mary Lafnitzegger are entombed in the mausoleum at All Saints Catholic Cemetery in Des Plaines, Illinois in an area dedicated to St. Francis of Assisi: 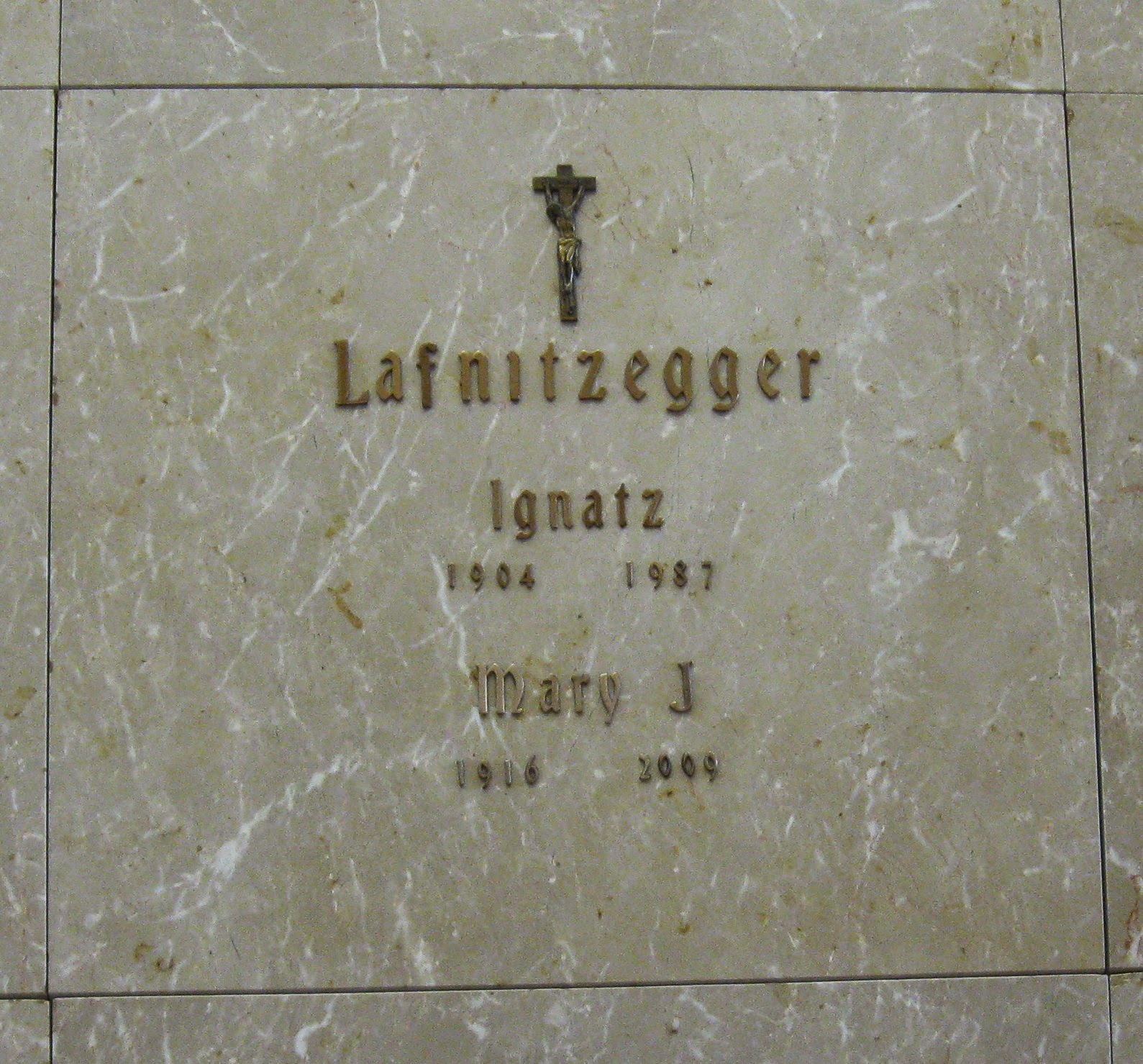 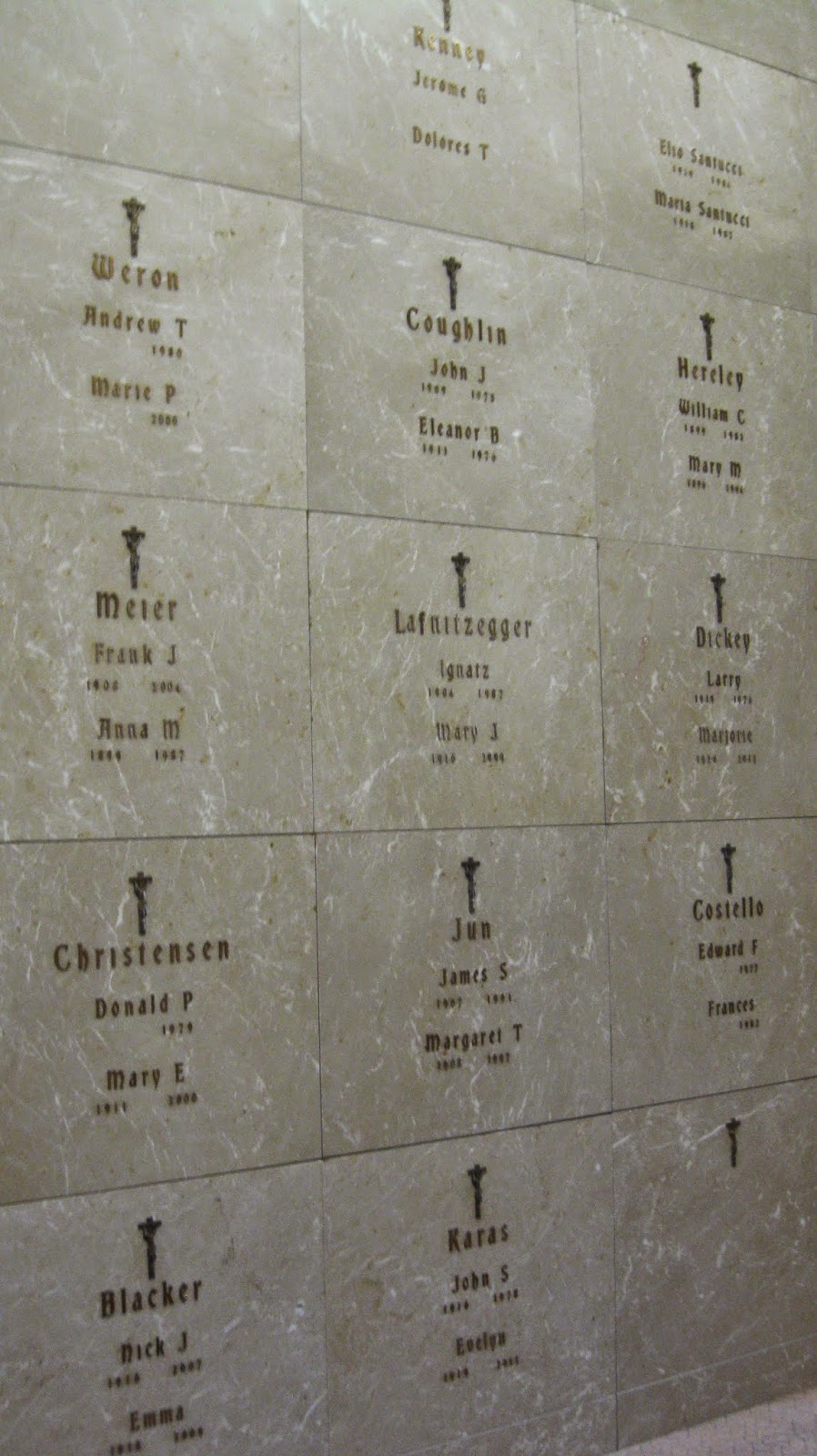 As mentioned above, after Ignatz and Mary retired, the restaurant was run by their daughter Margaret and her husband Fritz Miller until the end of 1986.

Ignatz and Mary`s was sold at the end of 1986 to the Marriott Corp. After weighing all the options, the family decided that a sale of full 5 acre parcel was the best and only economic decision for them.

Today a chain hotel sits on the site of the former Ignatz and Mary's.

Ignatz and Mary Lafnitzegger, noted restaurateurs, fondly remembered by countless thousands of satisfied customers - may they rest in peace.
Posted by Jim Craig at 3:11 AM