COOK COUNTY, ILLINOIS IS NAMED FOR HIM - Daniel Pope Cook

My mother used to complain that whenever my father or I noticed a historical plaque in our travels we immediately wanted to stop and read what was on it.  She, on the other hand, could not have been less interested in historical plaques.  I guess I inherited my love of history from my father.  I always say that I would much rather talk about what happened on this spot 100 years ago, than what happened here yesterday.

On of the most widely read posts from this blog was the one I did on William Grant Edens, for whom the Edens Expressway was named.  That got me to thinking about other nearby places and who they might be named after.  We know that Illinois is named after the Illini Indians who used to live here, but what about Cook County?  It must be named for some well-known politician.  He was a politician, and was fairly well-known in his era but is all but forgotten today.  Cook County, Illinois is named for Daniel Pope Cook (1794-1827), who was a newspaper owner, lawyer, Illinois attorney general and member of the US House of Representatives - and all before he died at the age of 33!

Daniel Cook moved to Kaskaskia, Illinois in 1815 and took a job as a store clerk, but soon began to read law under the supervision of his uncle, Nathaniel Pope.  Territorial governor Ninian Edwards appointed young Cook the territorial Auditor of Public Accounts in 1816, so he moved to Edwards, Illinois where he purchased the Illinois Herald newspaper and renamed it the Western Intelligencer.

Cook's uncle, Nathaniel Pope, became a delegate to the U.S. Congress from the Illinois Territory, so upon the election of James Monroe as president, Cook moved to Washington, D.C. to establish his career in the nation's capitol. In 1817 Cook traveled to London to deliver dispatches and bring back John Quincy Adams, the country's representative to Great Britain, whom President Monroe appointed to serve as Secretary of State. Cook and Adams became closely acquainted during the long voyage back to the U.S.

Shortly after Cook returned from England, tired of service as a mere dispatch-bearer, Cook moved back to Illinois, where he became an ardent supporter of statehood. Cook used his newspaper and new appointment as clerk to the Territorial House to influence the Legislature, which unanimously passed a resolution urging statehood (and forbidding slavery) on December 10, 1817. Cook also lobbied his friends back in Washington and Virginia, and his uncle conveyed the territorial resolution to the U.S. Congress on January 16, 1818. After both the U.S. Senate and House agreed, President Monroe on April 18, 1818 signed the law authorizing Illinois to hold a convention to adopt a state constitution and elect officers. On December 3, 1818, President Monroe than signed the law admitting Illinois as the 21st state.

Despite his successful advocacy of statehood, Daniel Cook was unsuccessful in his first attempt to be elected to the U.S. House of Representatives, losing to John McLean by only 14 votes for the short term remaining after Illinois became a state. However, the new state's legislature appointed Cook as the first Attorney General of Illinois. Cook also had briefly served the territory as judge of the western circuit.

Again running for Congress in 1818, Pope defeated McLean in the general election, and again in 1820 (after a debate over slavery), 1822 and 1824, thus serving as the second representative from Illinois (although the first to serve a full term).

While he was in Congress, Daniel Cook served on the Committee on Public Lands and later on the Ways and Means Committee. He secured a grant of government lands to aid in the construction of the Illinois and Michigan Canal. In the 1824 election, Cook also helped defeat a proposed convention to legalize slavery in Illinois, and at year's end helped elect John Quincy Adams as President (by one vote when the election was thrown to the House).

Daniel and Julia Cook's one child, John Pope Cook was born in Belleville, Illinois on June 12, 1825.  He went on to become a famous Union general during the Civil War and ultimately to serve in the Illinois General Assembly.

In the election of 1826, Daniel Cook  was in poor health, so he did not do much campaigning.  Cook again scored more votes than McLean, but the pro-slavery Jacksonian Democrat, Joseph Duncan, won the election.

In the spring of 1827, President Adams sent Daniel Cook on a diplomatic mission to Havana, Cuba, but that did not restore his health.  Upon his return home, Cook asked to be taken back to his birthplace in Kentucky, where he died October 16, 1827.  He was 33 years old.

Daniel Cook was first buried in Kentucky, then reburied with the Lamb family (relatives of his son's wife) in 1866 in Oak Ridge Cemetery in Springfield, Illinois, where he rests today, under a monument where his name had become illegible as a result of time and the elements. 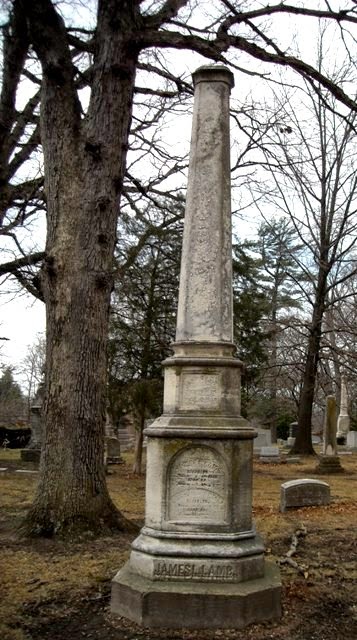 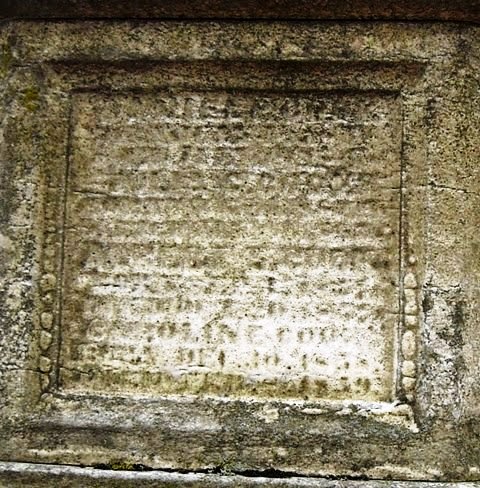 Daniel Pope Cook - tireless advocate for the people of Illinois - may he rest in peace.
Posted by Jim Craig at 2:51 AM