Unit One was the first section of the Rosehill mausoleum to be built.  It was completed in April of 1916.  If you were to enter through the main entrance doors, after you passed a section of private family rooms, you would find a white stone staircase on your right.  This staircase leads to the upper level of Unit One.  It is a large open room lined with private family rooms except for the east wall, which is made up of niches for cremated remains.  There are niches with white marble faces along each side, and the middle is comprised of forty two niches with glass fronts: 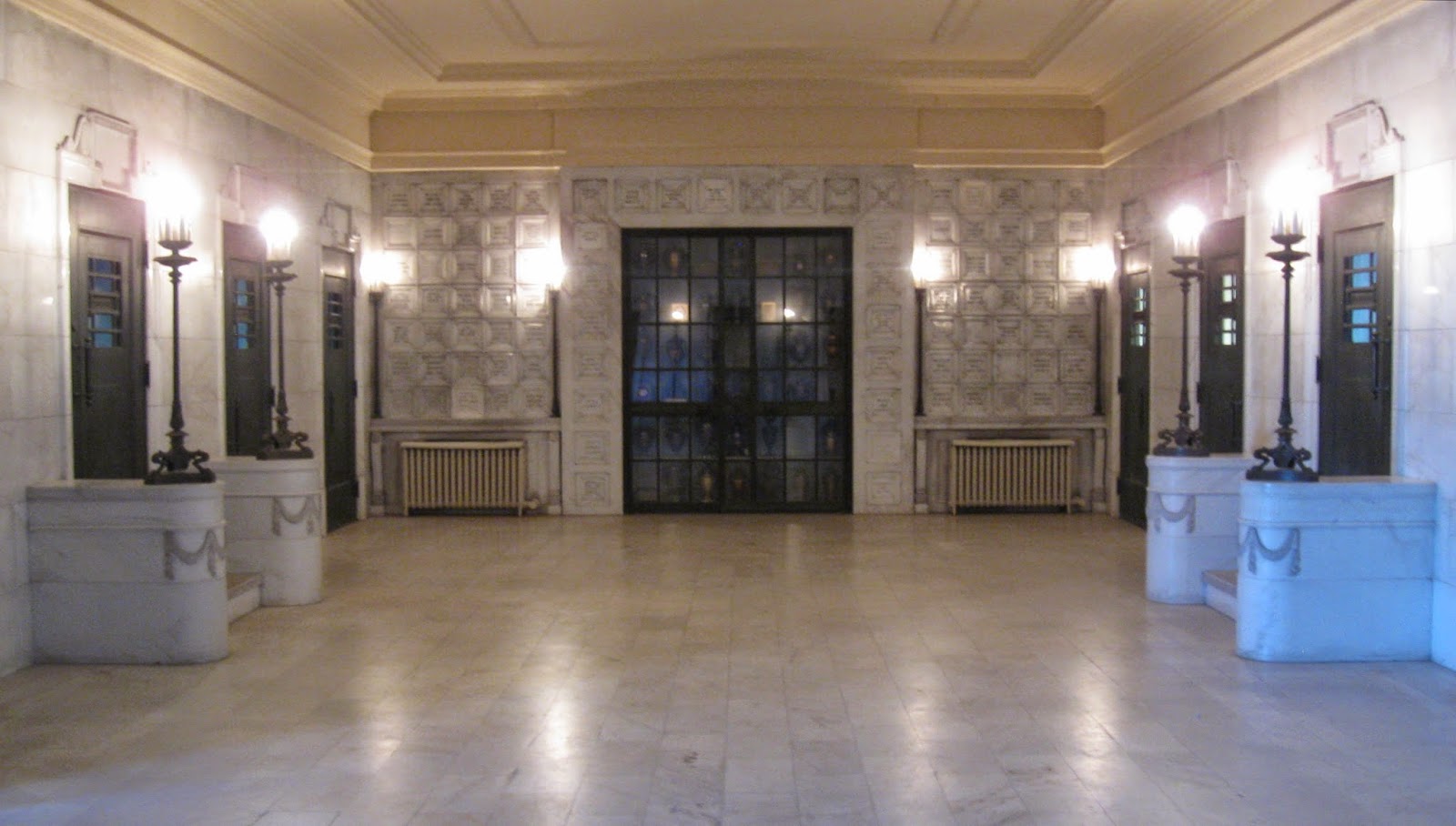 If you were to look to the left as you face the wall of niches, you would encounter the final resting place for three members of the Liljencrantz family:  Gustave, Ottilie, and Adaline.

Young Gustave first attended the New Collegiate School, and after that the Royal Technological Institute, both of Stockholm.  He graduated as a civil engineer in June, 1866.  Later on he became a gentleman of the chambers at the Swedish Royal Court.  Men who held this position were in the business of asking for favours on behalf of clients, and passing messages to the monarch or lord heading the court.  These "gentlemen" comprised a mixture of nobles hoping to rise in their career, and those—often of humble origin—whose specialized abilities the monarch wanted to use or reward.

Gustave Liljencrantz was assistant engineer at the construction of the Dalsland Canal in Sweden from 1866-1869.  The Dalsland Canal, still in use today, is said to be one of the world's most beautiful.  In 1869 Gustave left Sweden, settling in Milwaukee, Wisconsin.  In Milwaukee he took a position as a draftsman in the U.S. Engineer Office until 1870 when he joined the Chicago, Minneapolis & St. Paul Railroad, also as a draftsman.

In 1871 he moved again - this time to Chicago where he returned to the US Engineer Office, quickly rising through the ranks as his talents became apparent.

On January 19, 1876 they were blessed with a daughter who they named Ottilie Adaline Liljencrantz (1876-1910), the subject of next week's article.

Gustave listed his occupation as "US Surveyor."  Adaline's mother Harriet Hall was also living with the Liljencrantz family.  She listed her occupation as "Help of Home."

Being an engineer, Gustave also liked to tinker with gadgets in his spare time.  On September 18, 1883 he received his first US Patent #285048, for a "Fruit Jar Opener:" 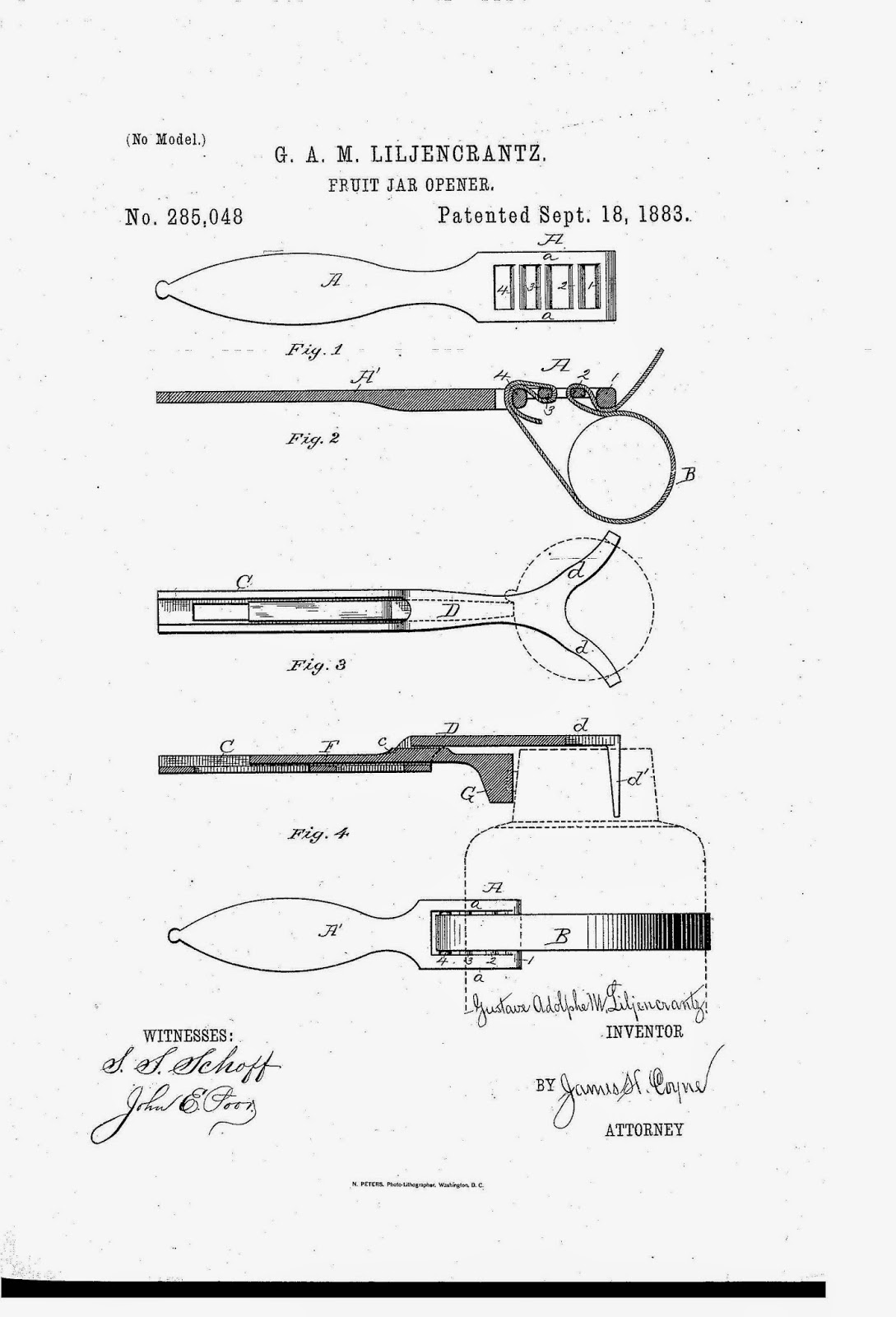 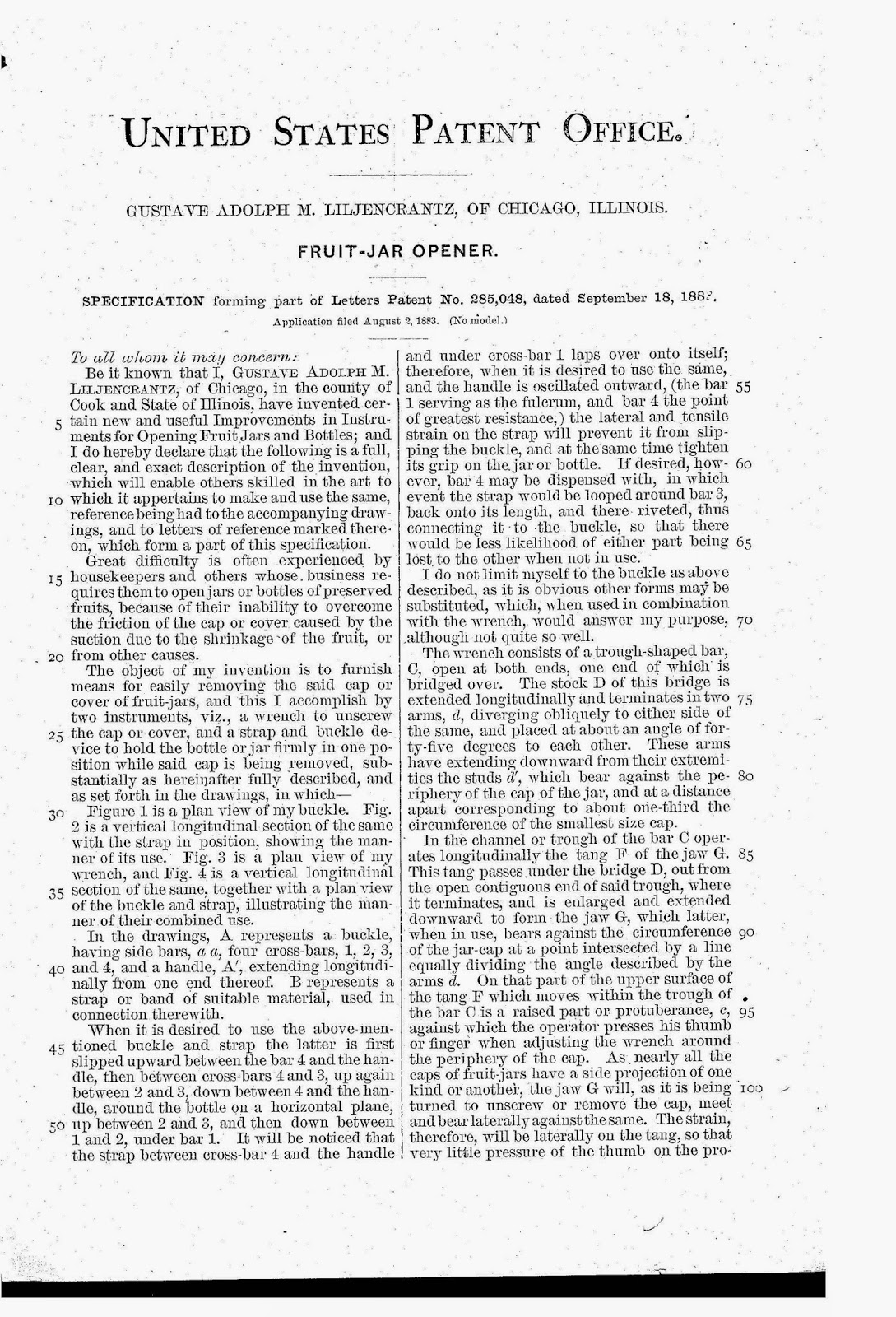 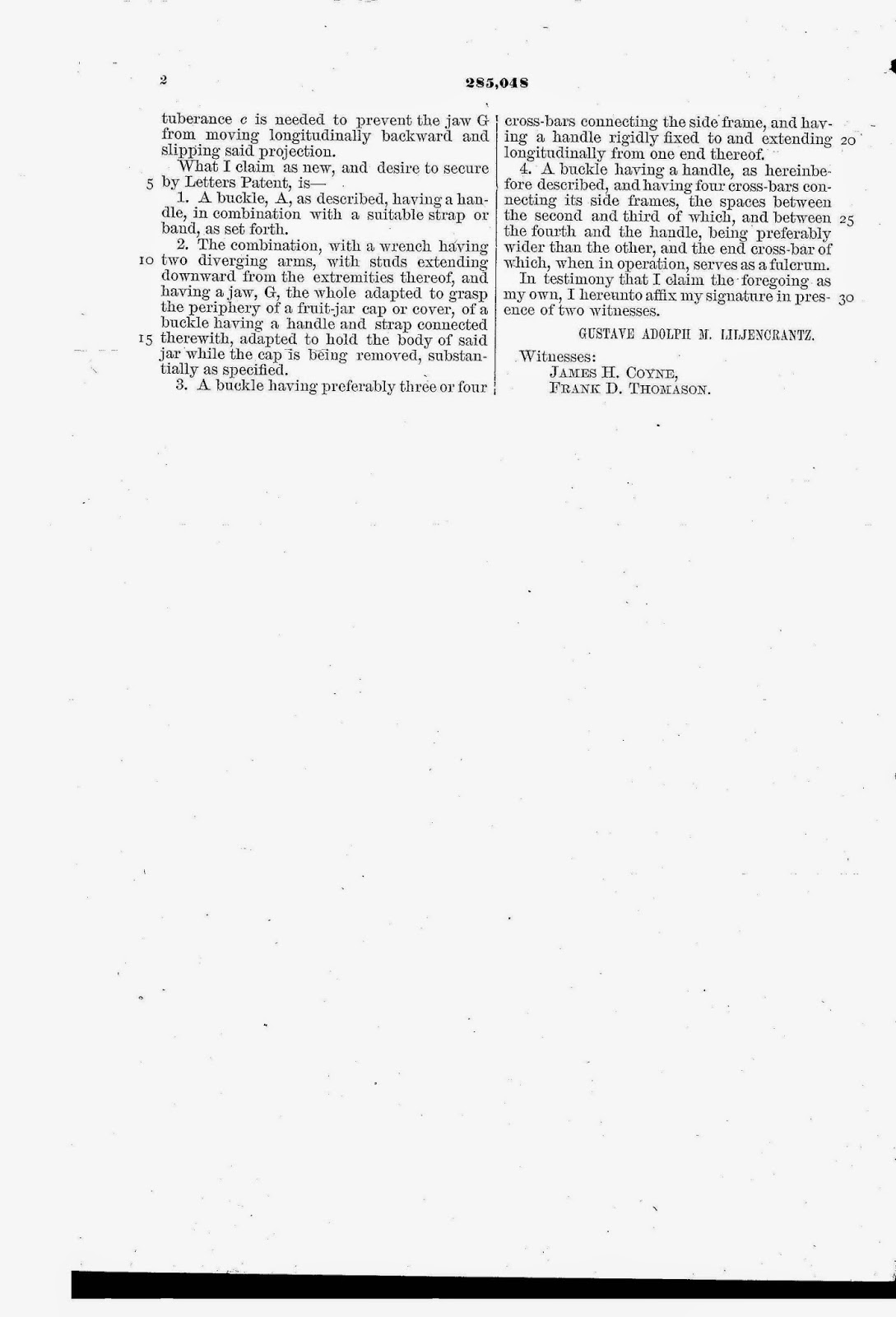 Not being satisfied with that, he received another US Patent #286836 on October 16, 1883 for a different fruit jar opener: 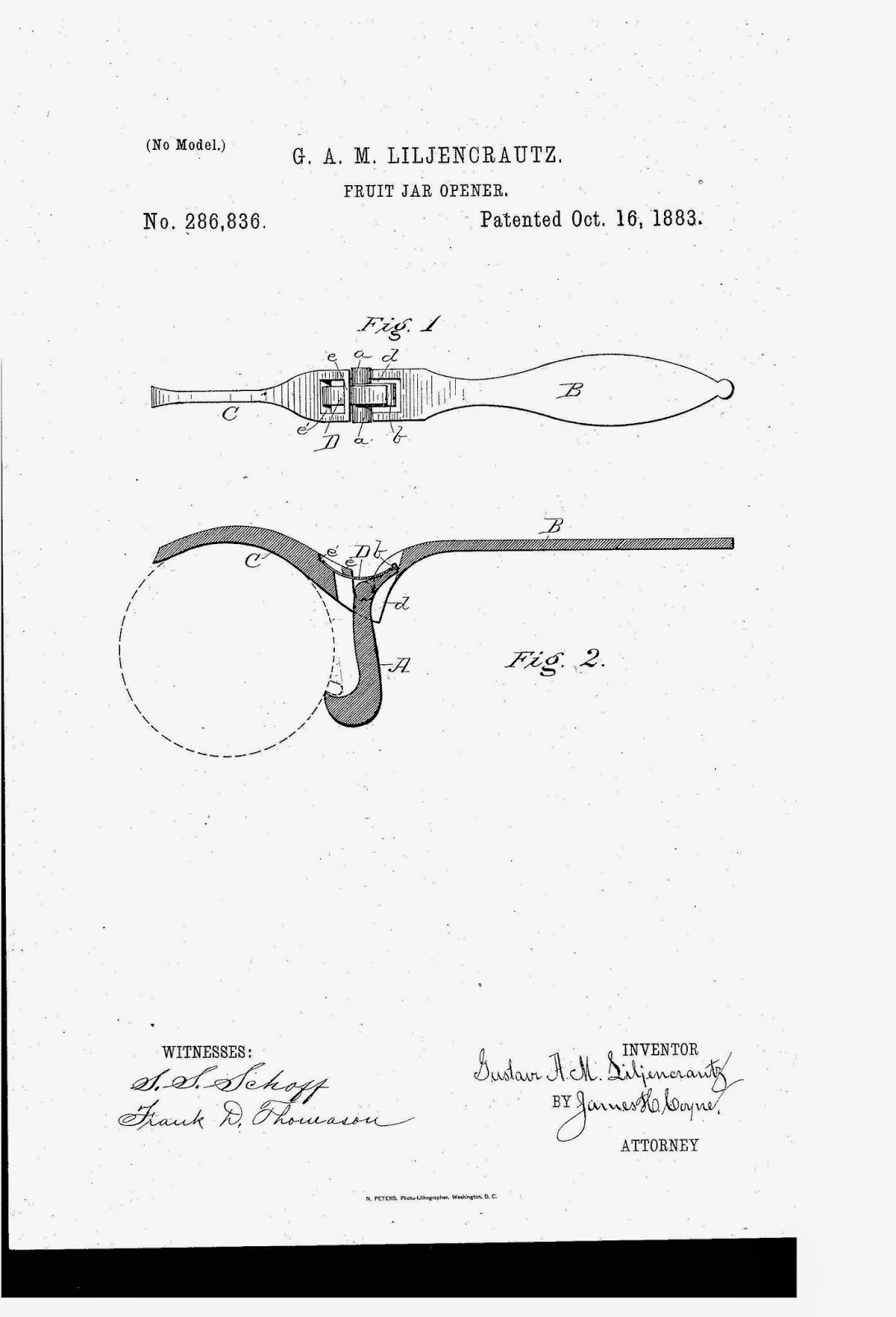 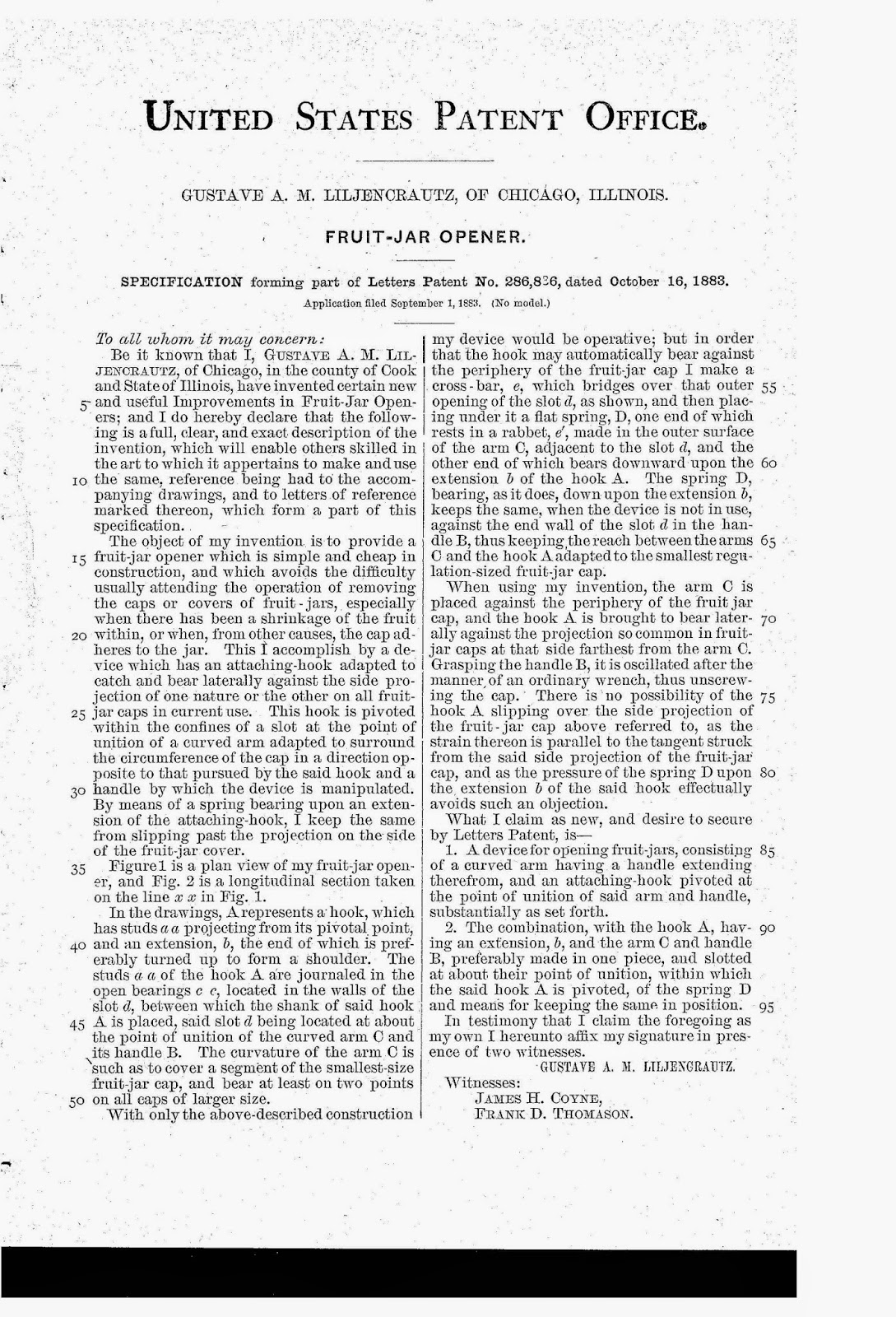 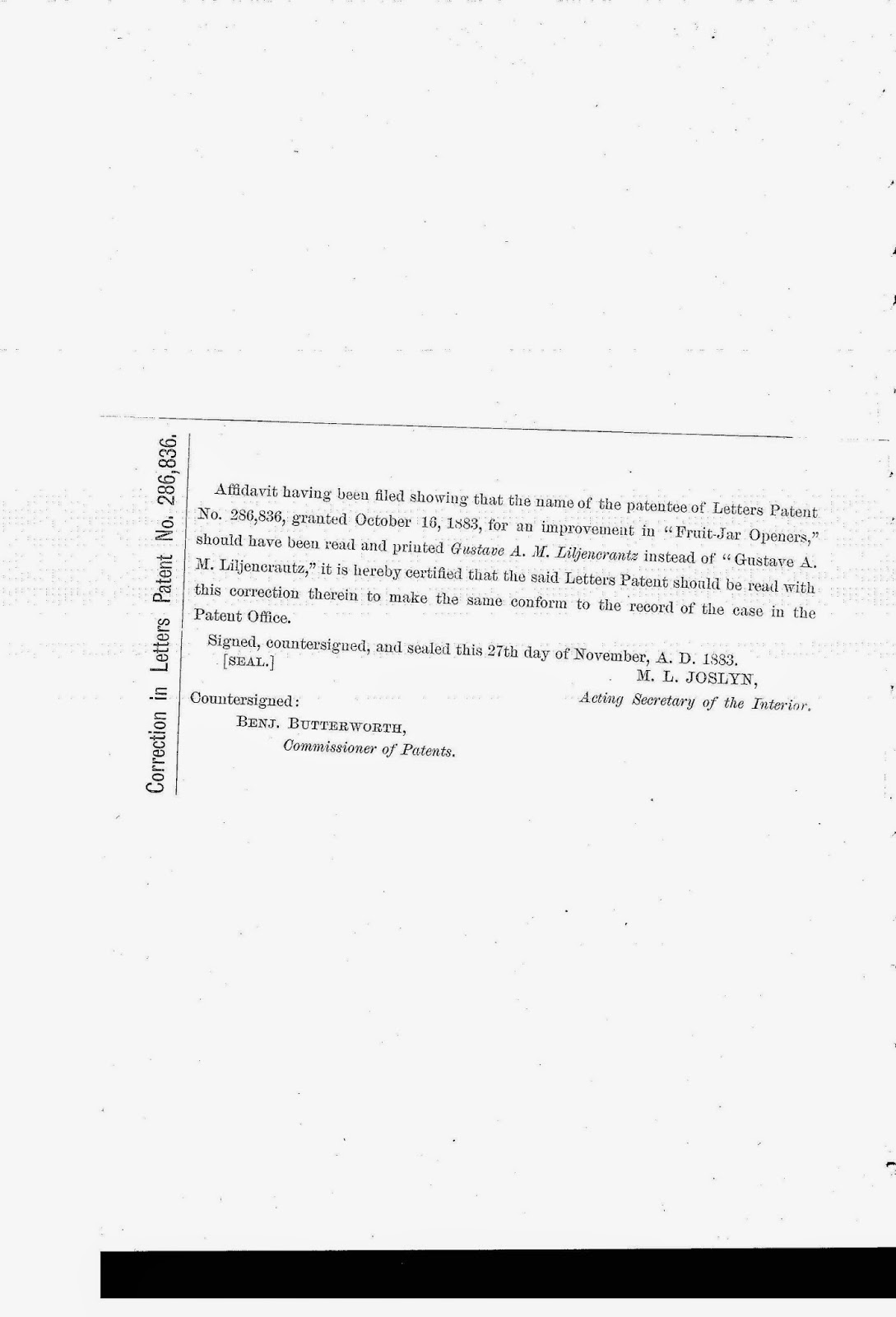 As a US Engineer, Gustave Liljencrantz spent a good portion of his time creating maps for the government.  Here's one he produced in 1880 of the Chicago Harbor: 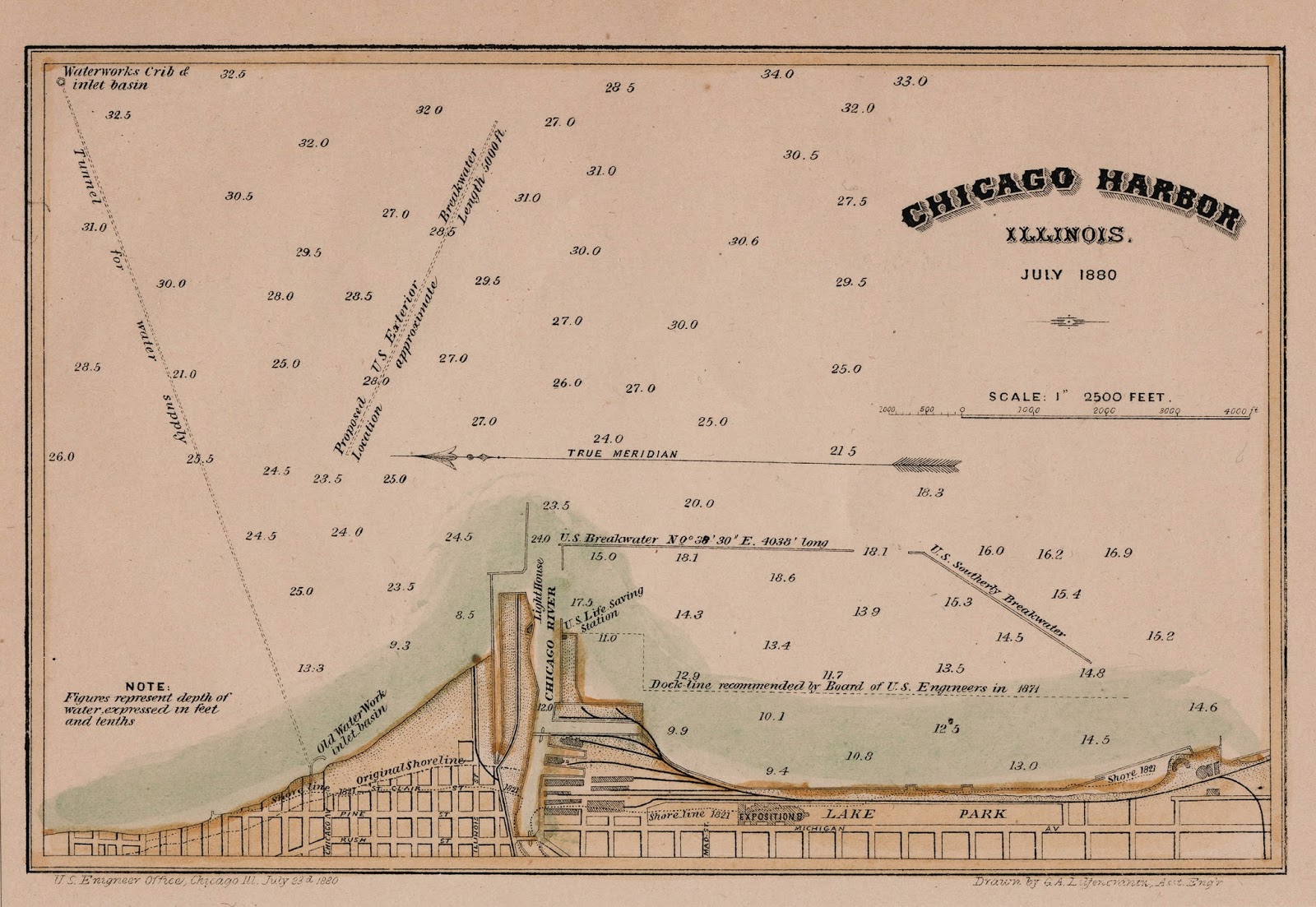 Gustave Liljencrantz was listed in the 1889 edition of the US Register of Civil, Military and Naval Service as an Assistant Engineer at an annual salary of $175.00. 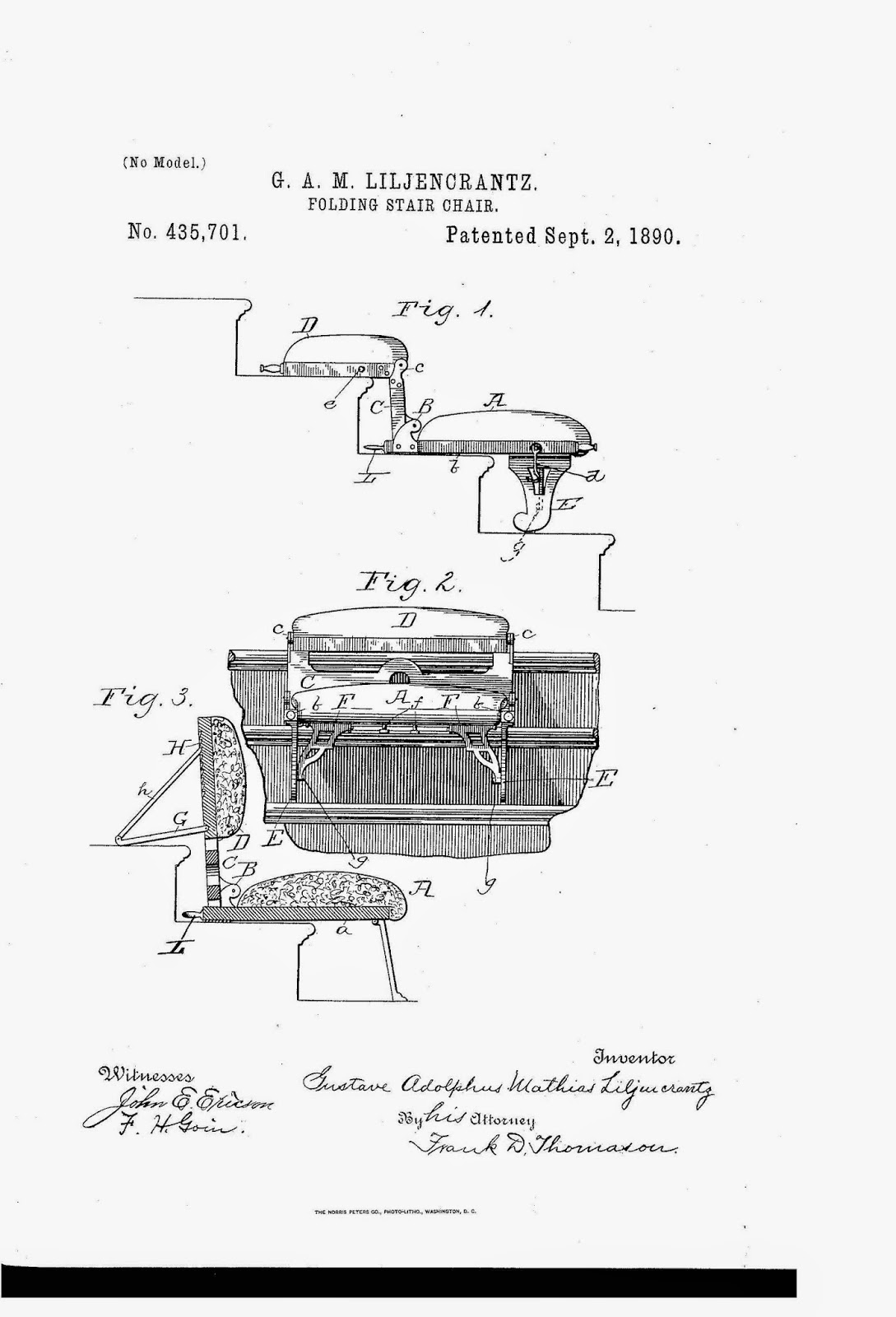 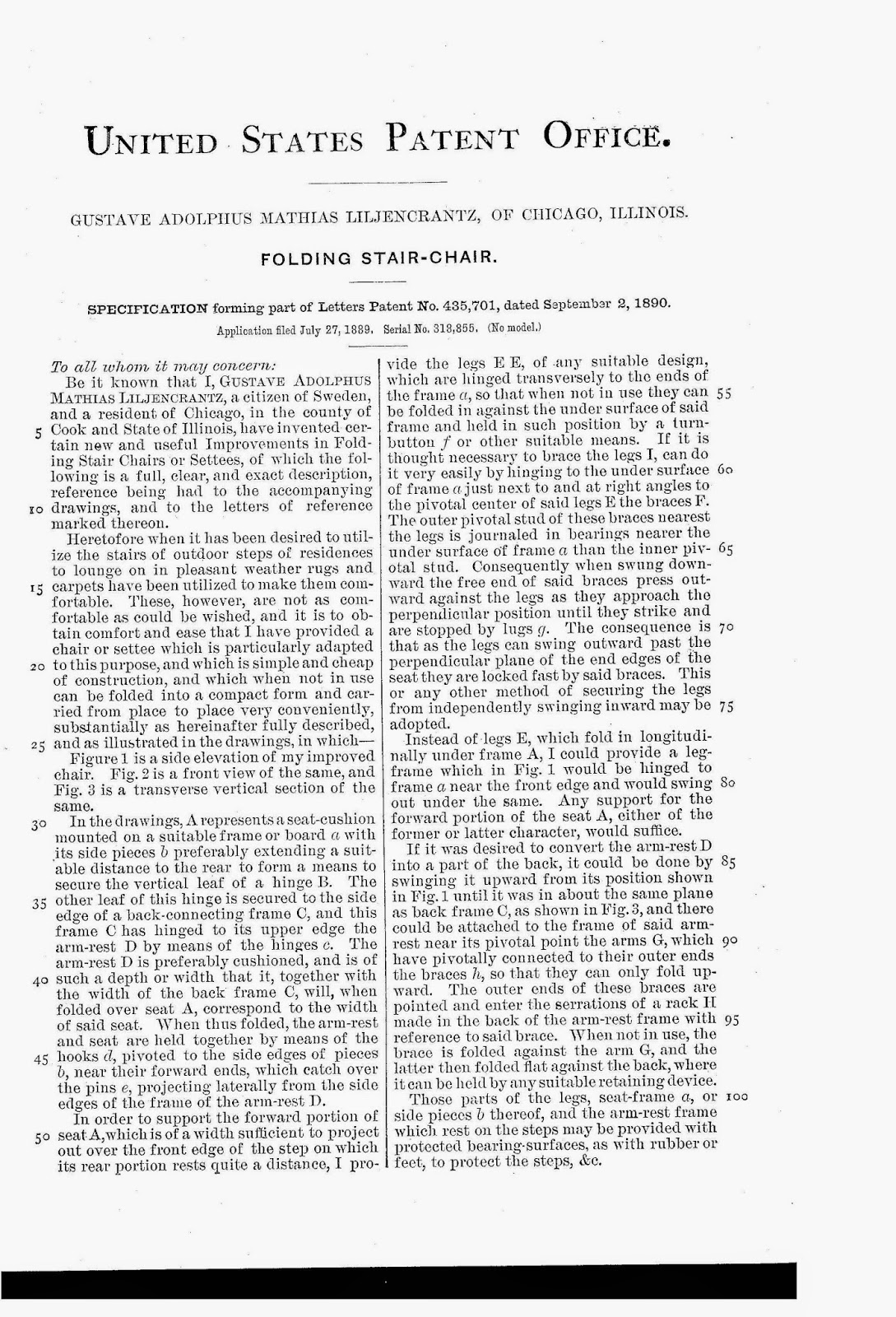 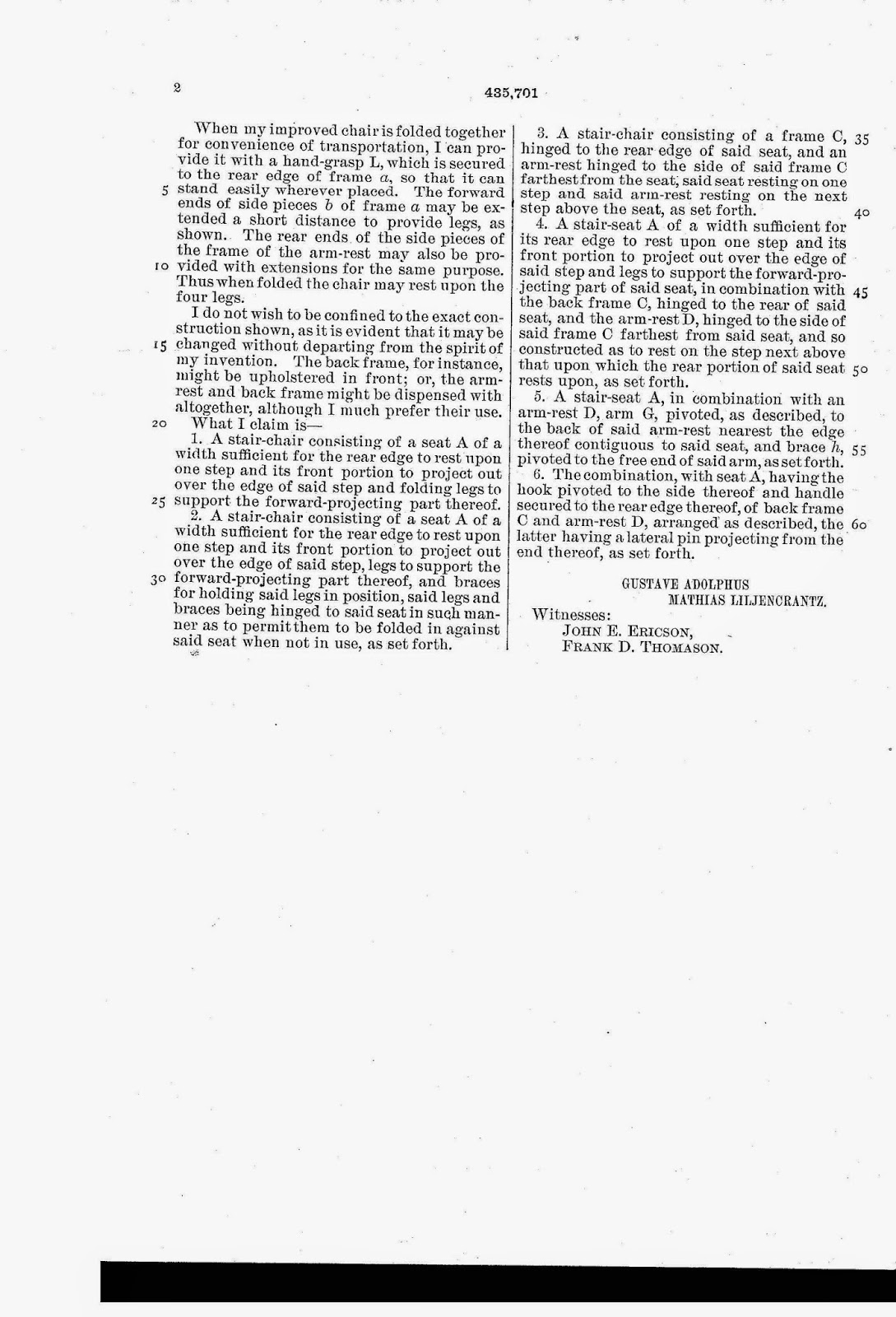 The 1890 US Census for Chicago is lost, but the City Directory of the time shows the Liljencrantz family living at 3808 Johnson Court (now 3808 S. Vincennes, Chicago).  The site was formerly occupied by part of the Ida B. Wells Homes; now it is a vacant lot.

On May 18, 1896, Gustave Liljencrantz became a naturalized US citizen.

The 1900 US Census shows the family living in the same place, although it is now referred to as 3808 Elmwood Place.  Fifty-seven year old Gustav lists his occupation as "Assistant US Engineer."  Living with him are fifty-five year old Adaline,  twenty-two year old Ottilie, and Adaline's mother, eighty-two year old Harriet Hall.

Changes are apparent in the 1910 US Census.  First of all, the family has moved.  Their new address is 627 E. Groveland Park in Chicago:

The nurse must have been there to take care of Ottilie, because she passed away on October 7, 1910 after complications from an operation.  As mentioned above, Ottilie Liljencrantz was a renowned author, and her story will be told in this blog next week.

On June 5, 1912 Gustave Liljencrantz published a book of his own:  Rapid Cost Estimation for Piers and Breakwaters.  While not as popular as his daughter's books, his book did receive rave reviews in the engineering community.

Being past the usual retirement age of sixty-five, Gustave did not give up his love of tinkering.  On March 10, 1914 he received US Patent #1089713 for a toy gun that he designed: 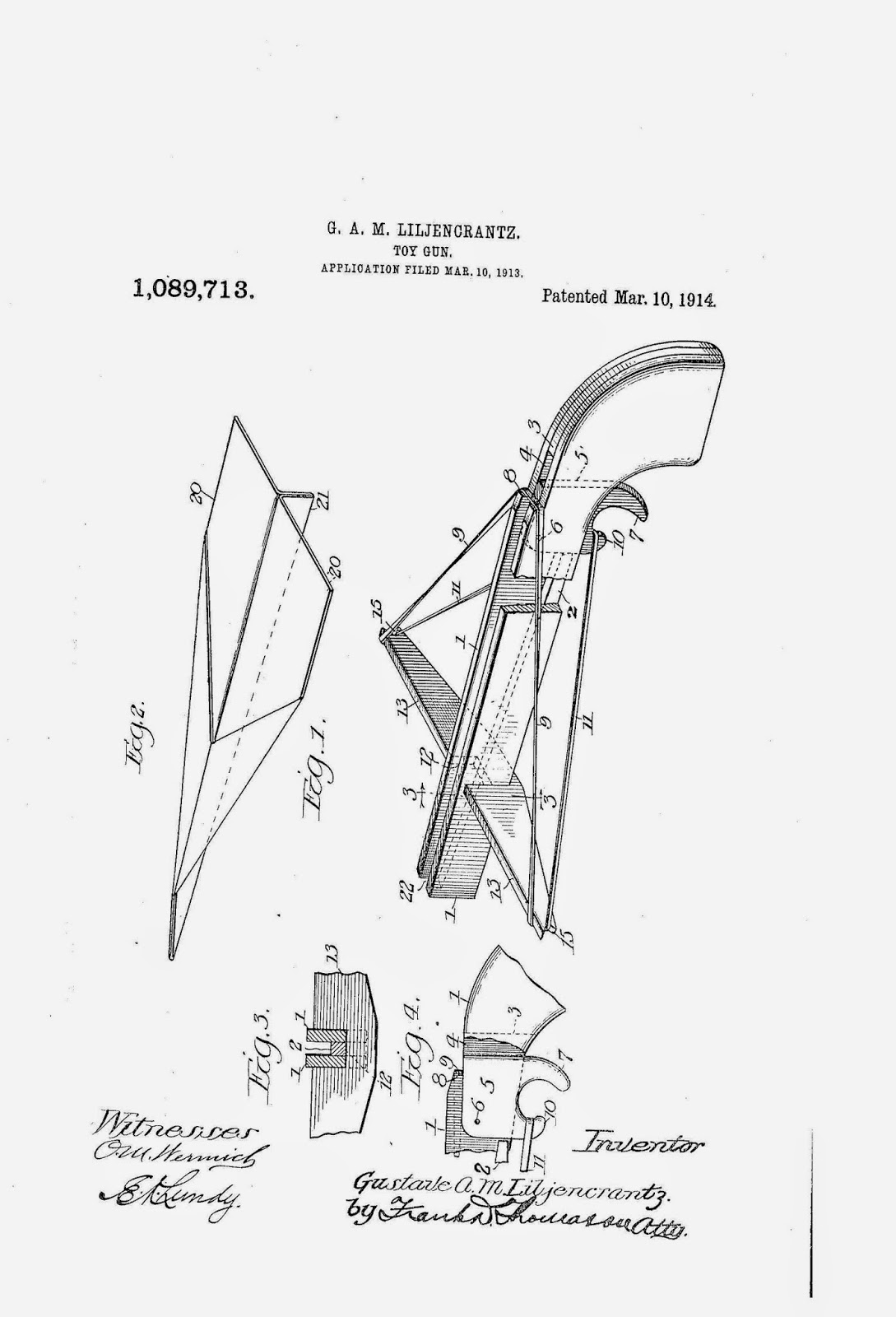 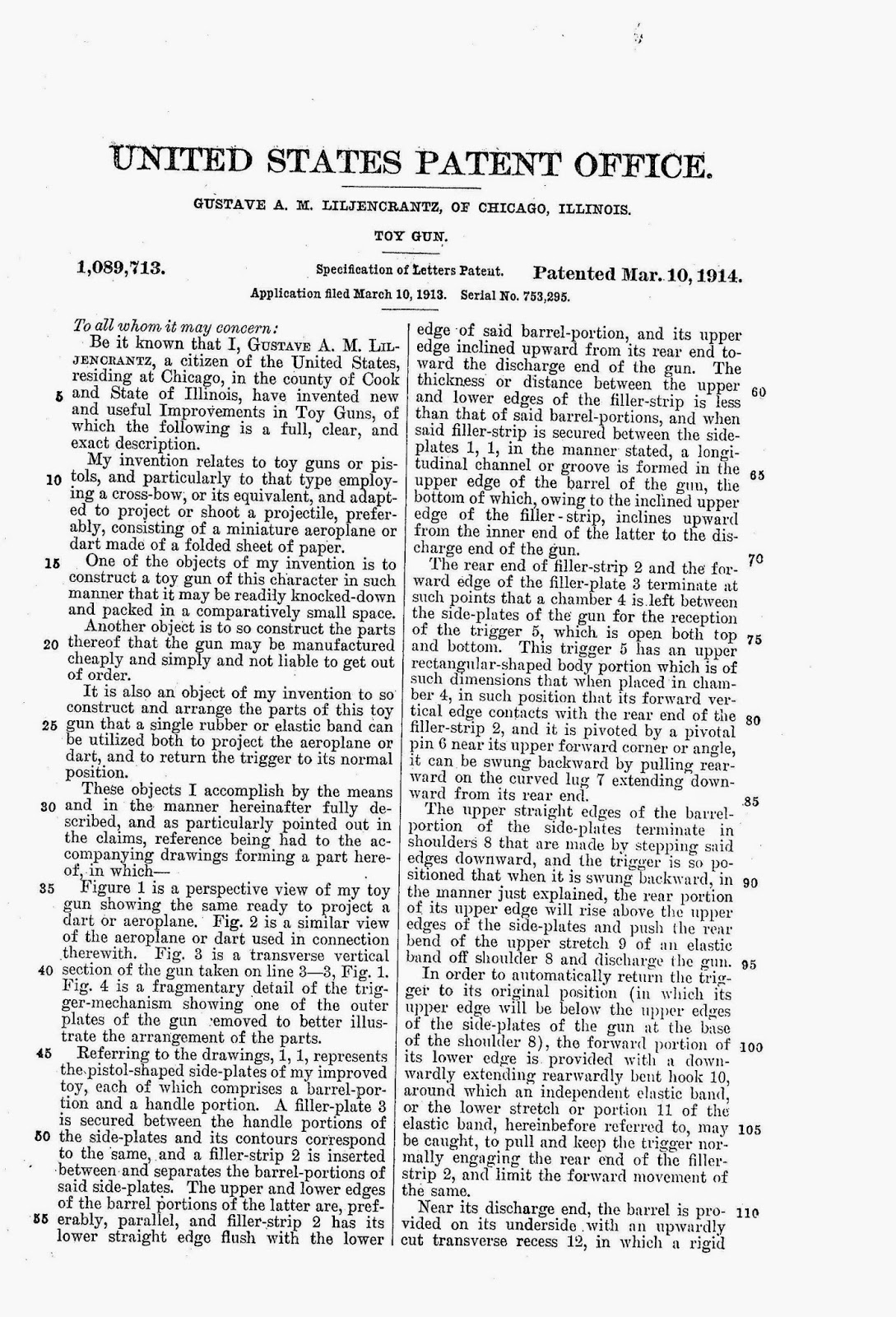 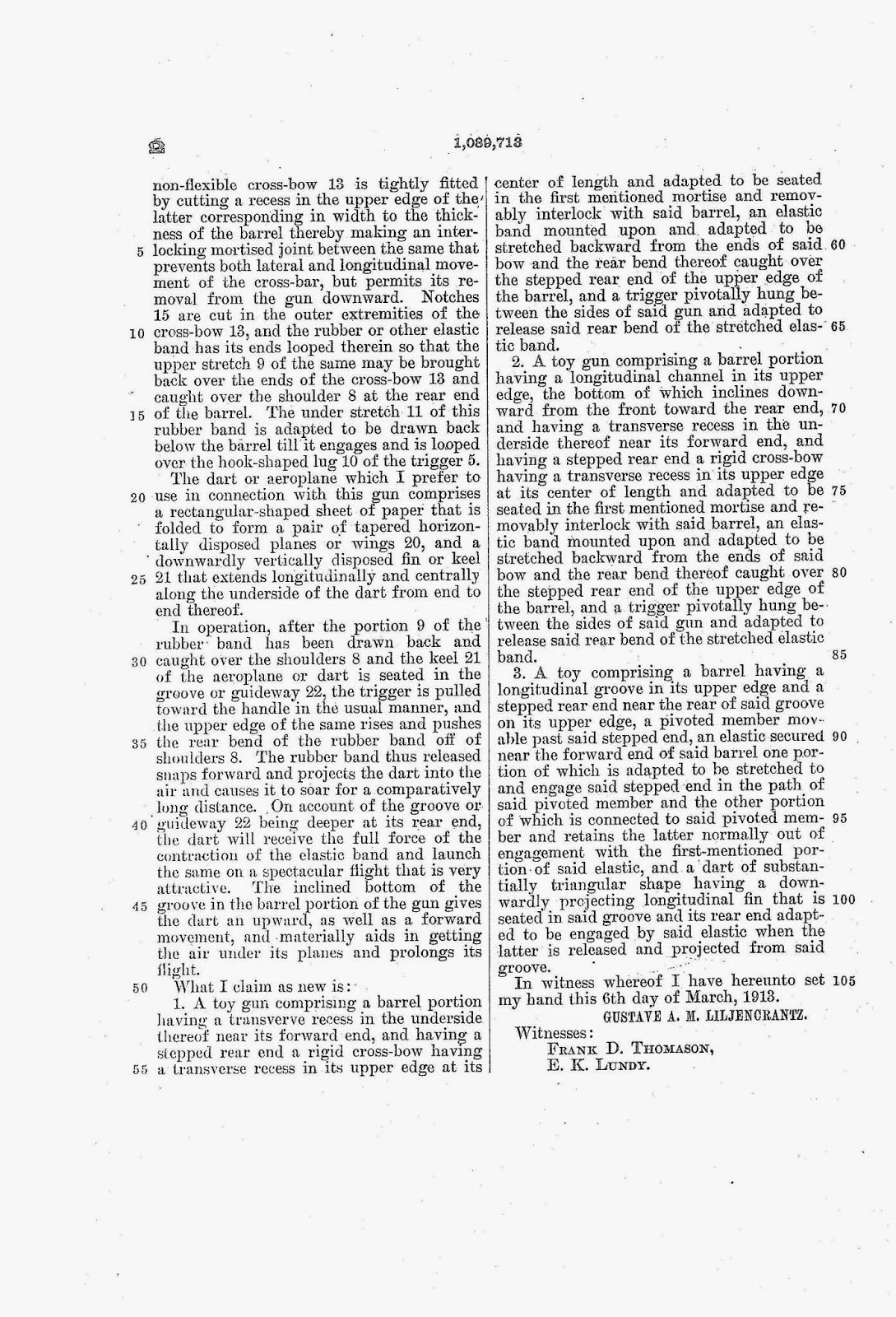 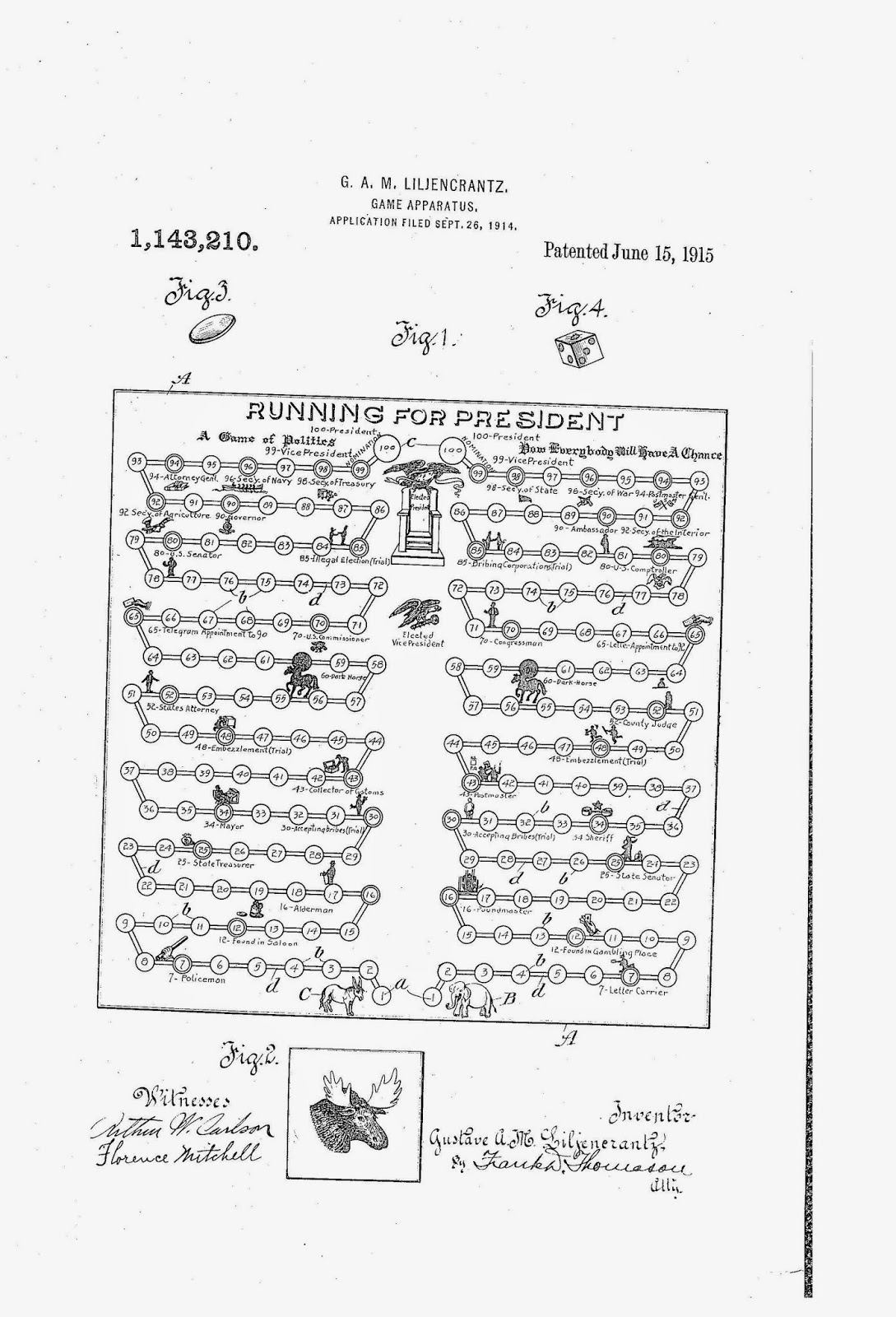 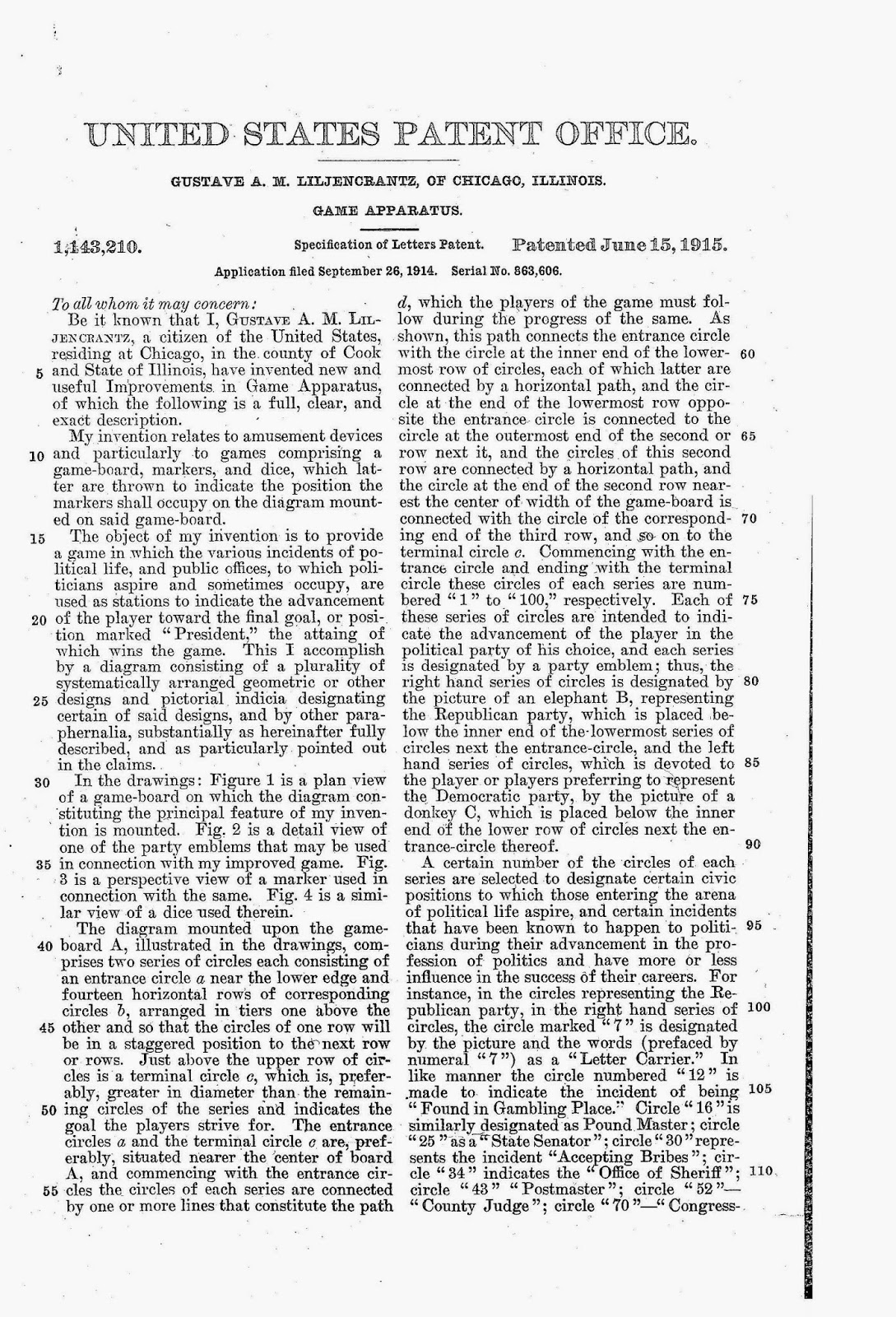 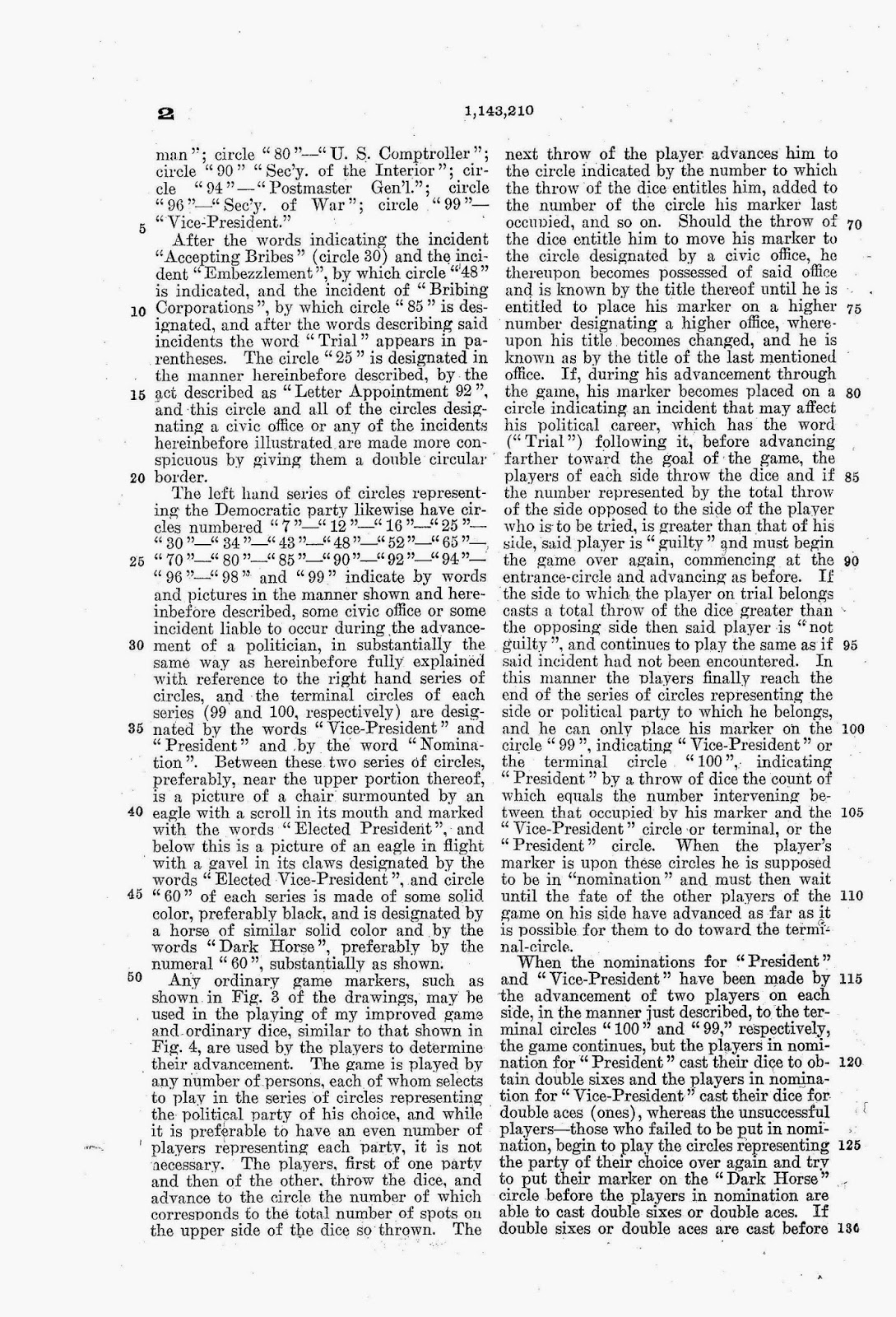 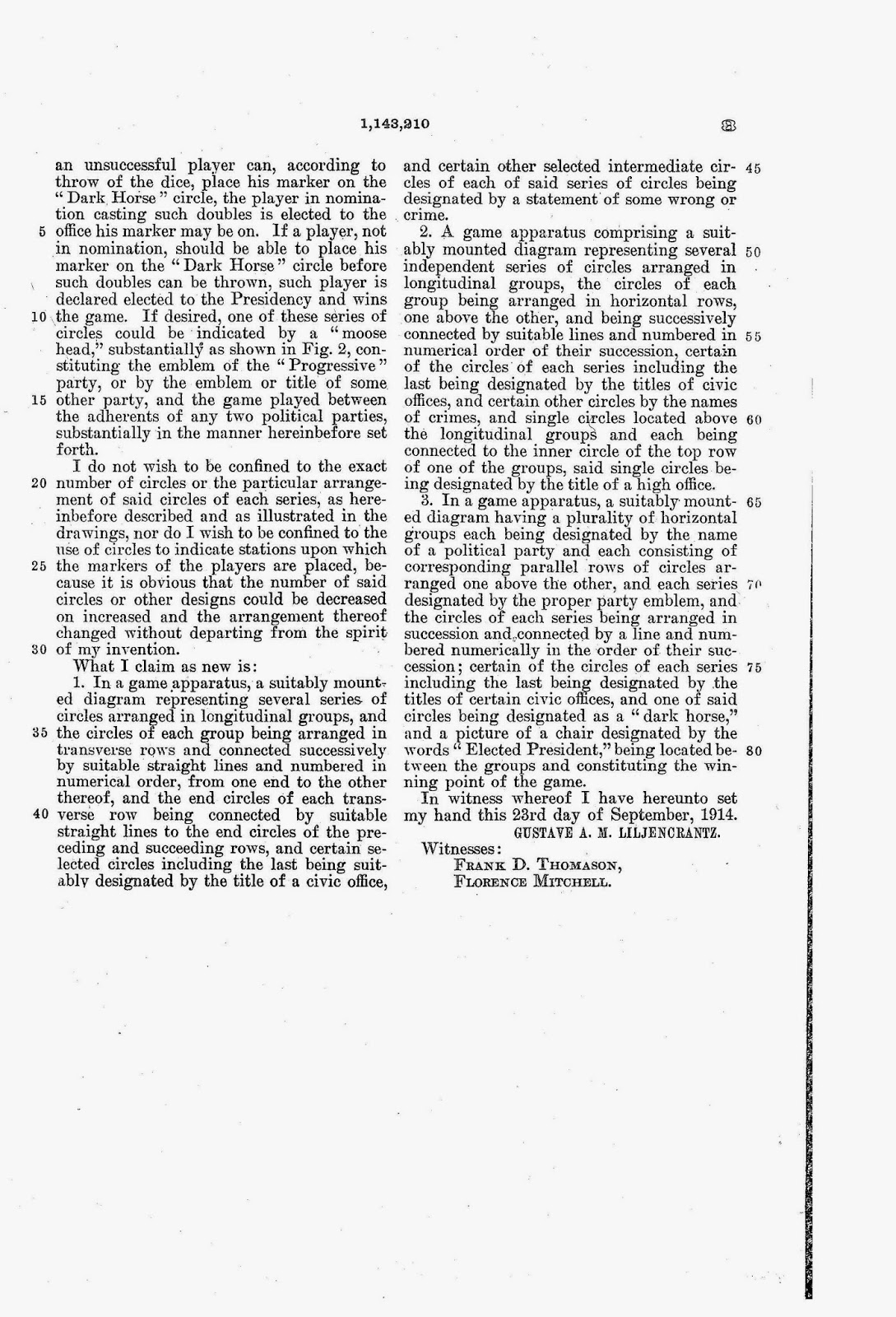 Gustave Liljecrantz retired in the spring of 1916 when he turned seventy-four.  He had buried his loving wife and his devoted daughter.  He was old and he was tired.  On August 10, 1916 he applied for a US passport.  He had a ticket to sail on the  Frederick VIII, leaving New York on September 6, 1916 for Sweden.  Here is his passport photo:

He said in his application he planned to stay in Sweden visiting relatives for "possibly one year."  He ended up staying there for the rest of his life - eleven years.

Readers of the Chicago Daily Tribune of November 6, 1927 saw the following article on page 12: 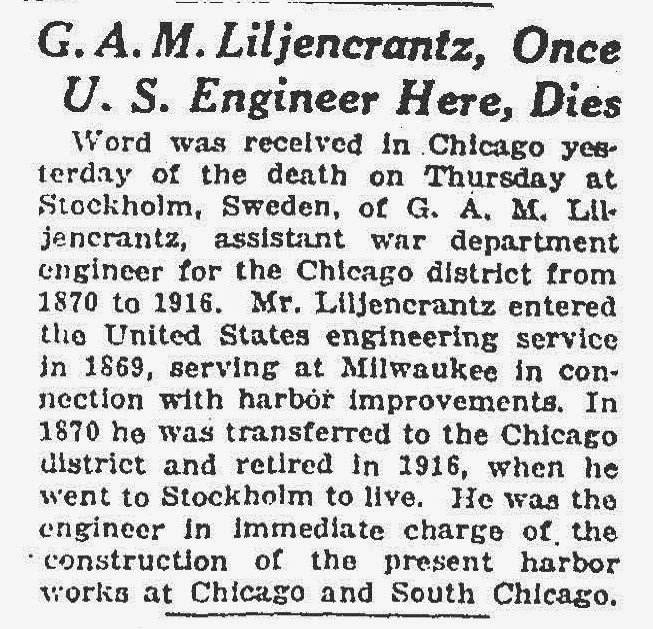 After his body was cremated, he joined his beloved Adaline and Otillie in the Rosehill mausoleum:
﻿

The death records for Ottilie Liljencrantz and Adaline Liljencrantz indicate their interment at Graceland Cemetery in Chicago.  In those days Graceland did have a crematory - perhaps they were cremated at Graceland and may have originally been interred there, but after seeing the magnificent Rosehill Mausoleum, the decision was made for all three to be interred at Rosehill. 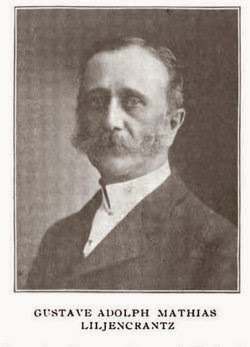 Gustave Adolph Mathias Liljencrantz, a civil engineer from Sweden who used his talents to make Chicago a better place - may he rest in peace.
Posted by Jim Craig at 3:02 AM