Last week we started our look at the life and times of Zolman S. Frank ("Zollie") from his origin in Dayton, Ohio to his purchase of a Chrysler-Plymouth dealership on Western Avenue in Chicago.  We also looked at how Frank and his brother-in-law Armund Schoen revolutionized fleet leasing of automobiles through their company Four Wheels.

Before we continue our look at the business side of Zollie Frank, let's take another look at his family life.  I reported last week that Zollie married Elaine Spiesberger in 1935.  Zollie and Elaine were blessed with four children:  Charles Edwin, Laurie Ann, James Samuel and Nancy D. Frank.  Ultimately all four of his children would end up working for Zollie Frank in one capacity or another.

In 1953 Zollie Frank made a decision that would change his life, and change auto sales in Chicago.  As he recounted, "In 1953, we switched to General Motors and bought Chicago's smallest Chevrolet dealership." The Chicago Daily Tribune carried the following notice in its "Bulletin Board" section of September 26, 1953: 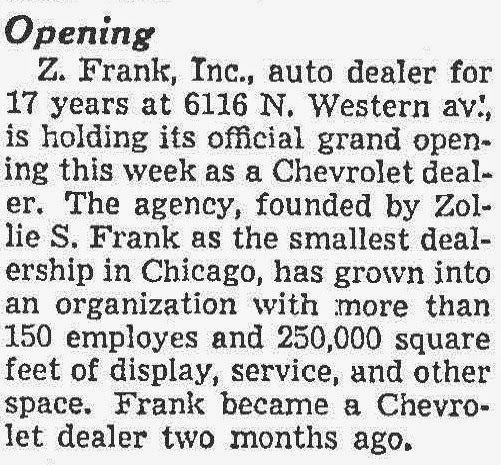 As always, Zollie Frank's timing was excellent.  Chrysler's days as a major player in the auto world were numbered - but Chevrolet in the 1950s was poised to become America's favorite automobile.

But what about that slogan "Z" Frank Before You Buy!!  Here's what Z. Frank himself said about it, "I came up with that line.  I wanted to be an institution, just like Marshall Field.  Whenever I met somebody I told them I owned a Chevrolet dealership, and make sure to see me, Z. Frank, before they bought a car.  I liked the way that sounded.  And that line, it's sold me a lot of cars." 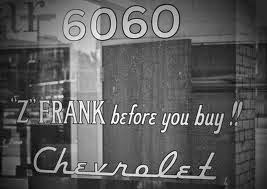 Here is a Z Frank ad from January of 1955 advertising the 1955 Chevrolets while really advertising "Z" Frank: 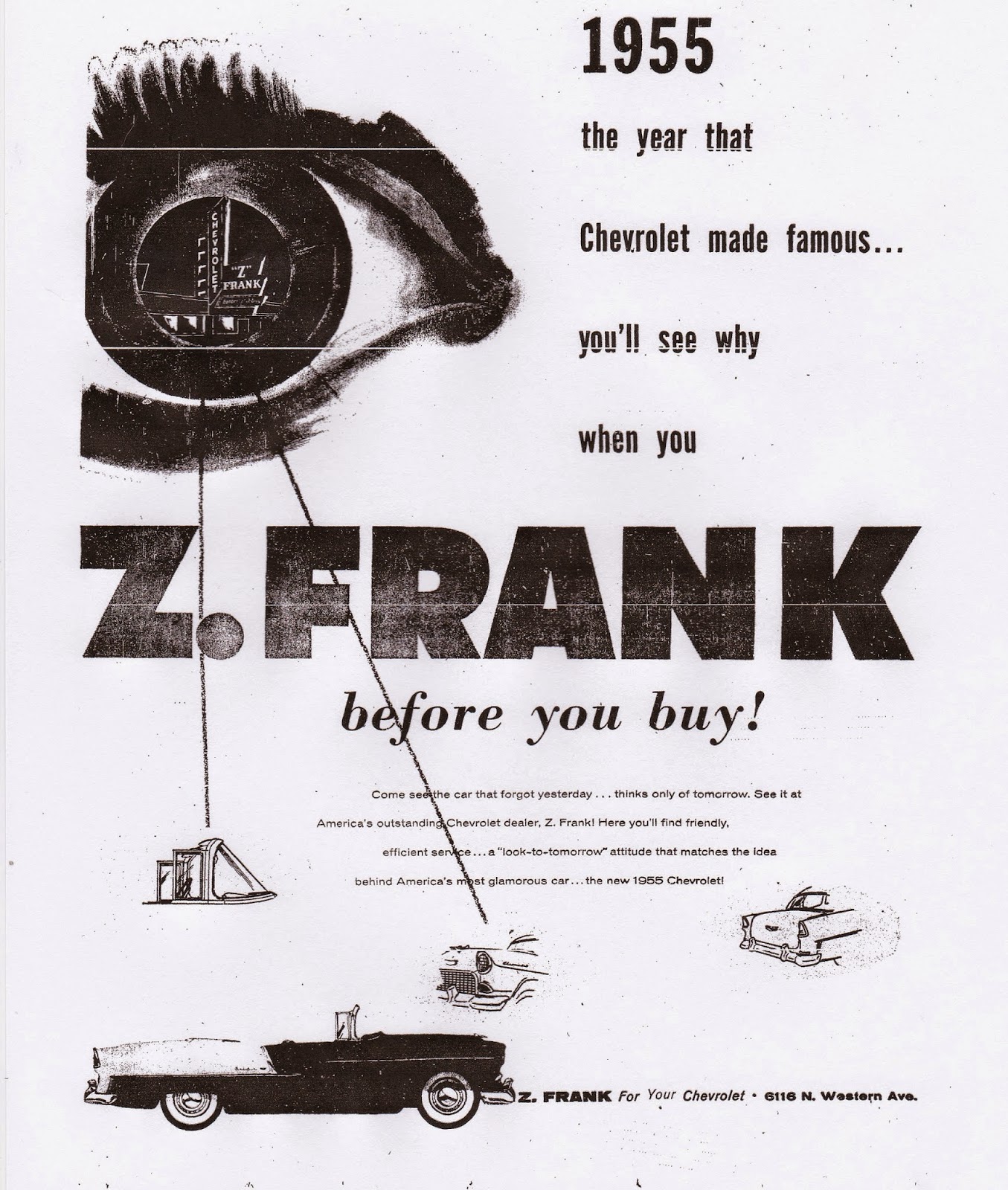 "March sales of new and used cars at "Z" Frank Chevrolet, Inc. set a new record for the month, rising 28% from a year ago, Z.S. Frank, president, reported." 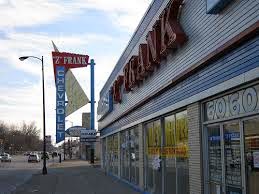 By the 1970s, Frank had so much influence at Chevrolet that he was even making recommendations on design:

The (Chevrolet) Vega's styling was judged conservative, clean-lined and timeless.  GM styling studio's main influence was the 1967-1969 Fiat 124 Sport Coupe AC, and the Chevrolet Camaro/Corvette studio grafted a 1970 Camaro-like egg-crate grille and Chevy-style dual taillights.  The original approved clay model had small rectangular front parking lights below the bumper.  One morning John DeLorean (GM Vice President and Chevrolet General Manager at the time) brought Zollie Frank, the owner of the world’s largest Chevrolet dealership ("Z" Frank Chevrolet in Chicago) into the styling studio to show him the clay and get his thoughts on the design.

Frank looked at the painted clay model, walked around it, then stood in front of it for a minute or so, and said: “Get rid of those wimpy-looking parking lights – they should be big, round things that look like European driving lights”.  DeLorean turned to the studio chief, told him to make the change Zollie wanted.  The modelers were put to work on large, round lamps and DeLorean and Zollie came back later that day to approve the change. DeLorean mentioned to the studio chief as they were leaving that “Zollie sells more Chevrolets than anyone else on earth – he knows what the customers like.”  The car went to production exactly as it was revised that afternoon.

Zollie Frank used his auto dealership, and the leasing business, to launch a financial empire.

By the 1980s, Zollie Frank was at the top of the business world.  In April of 1986 the Chicago Tribune wrote about the man they called "Mr. Chevrolet".  Here are some excerpts:

All told, he sits at the helm of Z Frank Chevrolet and 21 other business ventures that include various car dealerships, real estate, insurance, and his lucrative auto leasing operation with a fleet of 90,000 vehicles coast to coast.  Though he declines to discuss his wealth, Frank Consolidated Enterprises Ltd. last year ranked 8th on Crain's Chicago Business list of the top privately held Chicago companies.   His yearly revenues were at $631 million in 1985, but Frank is soon expected to cinch a deal that reportedly will push his yearly revenues near $1 billion.

White haired and vigorous, he is the epitome of entrepreneurism, a master of the gregarious handshake, the flashy smile, and of what it takes to get his name out into that great consumer-filled public domain. He is both a shameless self-promoter and a gracious gentleman who is proud, but not arrogant, of what he has done.

He has had private audiences with two American presidents (a three minute interview with President Roosevelt and a treasured private conversation and hot-dog lunch with President Kennedy on the presidential yacht).  He has pressed his give-away charms into the palms of two astronauts who carried them to the moon.  He has met with Prime Minister Jawaharial Nehru in India, acquired a fine collection of artwork, ivory and jade.  He maintains homes in suburban Winnetka and Palm Springs, Calif.  He donates generously to charity.  And for as long as anyone can remember, he has been on first name terms with General Motors big wheels.

By all accounts, he is respected for his "my-word-is-my-bond" trademark in the business world. 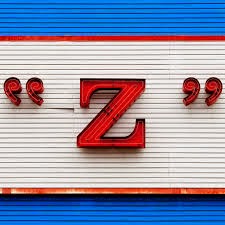 Here is a photo of the Frank's magnificent 5,500 square foot home at 657 Hibbard Road in Winnetka:

The article about Zollie Frank casually mentioned "He donates generously to charity."  That is an understatement.  The Zollie and Elaine Frank Fund was established in 1953 "Giving primarily for higher education and Jewish federated giving programs, agencies, and temples; funding also for arts and culture, health care and health associations, children and youth services, and social services."  Over the years the Frank family has donated tens of millions of dollars to charities, both through the Frank Fund and directly, including a $10 million gift to the University of Chicago in 2000 for scientific and medical education. 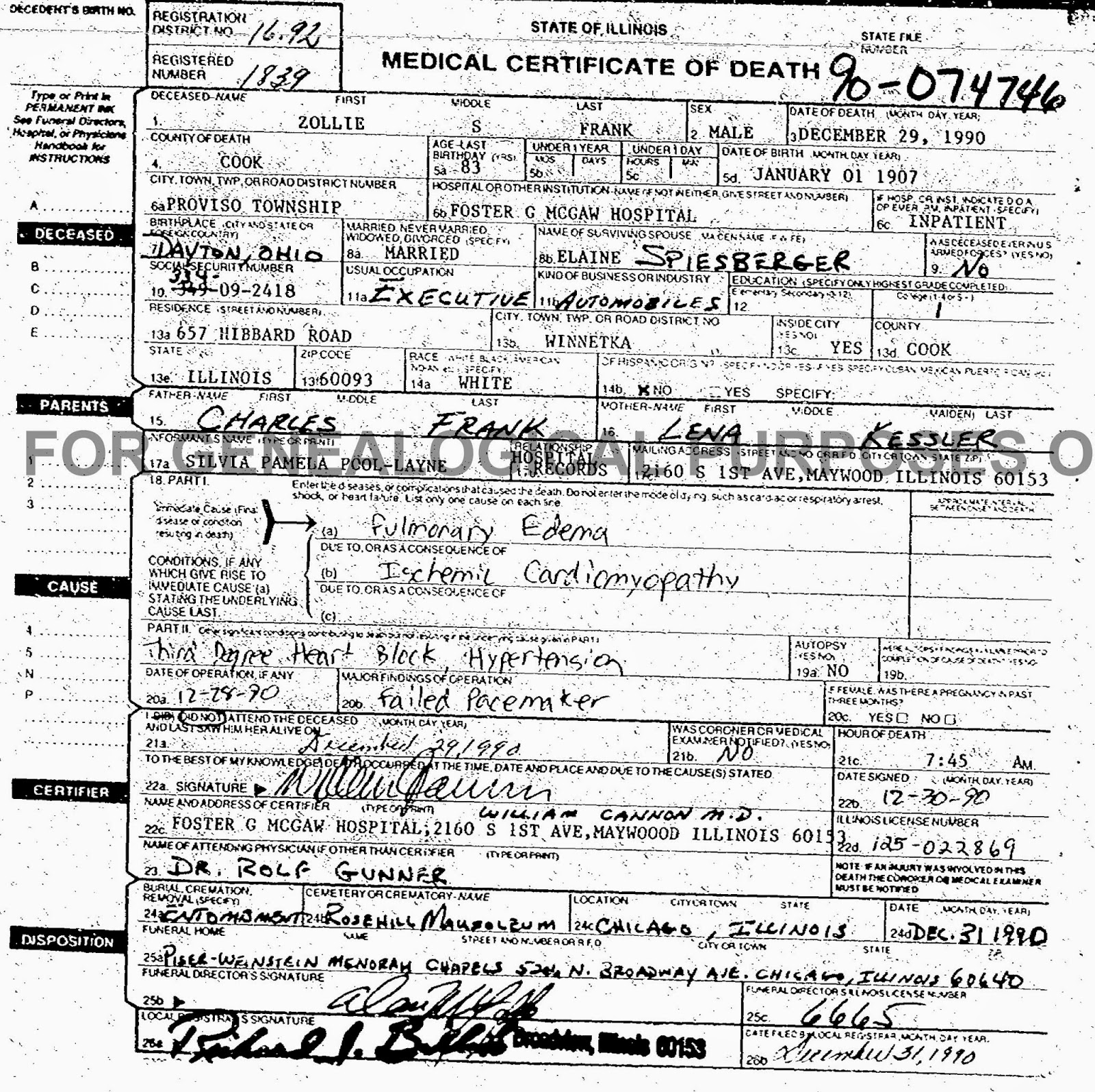 Here is his Obituary and Death Notice from the Chicago Tribune: 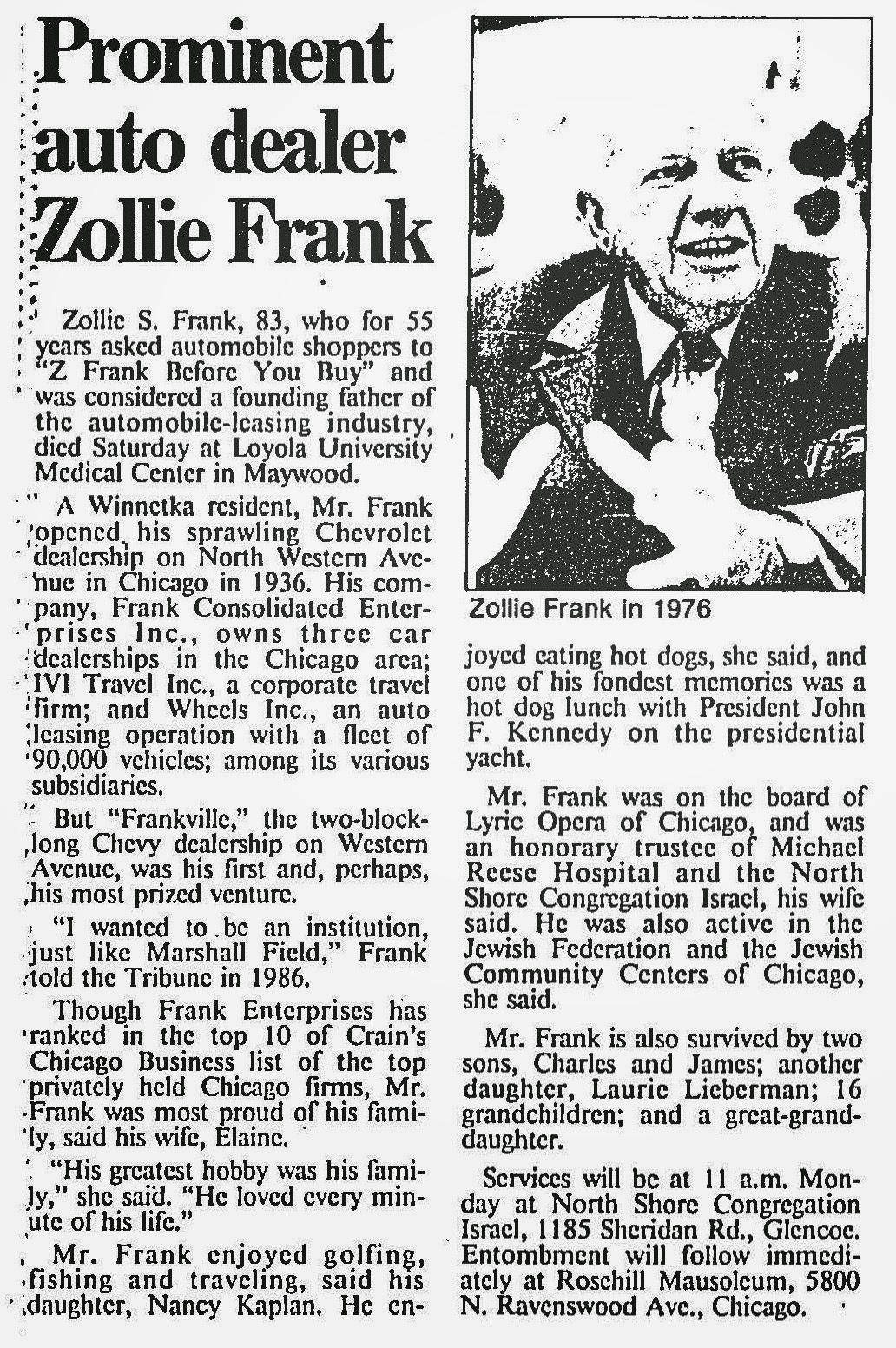 As it mentions in his obituary, Zollie Frank is interred in the Rosehill Mausoleum.  In fact, his crypt is right outside the door to the Elmer Arthur Hennig Chapel: 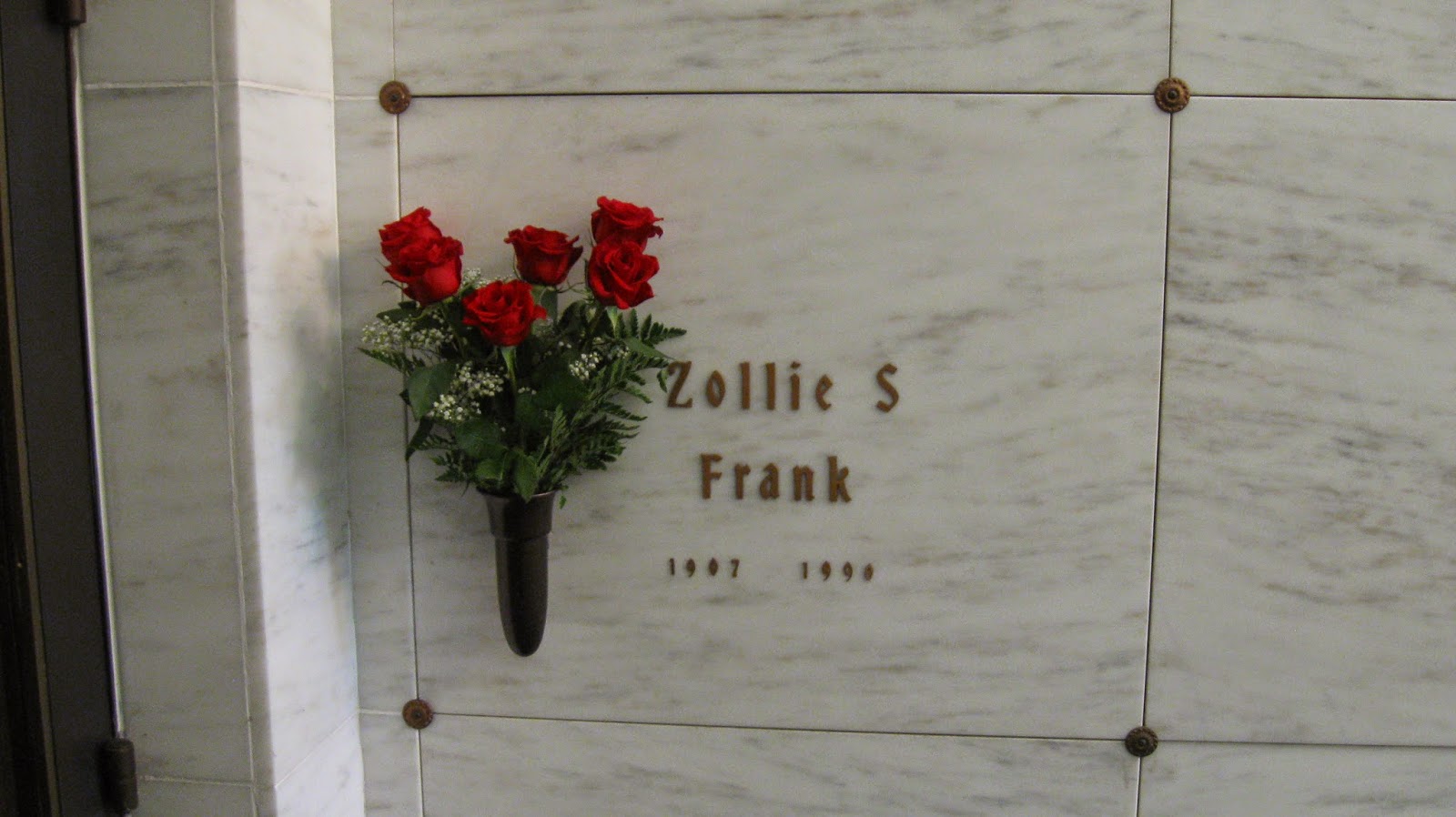 Zollie S. Frank - the consummate salesman, and a devoted family man, "His word was his bond."