In my blog entry from December 20, 2011 I told the story of Katharine Craig Stewart, member of a renowned Evanston family who died from the Spanish influenza on October 22, 1918 at the age of fifteen years and eight months.  When I wrote the story I only was able to feature photos of her crypt at the Rosehill mausoleum, as well as her death certificate - I was unable to find any photos of Katharine.  Recently I came in contact with an extended relative of Katharine and I was thrilled to find that he not only had one photo of Katharine, he had several - and he was willing to share them with me, and allow them to be used in the blog.  I think it adds so much to a story to have at least one photo of the person whose story is being told.  So, updated with photos and some other material I was able to "dig up", here is the updated story of Katharine Craig Stewart:

The Spanish influenza struck terror in the hearts of everyone who encountered it.  Said to have been brought back from Spain by the soldiers coming home from World War I, this "flu" struck down the young and healthy.  According to Wikipedia, "Influenza may have killed as many as 25 million people in its first 25 weeks. Older estimates say it killed 40–50 million people, while current estimates say 50—100 million people worldwide were killed. This pandemic has been described as "the greatest medical holocaust in history" and may have killed more people than the Black Death.  It is said that this flu killed more people in 24 weeks than AIDS has killed in 24 years, more in a year than the Black Death killed in a century."

Illinois was not immune.  It is estimated that over 8,500 people died just in the City of Chicago.  Entire sections of cemeteries are dedicated to Spanish flu victims.  Over time I will relate the stories of several of the victims of the Spanish flu, but I will start with the story of one close to home, in Evanston, Illinois:

Bishop Stewart was said to have been one of the greatest preachers ever produced by the Episcopal Church.  When I asked my mother (a life-long resident of Evanston) about him, her reply was "Everyone knew Bishop Stewart.  It didn't matter whether you were an Episcopalian or not."  Katharine's mother's family the Clydes, were an illustrious Scots-American family.

The 1910 US Census shows seven year old Katharine living with her family at 414 Greenleaf Street in Evanston:

Katharine started feeling ill on October 7, 1918 and was dead fifteen days later on October 22, 1918. Public assemblies, including wakes and funerals had been forbidden to try to slow the spread of the disease.  In fact, Katharine's father was not even in the United States when she died. Bishop Stewart was in Europe ministering the the soldiers at the front. Katharine died at 7:12 PM on Tuesday evening the 22nd and was interred less than two days later on Thursday the 24th. The cause of death for her was "Influenza with Pneumonia," as it was with so many others. 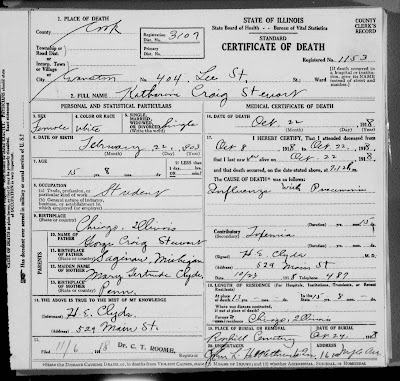 Her obituary in the Chicago Tribune of October 23rd said that the funeral notice would be "later":

Now that we have photos, let's look at the young girl who was snatched from our midst by the flu.

A sad story - but just one of thousands in Chicagoland from the scourge of the Spanish influenza.  Katharine Craig Stewart is interred in Unit A ("the old section") of the Mausoleum in Rosehill Cemetery, Chicago.  May Katharine, her dear parents and siblings rest in peace. 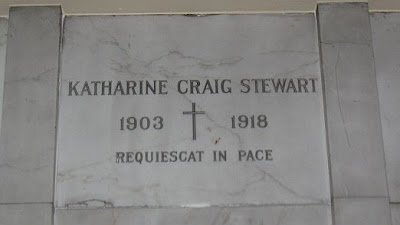