THE TERRIBLE STORY OF THE SUDDEN DEATH OF - Edward Harvey

I did not know my aunt Rachel Craig (nee Harvey) very well.  She was married to my father's oldest brother Raphael Craig.  I know that my aunt suffered terribly from multiple sclerosis so to visit we had to go to them, rather than them coming to see us.  They lived way out on the south side of Chicago and in the days before expressways, going to see them was an all-day trip.  Aunt Rachel died in February of 1959 and Uncle Raph followed her in January of 1960.

It wasn't until years later when I was doing genealogy research that I found out the terrible story about the sudden death of Aunt Rachel's father, Edward Harvey.  Through ancestry.com I was contacted by Rachel's nephew Cliff Harvey and he filled me in on all the details about the Harvey family.  Before we look at the story of Edward Harvey's sudden death, let's take a look at his life.

Edward shows up on the 1880 US Census as a three year old along with his parents and younger brother.  Michael Harvey indicated his occupation as "Laborer."

Sometime between 1881 and 1885 Michael and Katherine were divorced.  After the divorce Edward lived with his father in Streator, Illinois.

The 1900 US Census shows Edward living with John and Daisy Miller on their farm in Long Point in Livingston County, Illinois.  He was employed as a farmhand.

The 1910 US Census shows the young Harvey family living in Bennington, Illinois.  Thirty-two year old Edward, a carpenter for a house builder, twenty-three year old Grace, and the children Gale, Ray, Rachel and Carl.  They were renting their home "Lots 1, 2, 3 and 4 north of 14th Street."

That brings us up to the terrible accident that took the life of Edward Harvey.  Here is the account from the Lacon Home Journal:

It has been truthfully said that in the mist of life we are in death and the sudden passing of Edward Harvey of this city about four o'clock last Monday afternoon is another evidence of what an uncertain quantity is life.

Mr. Harvey was employed with the line crew of the Public Service Company that was working on the city road west of the bridge.  Lines of wire were being changed and two long wires were tied to Edward McMahon's wagon.  He started to drag them a short distance, it being the intention to anchor them to an electric light pole so there would be no danger of them getting on the road. The wires were being pulled over the cross arms on several electric light poles and when one of the wires was about to pass over one of these cross arms it flew up and came in contact with a live wire of the high line carrying 4,400 volts of electricity.  Mr. McMahon noticed that something was wrong, as his team became almost unmanageable.  Almost at the same time Mr. Harvey started to untie the wire from the wagon.  No sooner had he touched it than he went down like a man struck with an axe.  As usual in such cases he was unable to let loose of the fatal wire and death must have been almost instantaneous.  Mr. McMahon was only slightly shocked, due to the fact that he was sitting on a dry blanket and had on shoes with rubber soles.  The wire that caused the death of Mr. Harvey came in contact with a pole along side of the road and there were reports like the crack of a pistol while fire flew in every direction.  The right hand of the unfortunate man was burned at one place to a crisp and there was also a seared place on his neck where the wire had burned.

Drs. Bradford and Bennington were quickly summoned and the force of the workmen of the Public Service Company worked with the stricken man for almost two hours in an attempt to revive him, but in vain.  It is probable that he was dead in a few minutes after being stricken with the fatal current.
No one appears to have been a fault, the accident simply was one of those sad affairs that will occasionally occur in work of this kind.


The county coroner came over Tuesday and held an inquest at the Lenz Undertaking establishment were the body was taken after all hope of revival had been abandoned.  A verdict of accidental death was returned by the jury, which was composed of the following: Louie Lenz, Foreman, John Shafer, John Ludke, Turner Black, Ralph Jenkins and Frank Lewis.


Edward Henry Harvey was born in Lacon on September 25, 1877, being a son of Mr. and Mrs. Michael Harvey.  He had lived the greater part of his life in Lacon, altho he sent a part of his earlier years in Streator with his father, his parents having separated.  He was married in this city on January 07, 1905, to Grace Deffenbaugh.  There were born to them eight children, all of whom with the wife survive him.  He is also survived by his parents, his father living in Manville, near Streator, and his mother, now Mrs. George Finkenbinder, of this city, and also one brother, William Harvey.  The children are seven boys and one girl, Gail, Ray, Rachel, Carl, Clifford, Lowell, John and Walter.  There are also one half brother and two half sisters living in Streator.


The funeral was held yesterday at the residence at 2 o'clock, Rev. L. M. Thompson officiating, and the interment made in Lacon Cemetery.

Here is Edward's tombstone in the Lacon City Cemetery: 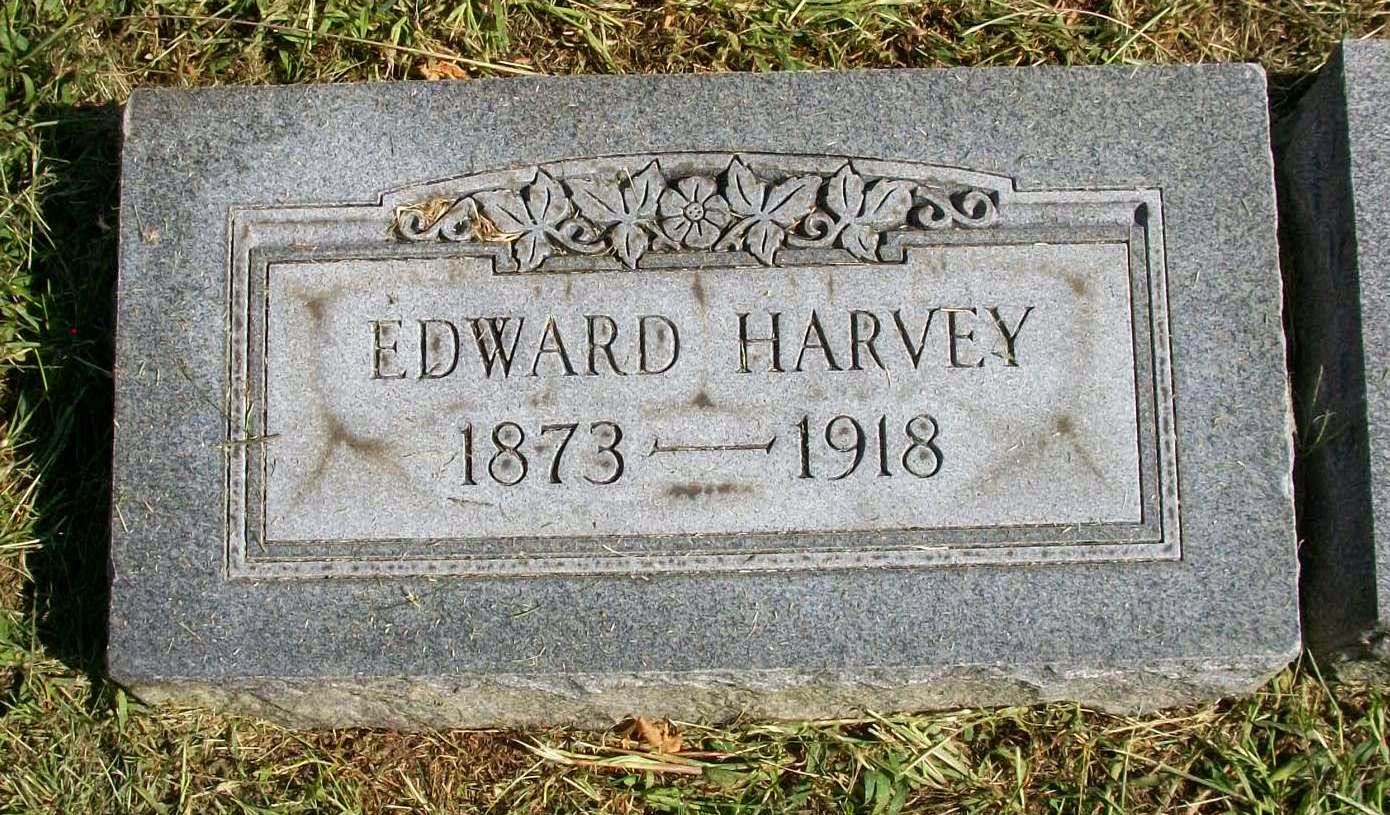 So that's the terrible story of the sudden death of my Aunt Rachel's father, Edward Harvey - struck down in the prime of life leaving a widow and eight(!) children.

Edward Harvey - May he rest in peace.
Posted by Jim Craig at 2:55 AM