Of all the things one encounters when doing genealogy research, the hardest to understand is suicide. What could possibly compel someone to end their life when we know that self-preservation is the strongest of all our instincts?  Yet when tracing a family tree it is not at all unusual to encounter at least one instance of suicide, and perhaps more.

By today’s standards, Harriet A. Munroe Lathrop of Racine, Wisconsin had it all.  She was happily married to a devoted husband, she had a beautiful home and was a member of one of the “first-families” of Racine. Money had never been an issue – Harriet came from money and married money - the Lathrops were very well-to-do.  Her husband William Henry Lathrop was a noted banker and in fact the Lathrop family had been one of the founding families of Racine.
So why then, people wondered, did she choose to end her life on the evening of December 11, 1887 by walking into the Root River from the Goodrich Dock at the foot of Lake Avenue?  Before we look further into the events surrounding the death of Harriet Lathrop, let’s see what we can find out about her life.

History does not record how they met; perhaps when William Lathrop was back in Vermont settling his father’s estate, (Hubbell Lathrop had died March 19, 1842 in Vermont,) but we do know that Harriet Munroe married William H. Lathrop in Shaftsbury, Vermont on June 22, 1842.

William Henry Lathrop was born in Manchester, Vermont on July 13, 1816 to Hubbell Lathrop (1779-1842) and Laura, nee Brownson (1786-1841).  William Lathrop started his career working on his father’s farm, then he turned to merchandising for two years.  In 1840 Lathrop sold his business interests, and with his brother Austin headed west, ending up in Racine, Wisconsin.

By all accounts, the marriage of William and Harriet Lathrop was a happy one.  After concluding their affairs in Vermont, the newlyweds traveled back to Racine on the steamer “Chesapeake.”  They arrived on a bright Sunday in July, 1844.  As the “Chesapeake” steamed into the harbor it was met with cannons booming and people shouting.  Harriet Lathrop thought that she had been brought to a wild part of the country where the Sabbath was not observed, but she found out instead that the celebration was because the “Chesapeake” was the first steamer to enter Racine Harbor.

Mr. and Mrs. W.H. Lathrop settled into a comfortable home on the corner of Park Avenue and Sixth Street in Racine (now a commercial area). During this time, William Lathrop had maintained a 240 acre farm just beyond the Racine Rapids, which he visited on a daily basis.  But after several years of farming he had had enough, so he sold the farm and branched out into banking, grain elevators and railroads, becoming richer and more successful as the years went by.

Back on the home front, the Lathrops were blessed with a daughter, Genevieve, who was born April 1, 1843, but as so often happened in those days, young Genevieve died February 3, 1845 of the croup, just short of her third birthday.  Since it was the Lathrop’s intention to remain permanently in Racine, they purchased a plot for Genevieve in the Mound Cemetery .

The Lathrops were blessed with a son, Frank, born June 10, 1847, but their happiness was short-lived when Frank died October 3, 1847 – not even one year old.  Frank is buried next to his sister Genevieve in the Mound Cemetery in Racine. 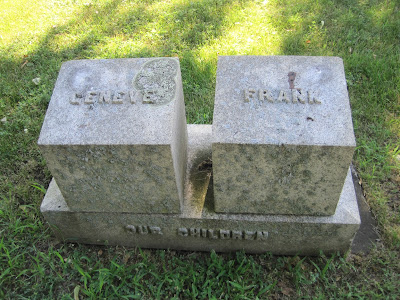 The Lathrops did not have any more children.

It was not all sadness for the Lathrops.  During the winter of 1856-57, Mr. and Mrs. Lathrop visited Havana, Cuba, returning home by way of Washington, to witness the inauguration of President Buchanan.

The 1860 US Census just has William and Harriet home in Racine, along with twenty year old Emma Kirsben from Germany – a servant.  William Lathrop listed his occupation this time around as “Produce Dealing.”

It has not been recorded as to when Harriet Lathrop’s health began to deteriorate, but we do know that she and Henry spent nine months in California during 1872-1873, during which Harriet’s health became partially re-established.

Unfortunately the improvement was only temporary, and over time Harriet Lathrop’s health continued to deteriorate, as William’s fortunes grew.  He ended up with a myriad of business dealings, prospering as a grain dealer and elevator owner, real estate and railroad speculator, as well as bank director and brick manufacturer.

The 1880 US Census shows sixty-three year old William H. Lathrop with his fifty-eight year old wife Harriet (their ages seem to move up and down a sliding scale), and Harriet’s forty-five year old sister Ellen Munroe Brown.  For this census, Lathrop lists his occupation as “Gentleman”, Harriet is “Keeping House” and Ellen Brown is a “Lady.”

In 1883 the Lathrops moved into a new house William had built for them on Main Street in Racine. By the summer of 1885 Harriet’s nervous malady had deteriorated into mental derangement.  Her constantly expressed longing had been to rest by “going away to God,” and that brings us to the fateful night of December 11, 1887.

For what happened next, I will quote from the Portrait and Biographical Album of Racine and Kenosha Counties, Wisconsin, published in 1892, “She had retired at an early hour and taken her goodnight leave of sister and nurse in the peculiarly affectionate and engaging manner habitual to her during the two and a half years of her illness.  On going to her room about nine o’clock, her husband found her apparently in a gentle sleep. Awakening at one, he missed her from his side, and alarming the household, made an unavailing search, until going to the street door, where steps were traced in the light snow along Lake Avenue to the Goodrich dock, and there ended on the verge, with marks on the snow which her garments had brushed as she made the last step into the river."

William Henry Lathrop immediately launched a search for the body of his deceased wife.  Here's a blurb from the Oshkosh Daily Northwestern from December 20, 1887 after the search had gone on for nine days: 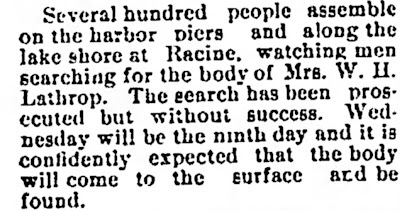 The search continued unabated through the cold winter months.  Even a substantial reward posted by the grieving widower made no difference.

Harriet Lathrop's body was finally discovered north of Kenosha by two boys on May 2, 1888.  Here's the story: 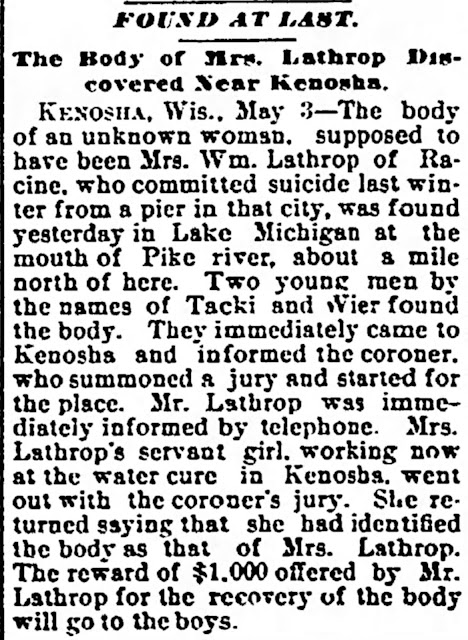 Now that he had a body to bury, William Lathrop could have a funeral, which he did on the day after the body was discovered, May 3, 1888. Harriet Munroe Lathrop was laid to rest next to her children who pre-deceased her in the family plot at Mound Cemetery in Racine: 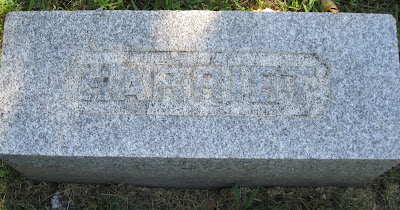 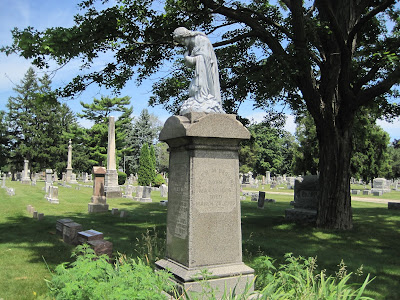 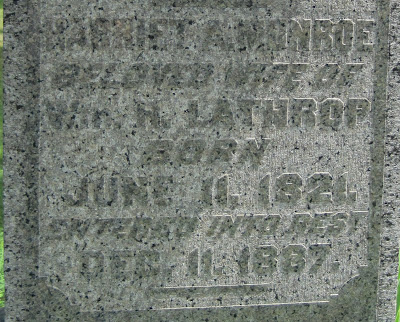 A female statue, poised in anguish above the graves of the Lathrops, speaks to the suffering upon the family: 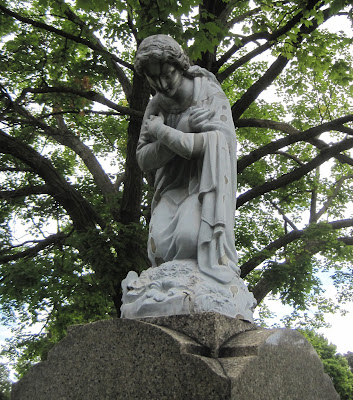 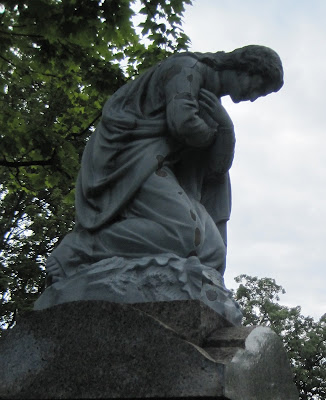 What made Harriet Lathrop decide to walk into the river on that December night so long ago?  We will never know for certain.  The approach of Christmas was just another reminder that she had lost both of her children and would spend yet another holiday childless.  It is almost 128 years since the death of Harriet Lathrop, but even now diagnosing and treating mental illness is often a guessing game.  We can only hope that Harriet Lathrop found the happiness in the next world that had eluded her in this one.

Harriet Munroe Lathrop - May she rest in peace.
Posted by Jim Craig at 6:22 AM