On August 19, 1895, two brothers, Arthur and Walter Butler of Evanston, Illinois drowned in Lake Michigan.  The tragedy was, of course reported by the Chicago newspapers.  In this article I am going to take a look at how the incident was reported by two of the major Chicago daily newspapers of the time:  The Chicago Daily Tribune and The Chicago Inter-Ocean (I have always loved that name for a newspaper).  It is amazing how differently the newspapers reported the story.

First, we will look at the story as reported by the Chicago Daily Tribune on August 20, 1895:

FOUR ARE DROWNED
Two Boys, a Man and a Girl Perish in Lake Michigan.
Victims of the Accidents Were Swimming - Arthur and Walter Butler, Brothers, Lose Their Lives at Evanston - Florence Millard of Highland Park is Carried Down by the Undertow - Thomas Walsh, a Laborer, Drowns on the South Side in the Presence of Many.

Four persons were drowned in Lake Michigan yesterday.  Two boys, a young girl, and a man were victims of the accidents.

Arthur H. and Walter Butler, brothers, were drowned at Evanston.  The boys had gone in swimming.  Walter was carried beyond his depth by the undercurrent and Arthur went in to save him and both went down together.  Their bodies were discovered two hours later.

The boys were sons of Joseph H. Butler, No. 944 Sherman avenue, and clerked in their father’s grocery store in Main street, South Evanston.  Hundreds of people lined the shore while the search for the bodies was going on.  An inquest will be held at Palmer’s morgue, Chicago avenue, this morning, where the bodies were taken.

A younger brother accompanied the Butler boys to the lake and remained on shore while they went in swimming.  As soon as he realized his brothers were drowning he jumped into the delivery wagon in which they had gone to the lake and drove at breakneck speed for the South Evanston Police Station.  Policeman Johnson saw the wagon coming.  Thinking it was a runaway he ran out and stopped it.

The frightened boy told him breathlessly that his two brothers were drowning and the policeman got in and drove to the lake.  The life-saving station was notified and the members of the crew hastened to the rescue on their bicycles.  A systematic search was begun, the men taking hold of hands and wading back and forth through the water.

At 1:50 Walter Butler was found 250 feet south of where the accident occurred.  Although he had been in the water oven an hour Capt. Lawson and his crew went hard to work to resuscitate the young man.  They had been at work half an hour when Dr. Kauffman arrived and pronounced him dead.

An hour after the recovery of the first body Benjamin Spencer, No. 1031 Judson avenue, found Arthur’s body 500 feet south of where he had been drowned.

The Tribune article went on to report the circumstances of the drowning of Florence Millard and Thomas Walsh, but for purposes of this article, we will just look at the Butlers.

The loss of the Butler brothers was a terrible tragedy to be sure – one brother drowned trying to save another brother who also drowned.

Before we take a look at this same incident as reported by the Chicago Inter-Ocean, let’s see what we can find out about the Butler family of South Evanston, Illinois:

Somewhere along the way Joseph Butler met Annie Woodman and they were married in 1866.  In addition to the three boys mentioned in the article, the Butlers were also parents to five daughters.  Here is the lineup of the Butler children:

All of the Butler children were born in Illinois, except Annie, who was born in London, Ontario, Canada.  History does not explain how this came to be.

By the 1880 US Census, the Butlers were living in the Village of South Evanston, Illinois.  Joseph was a “Salesman”, Anna was still “Keeping House” and by now the children were Annie, Alice, Arthur, Walter, and six month old Ralph who was referred to as “Baby Butler.”

The 1890 Census for Evanston is unfortunately lost, however we do have Evanston City Directories from that era, and the directories mirror the growth and changes as South Evanston, and then the City of Evanston grows and matures.  Here is how the directories list the Butler grocery business and the Butler family home from 1882-1895:

1895  (City of Evanston)
Grocer:  701 Main
Residence:  944 Sherman Av.  (This is actually a mistake - Benson Avenue was changed to Elmwood, not Sherman).   Later directories correct this error).

That brings us to that fateful day of Monday, August 19, 1895.  The weather forecast was typical for a Chicago day in August: clear and windy, 85 degrees.  A perfect day for swimming in Lake Michigan.

Here's the Chicago Inter-Ocean's description of what happened to  the Butler brothers:

DIED IN EACH OTHER'S ARMS
Brothers, Venturing Too Far in the Surf, Drowned at South Evanston

Arthur Butler, aged 19 years, and Walter, his brother, aged 17 years, lost their lives yesterday afternoon in Lake Michigan, off the shore of South Evanston.  The tragedy occurred in the presence of Raelbe (sic) Butler, a third brother, two years younger than Walter.

The three boys, who are the sons of J.H. Butler, a grocer doing business on Main street, South Evanston, had driven in their father's delivery wagon to the lake shore.  When the party reached the foot of Rinn street the boys alighted and commenced trying to see how near they could venture to the waves, which were rolling quite high, without getting wet.  Becoming bolder, Walter finally waded into the water, and was soon followed by his eldest brother, Arthur.  They had been out but a short time when a huge breaker approached Walter, who was the farthest from shore, knocking him off his feet.  The boy screamed for help, and Arthur, hearing his cries, made a heroic effort to rescue him.  By the time Arthur had struggled to where Walter had fallen, the latter had only sufficient consciousness to clasp his brother about the neck, and in doing so, dragged his would-be rescuer beneath the waves.

During the brief struggle, Raelbe had been sitting upon a pier close at hand.  He saw his brothers floundering in the water but was powerless to aid them.  In despair he rushed toward the shore, screaming loudly for assistance.  His cries were heard by Ben Spencer, of No. 1631 Judson street, who chanced to be in the vicinity at the time.  W.P. Kay, of the life saving crew, stationed at Evanston, also observed the boys' distress and hastened to the rescue, but by the time the men had arrived upon the scene both brothers were drowned.

Kay waded out, and after some trouble, succeeded in recovering the body of Walter, and Spencer looked after that of the other young man.  The remains were conveyed to C.W. Palmer's undertaking room, and Raelbe carried the sad intelligence to his parents.

It was the same story, but it was reported vastly different by the two major newspapers.

Later that week the newspapers reported that the Coroner's Jury brought in a verdict of accidental death and recommended that the police station at South Evanston be supplied with a life-saving outfit.

After the Coroner's jury had reached their verdict the bodies of the two Butler brothers were released for burial.

Arthur and Walter Butler were buried in an unmarked grave in Section 119 of Rosehill Cemetery in Chicago.  It is a large plot but the only grave in the plot to be marked is that of their sister, Alice Butler Newman. 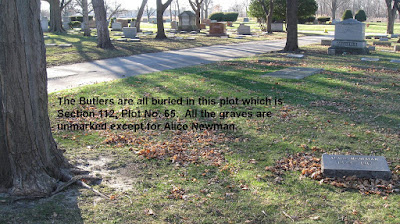 The boys' father, Joseph Butler died in Evanston on November 5, 1911 at the age of sixty eight.  Their mother, Annie Woodman Butler followed him on November 14, 1923.  She was seventy nine years old.  They are both buried in unmarked graves next to their sons in Section 112 of Rosehill Cemetery.  ﻿

So now you know the story of Arthur and Walter Butler who lost their lives in Lake Michigan on a warm sunny day in August of 1895.  They may have been all but forgotten, and even lie in an unmarked grave but despite that, we remember them here.

Arthur and Walter Butler - may they rest in peace.
Posted by Jim Craig at 3:25 AM