Prior to the current occupant of the White House the most famous president who called Illinois home was Abraham Lincoln  (Ronald Reagan notwithstanding).  Although Lincoln himself is buried in Springfield, Illinois, many of his friends and intimates are buried in Chicago.  While in Rosehill Cemetery recently working on a roster of Civil War dead, I came across the imposing black stone monument to one of Lincoln's closest friends and associates Leonard Swett.  Forgotten today by all but a few Lincoln enthusiasts, Leonard Swett led a remarkable life - and there are those who say that Lincoln would never have made it to the White House if it had not been for the behind-the-scenes work of Swett.  The Chicago Daily Tribune gave Leonard Swett an impressive obituary when he died in June of 1889: LEONARD SWETT IS DEAD
Chicago Thus Loses a Citizen of National Reputation.
One of the Most Prominent Lawyers of the Northwest, He Was the Intimate Friend of Lincoln, Whom He in Many Respects Resembled - A Sketch of His Career as Lawyer - Famous Cases That He Won.
Leonard Swett is dead.  Chicago loses one of her foremost lawyers and the country a man who has been prominently identified with its history and progress.
The particulars of Mr. Swett's death  are short.  He had been in unusually good health for two years.  He had not lost a day at the office nor before the court until last April.  At that time he went to Bloomington to deliver a lecture on Lincoln.  His old neighbors gave him dinner after dinner and reception after reception.  He came home ill.  A severe cold aggravated a case of diabetes, with which he had before been troubled.  After his return he was able to drive occasionally and to go to the office once in a while.  There was no apprehension whatsoever concerning his life until yesterday morning at 2 o'clock.  At that time he became unconscious.  Drs. Lyman, Johnson, Davis and Westcott were called, but nothing could be done.  He never regained consciousness.  At noon yesterday, Mr. Swett passed away.
The funeral will be held Tuesday afternoon at 2 o'clock, from the Third Presbyterian Church.  The Rev. Dr. Withrow and the Rev. Dr. Thomas will conduct the services.
His Career

Mr. Swett afterwards tried many murder cases.  He never lost but one before a jury.  None of his clients except the (Haymarket) Anarchists ever suffered the extent of the law, and he only appeared in this case in the appeal to the Supreme Court.
Among other famous cases was his defense of Alexander Sullivan in his trial for murder.  He was successful in a great insurance case at Hartford, which involved a new application of the laws of conspiracy.  His argument in that case is still studied by attorneys.  He was engaged to defend some of the great whiskey cases from the charge of conspiracy against the United States.  He was asked when the case would come to trial.  "Come to trial?" he said, "This is not the kind of a case to come to trial."  And it never came to trial, though the similar cases which were tried landed the defendants at Joliet.
Mr. Swett was also retained in the Mackin case, but did not take an active part in the trial owing to sickness.
Mr. Swett was married July 20, 1854 to Laura R. Quigg, sister of his former law partner, Col. David Quigg.  They had one child, Leonard H. Swett.  Mrs. Swett died in February, 1886.  July 15, 1887, Mr. Swett married Miss Louise Decker, who had long acted as his private secretary.
When he came to Chicago in 1854, he engaged in practice first with Andrew Harvie, then with Joseph E. Gary and J.N. Barker.  In 1869 he became Corporation Counsel, and after several years in that position organized the firm of Tuley, Stiles & Lewis. IN 1879, Mr. Swett  and Pliny N. Haskell were associated together, and this continued until Mr. Haskell's death, in 1884.  The present firm was Swett, Grosscup & Wean, being composed of and besides Mr. Swett, P.S. Grosscup and Frank L. Wean.
Col. Munn's Reminiscences
Col. D.W. Munn was surprised last evening when a reporter called at his house, No. 458 West Adams Street and told him that Leonard Swett was dead.  Col. Munn had thought that Mr. and Mrs. Swett were in Germany, and had gone there in search of improved health for Mr. Swett.  Col. Munn said that he first met Leonard Swett as the Illinois Republican State Connvention held in Deactur in 1860.  At that time Mr. Swett was a prominent lawyer of Bloomington, and was a candidate before teh Decatur convention for the nomination of governor.
"His opponents in the convention", said Col. Munn, "Were 'Dick' Yates, Norman B. Judd and 'Tom' Marshall.  Subsequently Mr. Swett was active in the support of the nomination and election of Lincoln for President.  After that he dropped out of politics until David Davis, a fellow-townsman, became a candidate for United States Senator, when Swett supported his enthusiastically.  I don't remember exactly when Mr. Swett came to Chicago, but after his arrival here he soon became one of the most famous lawyers in the city.  Two of these died before Mr. Swett; they were W.W. O'Brien and Emery A. Storrs.  Swett was a man of ability and integrity.  In many respects he resembled his intimate friend, Abraham Lincoln and especially so in that he was a good jury lawyer and had the faculty of impressing a jury with the fact that he was an honest man-as he undoubtedly was."
Chicago Daily Tribune - June 9, 1889
As we knew, Leonard Swett moved in impressive circles.  What the Tribune article doesn't say, is that Swett and Louise Decker were personally married by Patrick A. Feehan, the Archbishop of Chicago: 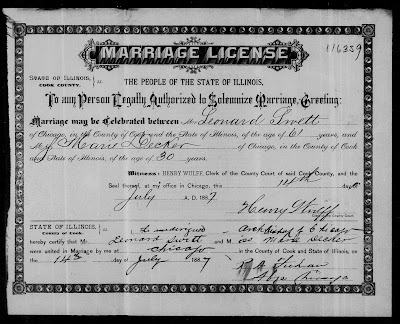 As I mentioned above, Leonard Swett's impressive monument can be found over his grave in Section 104 of Rosehill Cemetery, Chicago, Illinois. Patriot, statesman and close friend of Abraham Lincoln, may Leonard Swett rest in peace.
Posted by Jim Craig at 6:35 PM