I have previously told the stories of Meyer Iglowitz, who drowned on a trip to Michigan in 1913, and Harry, Lottie and Bessie Iglowitz who died in an arson fire in 1911. Another tragedy befell a member of the Iglowitz family on December 5, 1927 when actor/waiter Aaron Iglowitz, under his stage name of Harry Smith was gunned down in cold blood in front of the Parody Cafe in downtown Chicago.  Harry was just in the wrong place at the wrong time - or was he?  It made the front page of the Chicago Daily Tribune on December 5, 1927:

Parody Cafe Is Held Up by 6 Armed Men

Absolute terror reigned early this morning among nearly 200 guests of the Parody Cafe, 1023 North State street, when six masked men, armed with sawed-off shotguns and a pair of sub-machine guns, stalked out on the floor while more than fifty couples were dancing and ordered every one to throw up their hands...

It even made the New York Times:

Five Intruders Shot Down, Another Arrested -

The wildest Wild West hold-up in the history of Chicago night clubs resulted in the death of one person and the wounding of eight others shortly before 3 A.M. today when half a dozen masked robbers invaded the Parody Cafe' in North State Street and fought with pistols, shotguns and machine guns against a half-dozen policemen who happened to be guests, while 200 panic stricken merrymakers threw themselves on the floor to save their lives.

"When they say hello, they mean hello" sang two girl entertainers above the moaning of saxophones and the laughter of guests in the packed and dimly lighted cafe' as the leader of the robbers appeared suddenly closely followed by four others.

"When they say hello, they mean hello", he shouted. "Stick 'em up everybody."  A policeman, sitting at a nearby table, thought it was all part of the show.  Then to prod the slow ones, a couple of shots were fired into the ceiling.  "Hands up!", the leader shouted, brandishing his weapon.

The policeman, Sergeant Charles Cohen, shoved his wife under a table, drew his pistol, fired and missed.  The gang leader turned and fired, but missed the policeman, as one of the girl entertainers, who had been singing the "Hello" song, slumped to the floor.

Then there was a fusillade of shots as other policemen joined the fight. In the melee, the lights went out.  When the shouting ended and the lights came on, a waiter lay dead in a corner, killed as he raced for the street to summon help.  In the middle of the dance floor was huddled the crumpled form of the girl entertainer.    Nearby, at another table, another woman screamed.

The bandit leader and four of his companions lay wounded near the entrance.  The terrified guests made a rush for the exits that knocked over tables and chairs and smashed dishes.  The police came to find the panic-stricken merrymakers hurrying into the dawn.

The gang leader, who doctors said probably would die, was identified as Edward Cummings, married and the father of two children.  The dead waiter was identified as Harry Smith, and the girl entertainer, whose condition is critical, as June Griffith, 20.  Miss Fanny Hillman, a guest, was shot through the hand as she held it  above her head. Sergeant Cohen was shot in the exchange with the robbers.

Others wounded, all believed to be members of the bandit gang included William J. Malone, Abie Schaffer, Benny Silverman, and Rocco Rotuno.  Another man, also believed to have been involved in the hold-up, was arrested and he, along with the wounded suspects, was booked by the police on charges of murder and several charges of assault with intent to murder.
New York Times - December 6, 1927

Back to the Tribune article, which described in more detail the murder of Harry Smith (Aaron Iglowitz):
"Harry Smith, a waiter, was killed when he ran out the front entrance. He ran square into one of the bandit lookouts, and the top of his head was blown off by a single charge.  He fell in the doorway, where many were forced to jump over his body.  Police advanced the theory that he may have been killed intentionally, because being familiar with numerous night club frequenters, he may have recognized the lookout."

Poor part-time actor and full-time waiter Harry Smith...poor Aaron Iglowitz.   Harry Smith finally made it big on the front page of the Tribune, but he had to get killed to do it.  His death certificate lists the cause of death as "Shock and hemorrhage due to a bullet wound through the head.  Shot during holdup."  Let's hope that he never knew what hit him. 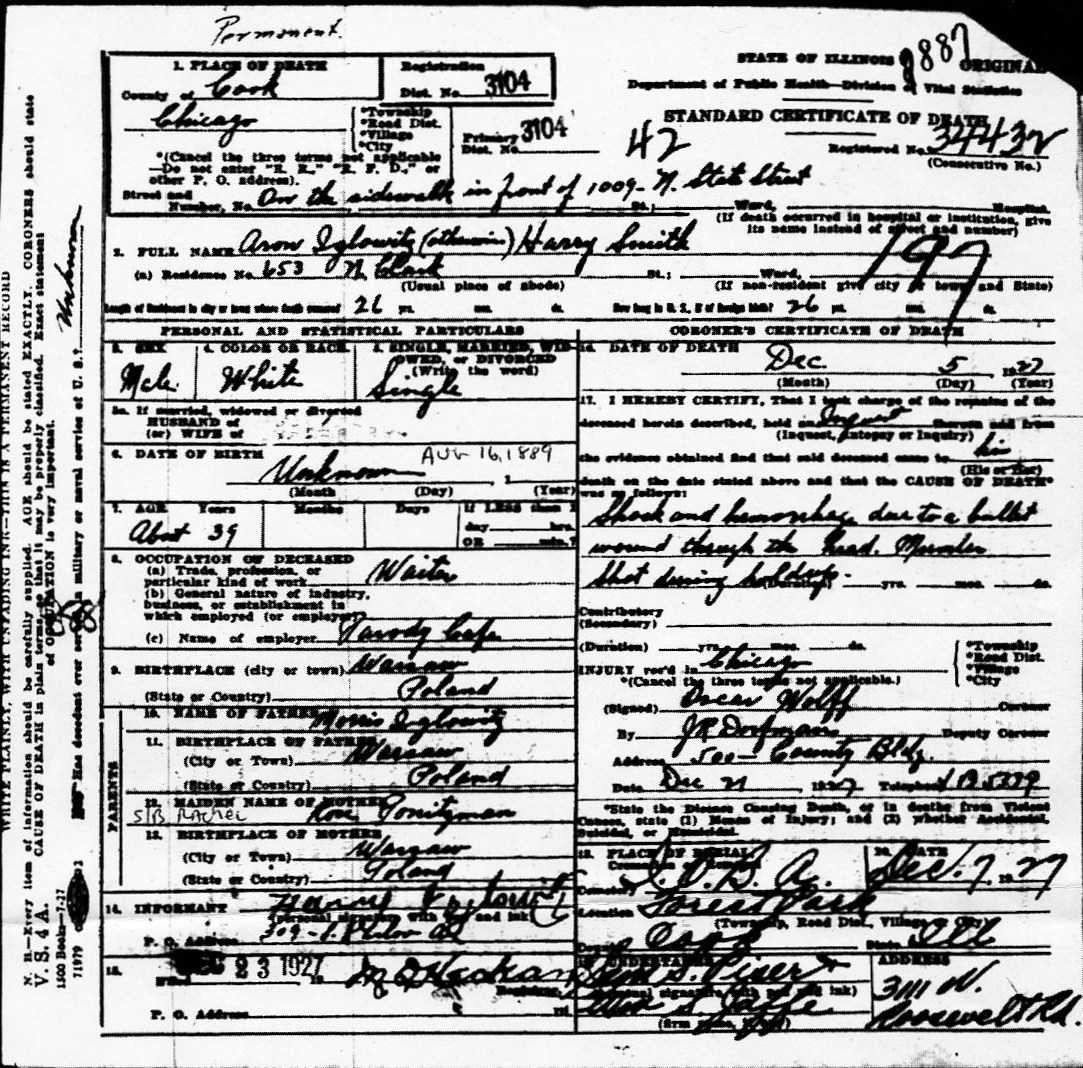 May Aaron Iglowitz rest in peace.
Posted by Jim Craig at 4:58 PM