HE PULLED ILLINOIS OUT OF THE MUD - William Grant Edens

After being educated in the public schools of Indiana, William Edens began his career as a messenger boy for the Western Union Telegraph Company.  He told the census taker in 1940 that the highest grade he completed was the 6th grade of elementary school.  Later, Edens worked as a mail carrier and in railway service, advancing to freight and passenger conductor.  He was the Vice Grandmaster of the Brotherhood of Railroad Trainmen from 1887-1890, and chief clerk and cashier of the same in Galesburg, Illinois from 1890-1896.

It was not all work for William Edens in Galesburg, because he found time to court and marry Lillian Maud Bruner of Galesburg on December 9, 1896 - although the marriage actually took place in Milwaukee, Wisconsin.

It was at this time that Edens began to show some interest in politics - specifically Republican politics.  In 1896 Edens became state organizer for the State Republican League, and later that same year joined the staff of the Republican National Committee under the direction of Marcus A. Hanna.  While working for the Republican National Committee he was elected chairman with supervision of the Organization of Railroad Voters.  It was about this time that Edens met (then) General Charles Gates Dawes of Evanston.  Dawes and Edens worked tirelessly to enable William McKinley to carry Illinois in the election of 1896.

Shortly after that, in 1897 Edens was appointed the Assistant General Superintendent of the free delivery system of the US Post Office Department, a position he held until 1904.

In 1904 he resigned from the Post Office Department to serve in the Republican National campaign of 1904. When Edens' son who was born on March 18, 1903 was named William McKinley Edens, people assumed he was named after President William McKinley who had been assassinated in 1901.  That may have been partially true but the child was also named after William B. McKinley, a congressman and then senator from Illinois.  William Edens was very active in William B. McKinley's successful campaigns, and the two became great personal friends.

In 1905 William Edens started with the main vocation of his life:  he joined the Central Trust Company of Illinois in Chicago at the invitation of General Dawes. 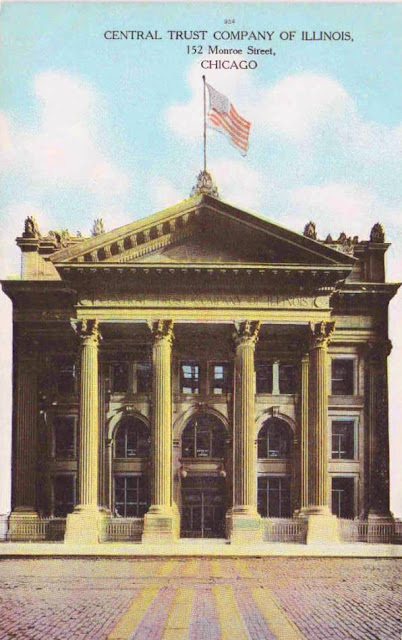 Image courtesy chuckmanchicagonostalgia.files.wordpress.com
It was through his job with the Central Trust Company that he became interested in the greatest avocation of his life:  transportation by good roads.  In 1910 Edens became Chairman of the Good Roads Committee of the Illinois Bankers Association.  His growing interest in good roads led to his being elected President of the Illinois Highway Improvement Association in 1912.  It was during this time that Edens started work on what was to be his greatest accomplishment - a $60 million dollar good roads bond issue for Illinois in 1918.

Edens realized early on that only through good roads could Illinois continue to grow and thrive financially.   When he started his quest in 1912 there were 68,012 automobiles registered in the State of Illinois; by 1918 when the bond issue was adopted there were 389,761 autos registered, a 573% increase in only six years. (in 2012 there were 10.4 million cars registered in Illinois).

On December 22, 1912. the Chicago Daily Tribune published an editorial from William G. Edens that summed up the situation about the roads of Illinois: 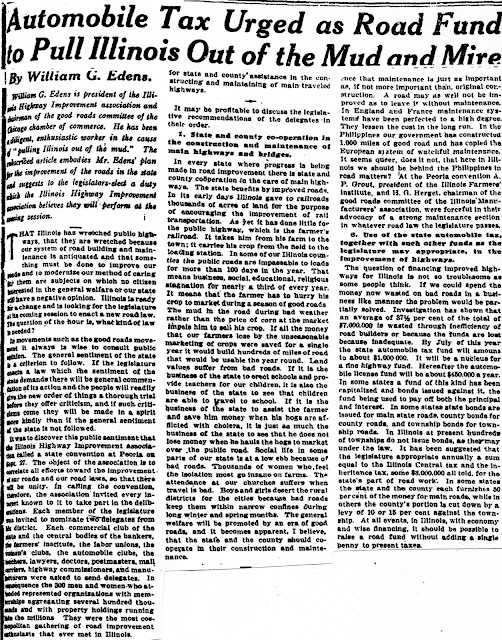 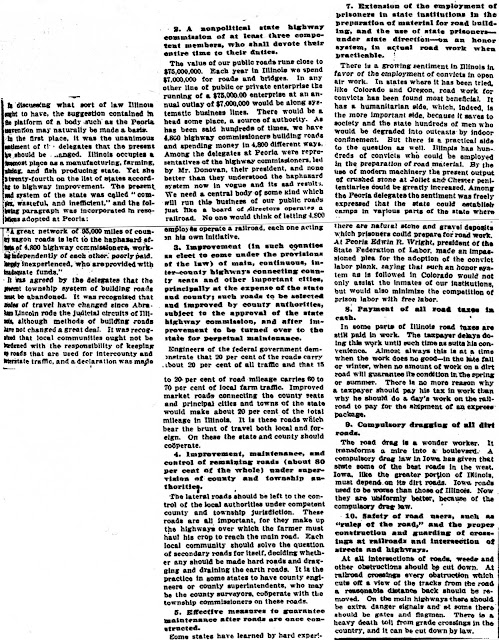 Here's a photo from 1913 of Edens with bankers Miss Alma Miller, unidentified, Harrison Mathewson, and B. C. Getzelman.  Edens is on the far left as you look at the photo. 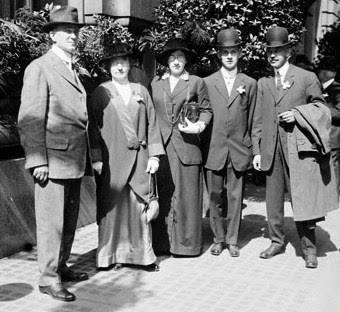 Edens worked tirelessly criss-crossing the state from 1912 to 1918 for the bond issue.  He addressed any group, large or small, who would listen to him.  In 1917, Governor Frank Lowden appointed Edens to the Board of Highway Advisors of Illinois.  Here's a photo of Edens from the time of the bond issue.  He looks like a banker, doesn't he?


Here's an advertisement run in favor of the bond issue from 1918:

The results were in.  On November 6, 1918, it was announced that the bond issue had passed overwhelmingly.  Over 600,000 votes were cast in favor - a plurality of over 450,000 votes.  Illinois would finally be pulled out of the mud.  The decisive victory was even more astounding because the country was still at war, and cost-cutting and frugality for the war effort were the standard for the time.  Edens convinced Illinois voters that it was time for them to invest in Illinois' future - and they did.

William Edens was in the military during World War I.  He was an honorary recruiting officer for the US War Department, but he also served in the 17th Engineers Regiment of the A.E.F. and the 108th Engineers Illinois Division.  It was in recognition of Edens' recruiting efforts during the war that he was awarded the honorary title of "Colonel", a title he proudly used for the rest of his life.

It is not known who actually made the suggestion to name the new north suburban highway after William Edens, but it was voted on and approved by the Cook County Board of Commissioners.  The earliest evidence I could find was a small article from the Chicago Daily Tribune of December 14, 1941: 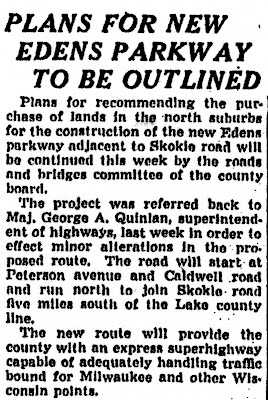 A project the size and scope of the Edens Expressway, which cost over $23,000,000.00 when completed, takes years of planning and review before the first shovel of dirt is turned.  In this case, the route was planned in the 1930s, land acquisition began in 1942, and the first construction contract was let in 1946.

Colonel Edens was the honored guest at the dedication ceremony which took place October 9, 1949 at the grade crossing over Cicero Avenue: 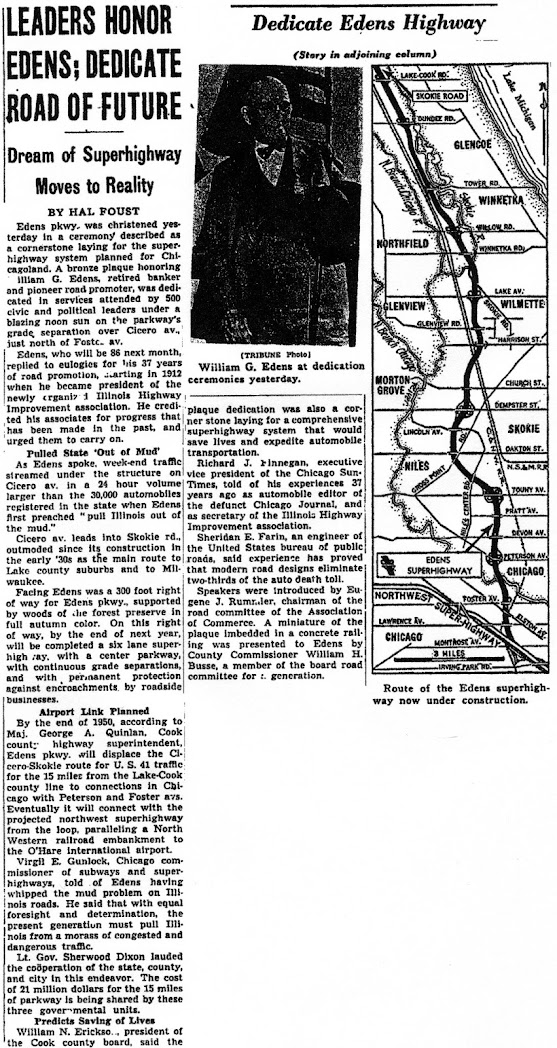 Here's a photo of the building of the Edens Expressway at the Lake Avenue exit in Wilmette.  The bottom middle of the photo is where Edens Plaza Shopping Center is today:


Here is the overpass at Cicero Avenue, a few months before the dedication: 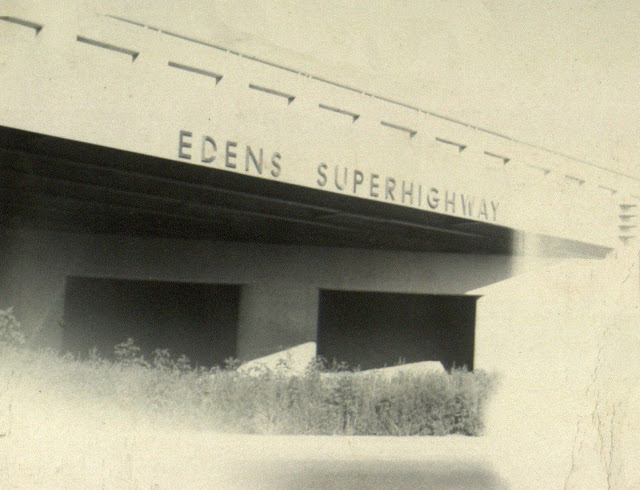 Here is a photo of Col. Edens coming out of his home at 1212 W. North Shore Avenue, Chicago, three weeks before the dedication: 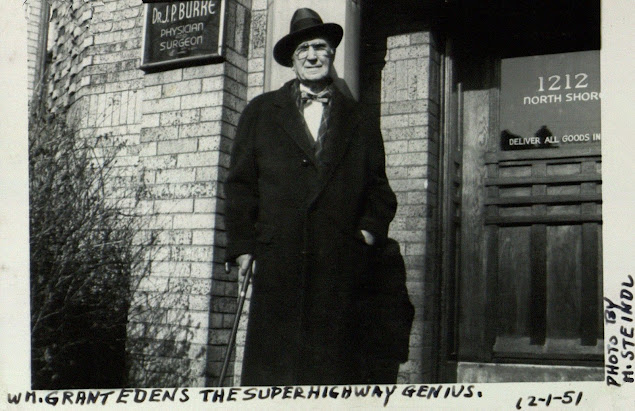 The Edens Superhighway, said to be the "Most beautiful highway in the country when finished", was officially opened on a snowy December 20, 1951.

Here are the officials, one step ahead of the snowplow:


Here is the "official" dedication, after they took partial cover under the overpass:


Here's the Cicero overpass again, this time after the dedication: 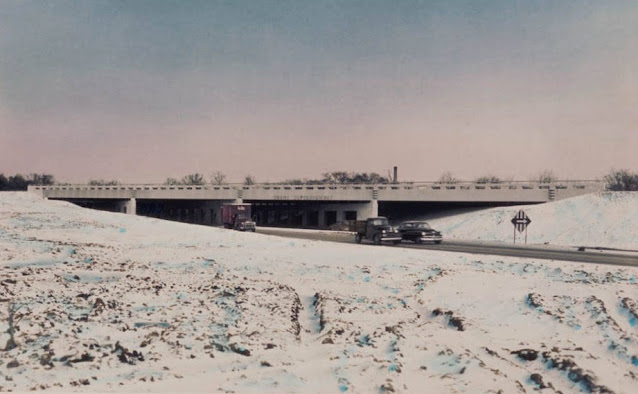 The overpass in 1952.  The "Edens Superhighway" lettering on the overpass is the only known example of this phrasing. 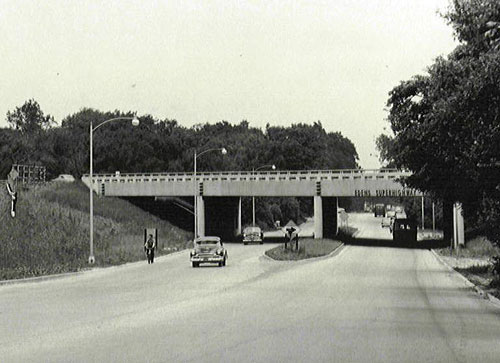 The Cicero overpass today in 2013: 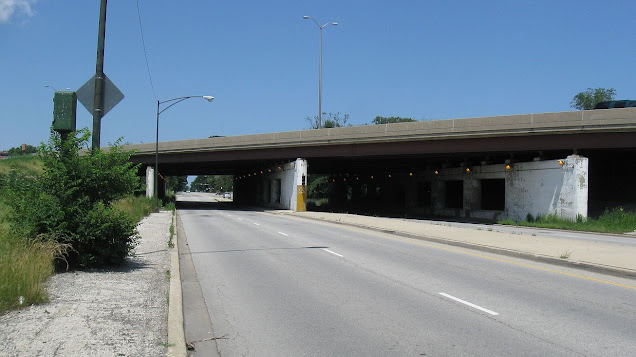 Some views of "The Most Beautiful Highway in the Country": 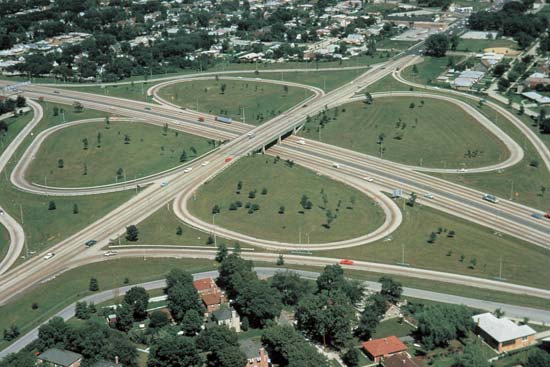 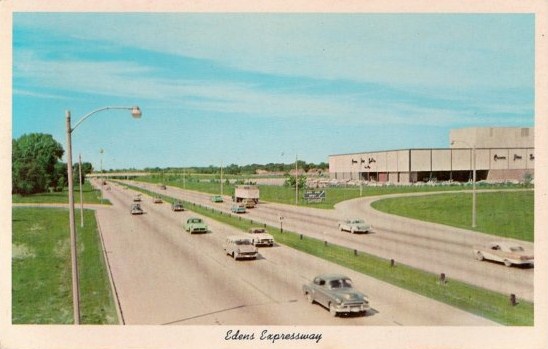 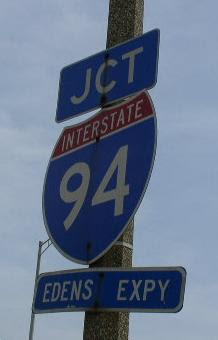 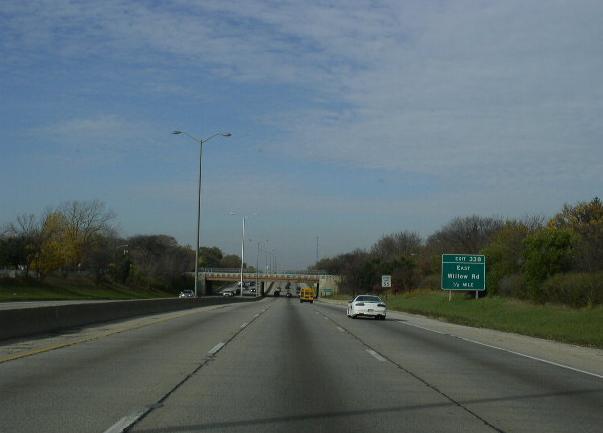 William G. Edens continued to be involved in various civic and fraternal organization activities throughout the 1950s.  Every year on his birthday, he would be remembered by the Chicago Daily Tribune such as this article from November 25, 1955: 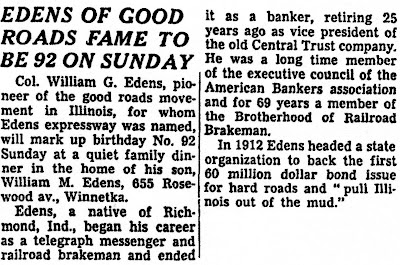 In 1956, his health failing, William Edens moved into the Villa St. Cyril in Highland Park, a retirement/nursing home.

Readers of the Chicago Daily Tribune from November 15, 1957 were greeted with the sad news:

William G. Edens is interred in the mausoleum of Memorial Park Cemetery, in Skokie, Illinois. 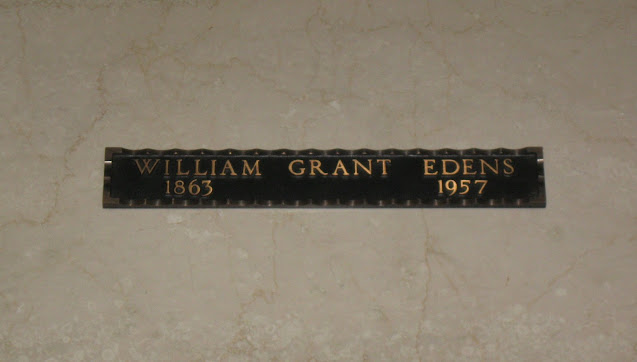 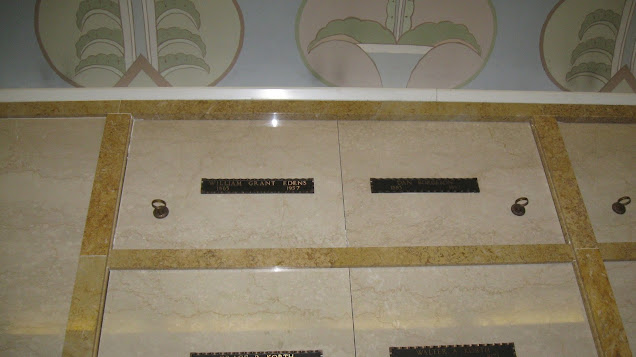 He crypt is just a short distance from the Old Orchard Road exit off the expressway named after him.  Edens wife, Maude Bruner Edens (1876-1968), and his son, William McKinley Edens (1903-1991) are both buried in the Masonic Cemetery in Metropolis, Illinois.
Now that you know the story of Col. William G. Edens, whose lifelong crusade was for good roads for Illinois, I can let you in on a little secret: He never owned a car!

William Grant Edens, tireless advocate for good roads, for whom the Edens Expressway was named - may he rest in peace.
Posted by Jim Craig at 3:13 AM