As I was photographing the impressive monument of Seth Catlin at Rosehill Cemetery in Chicago (see previous post) I spotted another monument that looked interesting - that of George W. Clarke.  Clarke's monument is immediately to the west of Catlin's in Section H.

Unlike Catlin's monument, Clarke's had something carved into all four sides of it.  Here's the front side:

This is what is carved into the front side of the monument:

A Citizen of Chicago

Moving counter-clockwise around the monument, here is the second side:

and here is what is carved on this side: 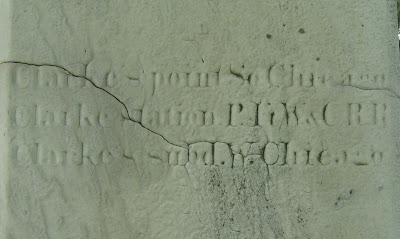 and the next side: 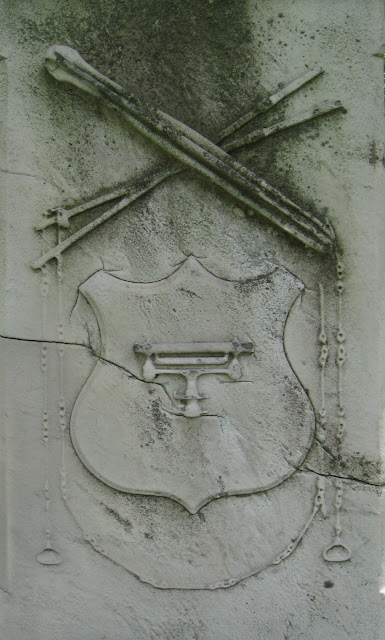 Carved on this side are the tools of a civil engineer

and on the last side: 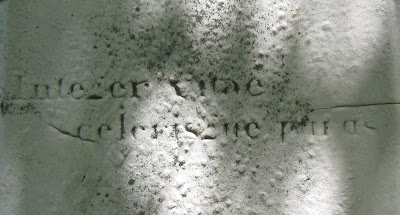 Upright of Life
And Free from Wickedness

What, then, can we find out about George W. Clarke, "A Citizen of Chicago?"

Interestingly, George's brother William married Helen Margaret Catlin (1818-1856) in Vermont in 1838.  Helen does not seem to be a direct relation of Seth Catlin but it would explain why George Clarke's plot is immediately adjacent to Seth Catlin's at Rosehill.

George came to Chicago in 1833 when he was twenty-three and Chicago was not even a city yet.   On August 12, 1833, the Town of Chicago was organized with a population of around 200.  Within seven years it would grow to a population of over 4,000. On June 15, 1835, the first public land sales commenced.  The City of Chicago was incorporated on Saturday, March 4, 1837 and went on to become the fastest growing city in the world for several decades.

As a land agent and surveyor, Clarke was in the right place at the right time.  He knew that as the growth of Chicago exploded there would be a clamoring for honest land agents and surveyors.  Clarke was a believer in the expansion of Chicago to the south, and became one of the earliest investors in Lake County, Indiana, buying up large tracts of undeveloped land in that area.

The Directories of Chicago from the period of 1855-1866 list George W. Clarke as a Land Agent, living and working from the Tremont House hotel in downtown Chicago.

Readers of the Chicago Daily Tribune of Thursday, August 16, 1866 saw the following item:

DIED – George W. Clark (sic), one of the oldest residents of this city, having been identified with Chicago for over thirty years past, and owning considerable property in this city, died last evening of general debility, at the residence of Jacob Forsythe, Esq., No. 434 West Adams street.  The deceased was a bachelor, and about sixty years of age at the time of his death.  He was a native of Pennsylvania, coming from that state in this city.  He was a man who was loved and respected by all who knew him, very retiring in his disposition, and had he been more widely known, he would have been more universally beloved.  His funeral will take place at ten o’clock on Friday morning next, from No. 434 West Adams street.

This follow-up appeared the next day:

The funeral will leave the residence of his brother-in-law, Jacob Forsyth, 474 West Adams street, to-day (Friday) at 12 o’clock, for Rosehill Cemetery, by train.  His friends and the friends of his family are requested to attend without further notice.  Chicago Daily Tribune - Friday August 17, 1866

As with Seth Catlin's death records, the death records of George W. Clarke were lost in the Great Chicago Fire of 1871.  His obituary states that he died from "general debility" which is a broad term for loss of strength in the body.  Clarke was a pioneer and that took its toll on his body.  By age 56 he was just worn out.

George W. Clarke was buried in the seven-year-old Rosehill Cemetery in the plot next to that of Seth Catlin.

Also buried in the plot with George are his sister Harriet Sevilla Clarke who died in 1895: 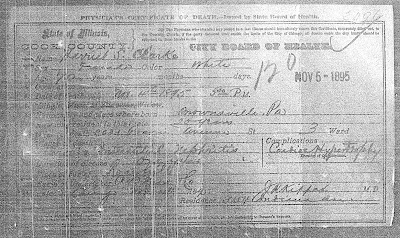 and his sister Sarah Jane Clarke who died in 1905: 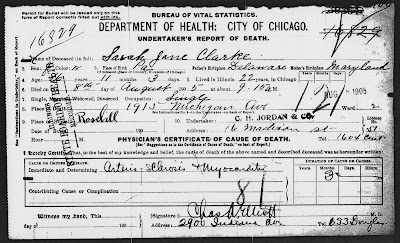 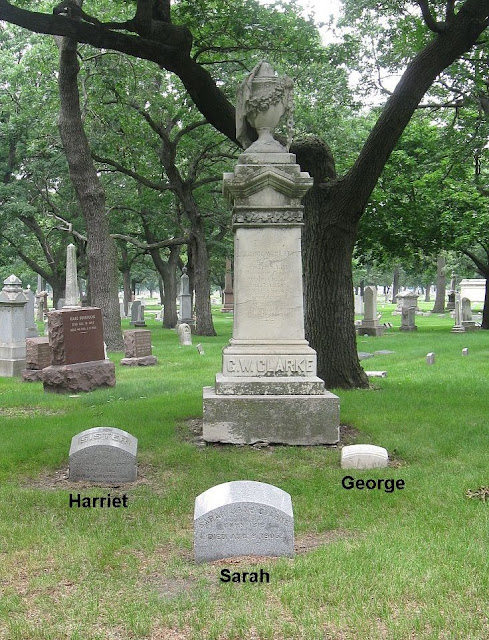 "Upright of Life
And Free from Wickedness"

I think any of us would be satisfied with the same.

George W. Clarke, land agent, civil engineer and Chicago pioneer - May he rest in peace.
Posted by Jim Craig at 3:21 AM