Rosehill Cemetery is full of beautiful old gravestones.  Everywhere you look there are wonderful examples of funerary art.  Some are simple, some elaborate.  Some are familiar designs, many are unique.  The gravestone that goes with this week's story falls into the last category: 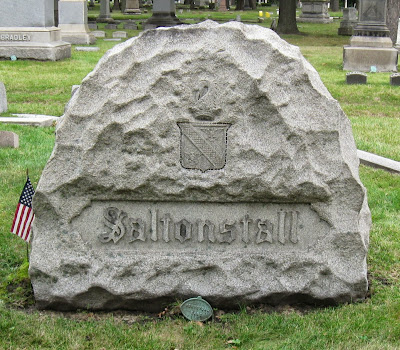 I have noticed the tombstone for years, and had even photographed it long before this blog was ever conceived.  I had considered featuring it in this blog, but had not pursued the research up until now. The other morning as I was lying in bed waiting for the alarm to go off, I suddenly saw this tombstone vividly in front of me and knew that now was the time to feature the stone and the story under it in the blog.  So here it is: the story under the unique tombstone of William Saltonstall and his family.
﻿
William Saltonstall was born in New York City on November 10, 1808 to William Saltonstall (1771-1818) and Maria, nee Hudson (1785-1875). Although William the younger shared his father's name, there is no evidence of his ever being called "Jr.", nor could I find a middle name for either father or son.  Young William had a sister Mary Susan (1804-????) and a brother Henry (1811-1880).  William's father died when he was only ten years old.
The Saltonstall family were blue-bloods for generations.  William's ancestor Sir Richard Saltonstall, after receiving a grant of land from the King of Great Britain, came to Massachusetts and with his two sons established the first church at Watertown, Mass. in 1630.  Another direct ancestor, General Gurdon Saltonstall, made a name for himself in the Revolutionary War under the command of another noted general, George Washington.
From the earliest days in England, the Saltonstall family had been merchants, and they continued this when they came to America. William spent his childhood in Philadelphia where he started his business career by joining the noted cutlery firm of Rogers and Sons, and was sent by them to New Orleans.  After some time there, he left New Orleans, and after settling matters in the east, relocated to Chicago in 1835.  As his ancestors had before him, William established himself as a dry goods merchant, having a store on Lake Street near the Chicago River.  William arrived in Chicago at a time when Chicago had only been a city for two years, and had a population of only 3,000.
In addition to his store in Chicago, William had a contract to supply the garrison at Mackinaw, Michigan, which in those days was a much larger settlement than Chicago.  He often was required to travel from Chicago to Mackinaw or back several times each year no matter what the weather.  In the wintertime, to get from the train station in Detroit to Mackinaw, he had to use snowshoes and sled dogs.  Twice during these years Saltonstall was shipwrecked while travelling by boat, once on the ill-fated steamship Westmoreland.

At 10 a.m. on Dec. 7, 1854, After 18 hours spent battling a blizzard on Lake Michigan, the fate of the Westmoreland was sealed less than three miles from safety.  Rising water in the bilge finally extinguished the fire in the boiler, leaving the cargo-laden steamer powerless and thrown to the mercy of heavy, icy seas off a then-remote stretch of Lake Michigan coastline. 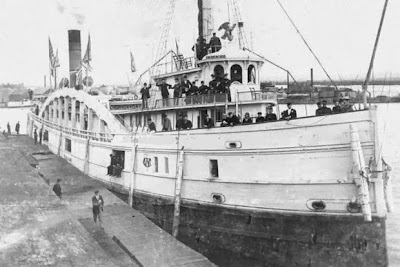 Seventeen of the thirty-three souls on board the Westmoreland would soon perish in the deep, frigid waters of Platte Bay. The other half would spread the legend of a ship reputed to be carrying $100,000 in gold coins in her safe, and 280 barrels of whiskey in her hold, sparking more than a century of treasure hunters that would search in vain for the wreck.  In fact, the wreckage of the Westmoreland was finally discovered in 2010 sitting upright on the lake bed, 200 feet under the surface of Platte Bay near the Sleeping Bear Dunes Lakeshore.  So far, neither the gold nor the whiskey have been found (or so they would have us believe...).

William Saltonstall almost lost his life several times from the extreme cold he encountered.  He gave the credit for his surviving to a waterproof matchbox he always carried.  He said that often his ability to start a fire was the difference between his surviving, or perishing from the cold.

After the Civil War, William Saltonstall gradually closed down his retail ventures.  I guess he was getting too old for the arduous journeys, although the transportation system was getting better every year.  He spent his latter years solely in Chicago, eventually becoming the bankruptcy trustee for the Chicago District.

William Saltonstall died Friday, August 13, 1886 from "Pressure of the brain with apoplectic symptoms."  Here's his obituary from the Chicago Daily Tribune of August 16, 1886:

As I mentioned above, William Saltonstall is buried in Rosehill Cemetery, Chicago: 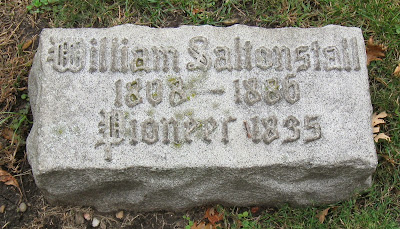 
and also their daughter Gertrude who died at the age of seven:


Here's a photo of the Saltonstall plot at Rosehill: 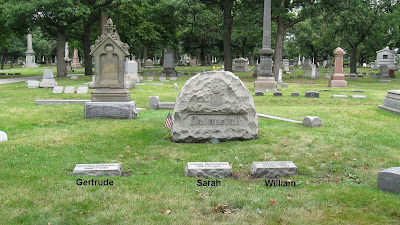 On the beautiful monument you can see the Saltonstall family coat of arms: 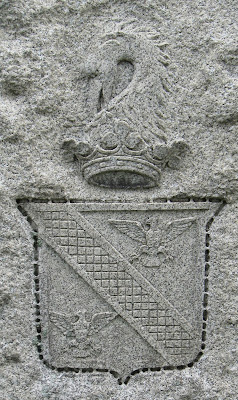 You can see that it has been Americanized (simplified) somewhat from the original British coat of arms of the Saltonstall Family: 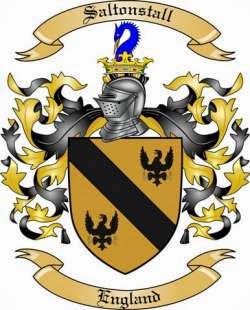 William Saltonstall, Chicago pioneer - may he rest in peace.
Posted by Jim Craig at 3:50 AM