THIS ONE WILL BREAK YOUR HEART - Joseph Sabatka, Jr.

Anyone who is a frequent reader of this blog know that I am very soft-hearted, especially when it comes to children and dogs.  So you can imagine how I felt when I was surfing the net recently and came upon the following ceramic grave photo:
Since this was on a grave at Bohemian National Cemetery in Chicago I thought I'd take a drive over there and see it for myself.  And here it is, hidden all the way back in Section 5, Lot 58: 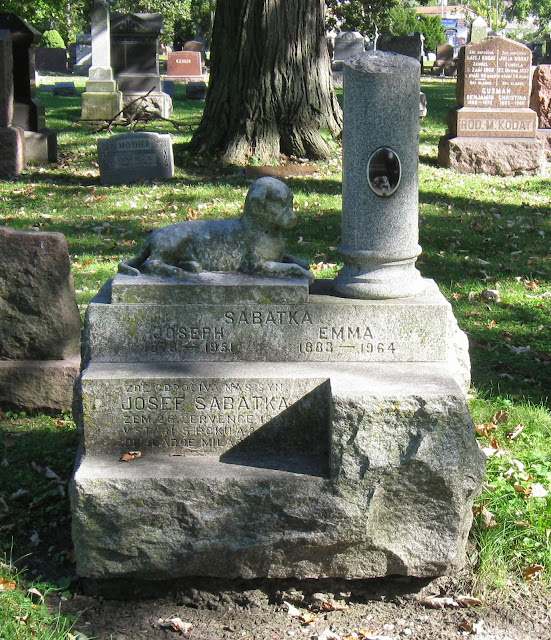 This is obviously the grave of young Josef Sabatka, along with his father Joseph and his mother Emma. According to the office at Bohemian National there are other members of the Sabatka family buried in the plot, but they are not named on the tombstone.
The part of the stone about young Josef says the following:
Zde odpociva nas syn
JOSEF SABATKA
Zem 26 Cervence 1913
V stari 5 roku a 2 mes
Spi sladce milacku nasi
With a little help from Google Translate, here it is in English:
Here rests our son
JOSEPH SABATKA
Died 26 July 1913
At an age of 5 years and 2 months
Sleep tight our darling.

Joseph listed his profession as "Proprietor of a Saloon".  In addition to Joseph and Emma, there were their children Emma, Herman and Joseph, and in-laws Anna Vaca, Joseph Valvoda, Anna Vaca and William Vaca.
Young Joseph died on July 26, 1913 of peritonitis due to a ruptured appendix - the very same thing that would take the life of silent film star Rudolph Valentino thirteen years later. 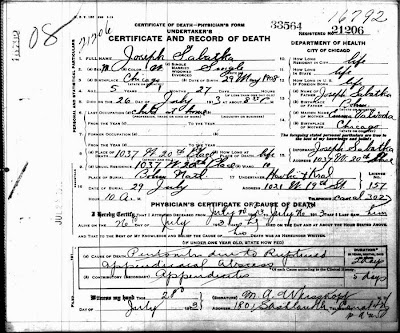 Joseph was just shy of five years and two months old.  His family purchased a plot at Bohemian National Cemetery on Pulaski Road in Chicago, and he was buried there three days later on July 29, 1913.
It's not known who produced the beautiful tombstone of a boy and his dog, but it is a work of art.  As I have mentioned in previous articles, the broken column signifies a life cut short.  We also don't know how long Joseph's dog lived after his death, but as we saw with Valentino and his dog Kabar, it is not unusual for a dog to die from a broken heart after losing their master.  We all know of stories even today, of dogs who will not leave their master's casket at the funeral home, or their grave in the cemetery.  For Joseph's dog to be featured so prominently on his tombstone, he must have been a big part of Joseph's life.  The sculpture of the dog is worn with age, but he still stands watch over the grave of his young master 100 years later. 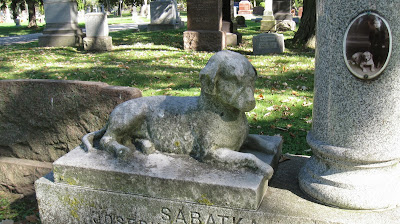 What became of the rest of the Sabatka family?  Little Joseph's father, Joseph Sabatka, Sr. died in  1951.  Both of his sisters, Emma/Emily (Rudolph Pape) and Eveline/Evelyn (Norman Larsen) went on to marry and have families of their own.

Herman Sabatka also married (Marie Sebesta).  He went on to have a long and successful career with the Cicero, Illinois Police Department before failing health forced him to retire early.  He died in Los Angeles, California in 1953. 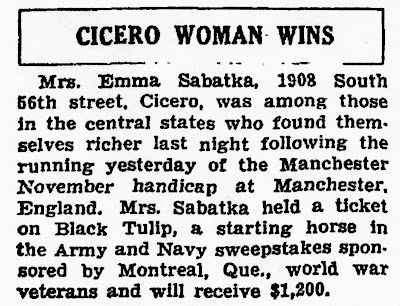 Emma/Emilie Valvoda Sabatka died in 1964.  Here's her obituary from the Chicago Daily Tribune of December 5, 1964:


So that's the story of a tombstone that features a boy and his dog, that, through the artistry of a unknown sculptor, still steals our hearts over 100 years after it was placed on the little boy's grave.

May Josef Sabatka and his four-legged pal rest in peace.
Posted by Jim Craig at 3:30 AM