This sad story takes us all the way to Hollywood, California:

For years I have been fascinated by the life and career of silent film star Rudolph Valentino.  In my studies about Valentino I would occasionally come across the story that Valentino used to go to the Hollywood Cemetery  to leave flowers at the crypt of a little girl he knew who had died tragically.  Further research showed that this little girl was Virginia Richdale Kerrigan, the daughter of William W. Kerrigan.  Kerrigan was the general manager of Universal Studios and the twin brother of silent film star J.W. Kerrigan.

Early in his career Valentino made movies at Universal and became captivated by the charming little girl who used to spend time at "Daddy's Studio".  Valentino loved children and one of his greatest regrets was that both of his marriages were childless.  Over time, Valentino became very close to little Virginia, and even as he became famous he still found time to take his little friend for rides in his fancy cars through the Hollywood Hills.

On the day after Christmas, 1924 Virginia and her family attended a party at a neighbor's house at 2006 Ivar Avenue in Hollywood.  It was chilly that day, as it can sometimes get in Hollywood in late December.  To take the chill out of the air, someone lit an open gas heater.  Virginia had received a new dress for Christmas and was modelling it for the partygoers.  Shortly before noon, as she laughed and twirled around the room, her dress came in contact with the gas heater and caught fire.  The flames spread rapidly to the upper part of her clothing and to her hair.  Before anyone could extinguish the flames, Virginia was badly burned around the arms, body and head.  An ambulance was called and rushed Virginia to the nearest hospital, which was Stadfield Hospital on Sunset Boulevard.  Virginia's burns were too severe, and shortly afterward she was transferred to the Hollywood Community Hospital.  Virginia fought valiantly, but the burns were too much for her little body, and she died on Saturday night, December 27, 1924.

The funeral services were held at the home of Virginia's famous uncle, J. Warren Kerrigan.  From there her body was taken to the Cathedral Mausoleum at Hollywood Memorial Park Cemetery (now Hollywood Forever Cemetery) on Santa Monica Boulevard.  Virginia was laid to rest in crypt 1399.

Virginia's family relates that Rudolph Valentino was devistated by the death of his little friend Virginia, and would often visit and leave flowers at her crypt at Hollywood Memorial.

As fate would have it, less than two years later Rudolph Valentino was himself interred in the Cathedral Mausoleum, in crypt 1205, after his tragic death in New York on August 23rd, 1926.  Valentino rests just two aisles over from his little pal Virginia.

Let us stop and say a prayer for Virginia and her family this Christmas - they are not forgotten. 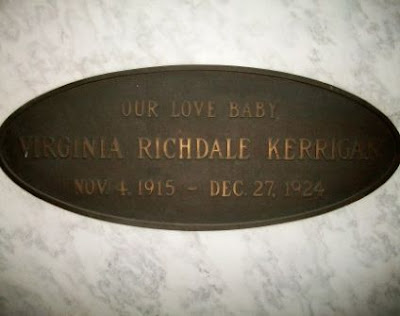