It is never a good sign when you see a tombstone where more than one person shares the same date of death.  You can be sure that something bad must have happened.  So when I saw the tombstone of  Joseph and Sarah Dorf and noticed that they both died the same day - February 12, 1928 - I knew that I would find a sad story there - and that was exactly what I found:

BRIDE TRIES TO SAVE MATE AT FIRE; BOTH DIE

Flames sweeping through a home in which a Valentine party had been held only a few hours previously early yesterday took the lives of a newly married couple, the bride perishing in a vain attempt to rescue her husband.   They were Joseph Dorf, 28 years old, and his wife, Sarah, 28, of 4747 Grace Street.

With several friends and relatives the Dorfs had attended the party in the bungalow of Raymond Burke, 6078 Newburg Avenue, Norwood Park.  The party lasted until 1 o’clock when it was decided it would be too late for the guests to return home.  Dorf and his wife were given a room on the second floor.

Soon after all had retired other members of the household were awakened by the screams of Mrs. Dorf as she fled down the stairs.  Burke ran to the room and found it a mass of flames.

Then, despite the efforts of others to hold her back, Mrs. Dorf rushed back into the wall of fire.  Her body was found beside that of her husband, whom she tried to save.
Police believe that Dorf fell asleep with a lighted cigarette in his hand, which fell and ignited the bed clothing.
Chicago Daily Tribune – February 13, 1928

The graves of Joseph and Sarah Dorf, together in death as they were in life, can be found at Jewish Waldheim Cemetery in Forest Park, Gate 109 - Ostrower #1.  May they rest in peace. 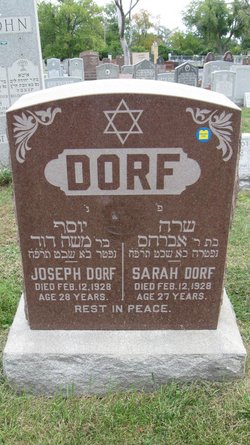