Francis Malone was born January 17, 1760 in Lancaster, Pennsylvania. The Malones were originally from County Westmeath in Ireland and one of Francis' ancestors was The Right Honorable Anthony Malone, Member of Parliament from Baronston in Ireland and Chancellor of the Exchequer.  The first Malone to emigrate was Francis' grandfather Edmund who came to the Colonies in the early 1700s.  Francis was 16 years old when the Declaration of Independence was signed in Philadelphia and he volunteered for the Pennsylvania Militia in April of 1777.  Because of his youth and familiarity with the area, Captain William Morrow assigned Francis to spy on the Indians, who were allies of the British in the Revolutionary War.  Francis would sneak into the woods, and after finding the Indian encampments would report the information back to his commanding officers.

In 1788 Francis married Elizabeth Rogers, and about 1800 Francis and his family went west, eventually locating in Helt Township, Vermillion County, Indiana.  Francis farmed the rich Indiana soil, and he and Elizabeth raised four children:  Rebecca, William, Samuel and Martha. In 1833 Francis was granted a US Government pension in recognition of his service in the War of Independence.  He died in Helt Township in 1841 at the age of 81.

It was known that Francis was buried in the Helts Prairie Cemetery in Hillsdale, Indiana, but over time the exact location of his grave, along with any grave marker, was lost.  In 2004, the William Henry Harrison Chapter of the Sons of the American Revolution in recognition of his service made arrangements to have a new marker made for Francis Malone, and had it installed next to the flagpole in the Helts Prairie Cemetery.

I am especially proud of the contribution that Francis Malone made to the founding of our nation, because he was my 4th Great-Grandfather.

May Francis Malone, and all of our patriots, rest in peace. 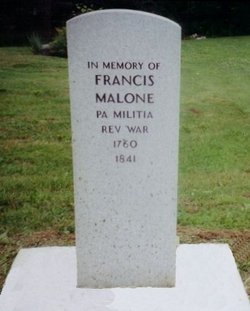 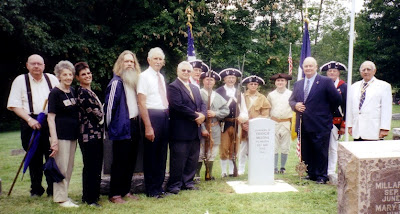 Group picture after the memorial dedication and memorial service in Vermillion County.
Posted by Jim Craig at 1:58 PM