I have mentioned before on this blog that it is truly a pleasure for me to be able to photograph graves for people who do not live in the Chicago area.  Just today I received the following email:
"Jim, I just had to thank you again for your photographs with the up-close portrait picture of Bessie Sanders that you did a while ago.
I was at a family gathering today and two of Bessie's grandchildren (one 82 yrs. old) were in tears seeing the Memorial page with grave and the enlarged portrait.  So thank you once again for your kindness. Sue"
I have also mentioned that it has been a privilege for me to be able to supply some Chicago grave photos for someone who lives in Yerushalayim (Jerusalem).  Just the thought of the Holy City moves me, and to have a connection with someone who lives there is truly a blessing.  So, when I received the following email from my Jerusalem connection I set to work right away:
"Did I ask you before, Jim, if you could perhaps try to find Meyer Rolnick's grave?
Let me attach for you his story as I have written it.
A really interesting fellow and family."
Here are my clues from the Rolnick family saga:
"The Columbia Evening Missourian reports a 1920 visit by Meyer and Mollie (Rolnick) to (daughter) Grace in Columbia and, in 1921, a visit by Grace to “meet her parents, Mr. and Mrs. M. Rolnick, of Oklahoma City, Okla., who are going to New York City. Miss Rolnik will return to Columbia Monday.” But a year or two later, Meyer died of a heart attack in Chicago. “The story is that he was running for a trolley….."
Before we go any further with our investigation, let's take a look at the interesting story of Myer (Meyer) Rolnick:
Meyer Rolnick, who had emigrated in 1882 at 18 years of age from the Kurland, now Latvia, had got his citizenship in Tennessee.  He was a travelling salesman who started life as a young peddler and taught himself English by studying a Hebrew-English translation of the Torah.  First Meyer walked with a pack on his back, then he got a horse (or maybe donkey), and then a wagon.  He moved west and entered the Oklahoma Territory when it was Indian Territory, before white settlers were permitted.  In the 1900 Census he is listed as living in Mangum, Greer County, in the South-Western tip of the Territory of Oklahoma with his occupation as “Salesman of dry goods”.  Meyer's granddaughter writes that Meyer was “highly loved and respected by everyone and made lasting friends wherever he went”, but it must have been a lonely life for him, a single man and a foreigner in this wide Territory. But things were soon to take a turn for the better.
Philip Slaner, born Solnicki (Selinsky) in Vishay, Lithuania, had arrived in Texas in 1883, aged 17. By 1894, he had lived for fifteen years in Texas, and was established as the proprietor of a clothing store in Fort Worth, Texas (at 1017 Main St.). The news of great opportunities with the opening of the Oklahoma lands must have stirred him when, between July 29th and August 5th of 1901, the Wichita-Caddo, Comanche, Kiowa and Apache tribal lands were divided up in a land lottery. The 6,500 winners (chosen from 170,000 applicants) were given title to their 160 acre plots, and the Kiowa, Caddo, and Comanche Counties were added to Oklahoma Territory. Phillip had travelled some 200 miles north and, on August 6th, he opened his store in Hobart in Kiowa County, Oklahoma. Luckily for Meyer, Hobart was only 30 miles away from Mangum where, as we saw, Meyer had been living.  Phillip’s sister Mollie, who had arrived in the USA a few years before, traveled with Phillip. Meyer’s granddaughter writes: “Mollie was quite beautiful and well educated in Torah, Talmud and the Commentaries, as there was a school on the family property in Vishay for traveling students.  She, of course, could not go into (the school) but she stayed by the window and learned as best she could.  Meyer was much taken by her.  He was much older and by then successful.  He spoiled her even more than she already was.  They were married in 1905 in Dallas at the home of Conrad Hilton (who later began the hotel dynasty) his good friend.
They went on honeymoon somewhere in the West (I just love this photo!): 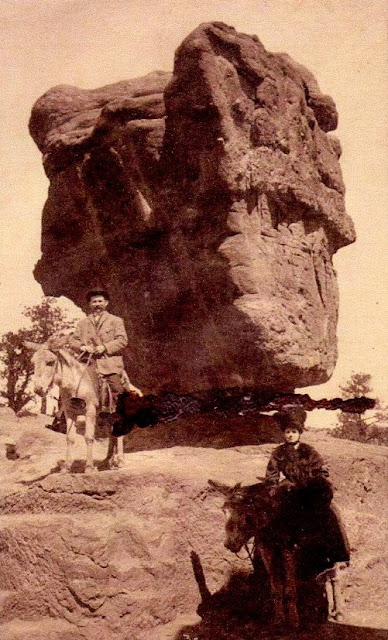 The following year, their daughter Grace was born, in Hobart. Meanwhile, Phillip’s brothers, Louis and Jacob (who also took on the name Slaner, from their Solnicki) had arrived in the USA, Louis in 1900, Jacob in 1905. Louis soon set himself up working with Phillip and William Flaxman in a Dixie Department Store in Mountain View, but Jacob stayed with Phillip in the store in Hobart (and would remain with the store for another fifty years).
Meyer had done well financially but was looking around for further business opportunities. The Santa Fe Railroad was building a transcontinental line, planned to go through the newly developing ranch and farm area of Eastern New Mexico. The railway engineers, ordered in 1906 to choose a town site, settled on a spot just northwest of an existing rail switch, known as Riley Switch. The town was renamed Clovis by the station master's daughter, who at the time was studying about Clovis, the first Catholic king of the Franks. Meyer felt that what was needed in the new town was a bank and, with four other founders, met in Melrose, New Mexico on May 29, 1907 to organize the Clovis National Bank with a capital of $25,000 (about $1,000,000 in today's money). By December of that year, the bank already had resources of over $65,000 of which $32,000 were deposits by individuals, and they had $26,000 out on loan.
Meyer and his family moved down to Clovis where, in August of 1908, they hosted Mollie’s 65 year old widowed mother Chaya Solnicki and her brother Jacob (Slaner). Their brother Phillip had travelled to their home town of Vishay in Lithuania to fetch Chaya, who came to the USA together with three 11 year old boys, one of them a grandson. Four of Chaya’s children were now living in America and the plan was for her to move permanently to the USA.  But, delighted as she was to see her new grandchild, Grace, she found the new country to be too strange, without the Jewish atmosphere and the kosher food that she was used to, and she returned to Vishay.
Meanwhile, things had not been easy for the Rolnicks down in Clovis. Meyer’s National Bank of Clovis failed in the oil-related financial panic of 1911. But because of his good reputation he had no trouble getting advances from his old suppliers and he went back into business in Oklahoma, opening up a dry goods store in Carnegie, Oklahoma.   Marcia Burnham writes: “It took Myer years to pay back all his depositors, but he did”.
Mollie’s cousin on her mother’s side, Abraham Grad, had arrived in September of 1911, his fare paid by his uncle Phillip. Abraham went to work in Meyer’s store in Carnegie and stayed there for many years.  Mollie’s nephew Irwin Chason also went to work in Meyer’s store.  So Meyer was employing a nephew from each side of Mollie’s family, one a Grad and the other a young man from her Solnicki side. Abraham’s younger brother, Frank Grad, and Frank’s wife Rose arrived in Hobart in 1922 with their son Charles. Frank started his life in Oklahoma by also working in Meyer’s store.  Indeed, Meyer was surrounded, happily one is sure, by Solnickis and Grads.  His own Rolnick family was far away in Chicago and Baltimore, but there is one historic photograph of a meeting, probably in Chicago and taken before Louis Rolnick’s death in 1906, of seven of the children of Berl Rolnik:

Marcia Garbus Burnham writes: “(Meyer) was always active in politics and became the first Republican State Committeeman from Oklahoma (i.e. head of the state party). My mother (Grace Rolnick)'s favorite story was that he was invited to join the Klu Klux Klan, the most virulent anti-negro, Catholic or Jewish group in our history. ….. He told them that it was a greatest honor he could imagine and that he loved each member like a brother but that he didn't think it was a good idea considering everything. …. One of his many charities was to give the widows who lived on the little farms of the region cloth, needles and thread. They could do whatever they wished (with) it...make clothing for their families etc. If they made quilts, he would buy them for cash as they had no other way of ever having any cash at that time. We had quite a collection of quilts. My children have some.”
By 1920, with their daughter Grace at school, the family moved to the big town, Oklahoma City. Interestingly, Meyer is recorded twice in the Census of that year. On the 16th January, a Friday, he is in Carnegie, a lodger with a private family, the Dauberts. On the “17-19” January, by the weekend, he is 100 miles away in Oklahoma City with Mollie and Grace, at 427 East 14 St. It seems that he spent part of the week helping Abraham Grad to run the store, but was back in Oklahoma City for the weekends. Soon after, Grace was sent to school at Stephen’s College, Colombia, Missouri.
This brings us back to our original clues:  The Columbia Evening Missourian reports a 1920 visit by Meyer and Mollie to Grace in Columbia and, in 1921, a visit by Grace to “meet her parents, Mr. and Mrs. M. Rolnick, of Oklahoma City, Okla., who are going to New York City. Miss Rolnik will return to Columbia Monday.” But a year or two later, Meyer died of a heart attack in Chicago. “The story is that he was running for a trolley…"
We know that Meyer died:
1.  In Chicago
2.  After 1921 (based on the quote above)
3.  Before 1925 (based on the fact that Meyer's daughter Grace married Morton Garbus in November of 1925.  Their marriage certificate is signed by Joseph Garbus, Morton’s father but by Jacob Slaner, Grace’s uncle, since her father, Meyer, had of course died some years before).
The easiest way to find Meyer's burial site is to look at his death certificate.  Based on the above clues I checked all the online death indices but could not find Meyer's death listed anywhere.
I checked Family Search, the Illinois Statewide Death Index and Cook County Genealogy Online - nothing.
At the same time this request came in, I made one of my frequent trips to Jewish Waldheim Cemetery.  I stopped in at the office to see if they had any record of Meyer.  And unlike the Chaia Vision saga (see previous post) the nice women at the desk said "Yes, he's here - he died in September of 1924."  She went on to say that Meyer's grave was located at Gate 24 (B'nai Israel), Lot 33, Row 15, Grave 3.  So, off I went to meet Meyer Rolnick - and here he is: 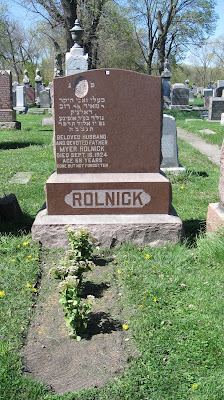 Meyer is buried next to Jack Rolnick, 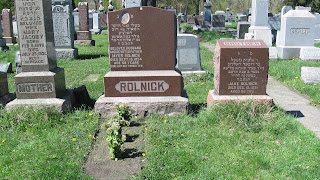 and just a few rows up from Michael Rolnick and his wife Jennie, and Max Rolnick: 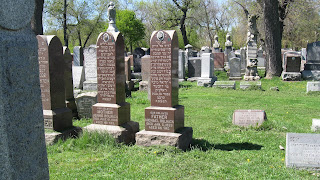 So even though Meyer died a long way from home, he was laid to rest in the bosom of his family.
As the description of this blog says "There is a story under every stone."  We don't usually have as much of the story as we do with Meyer Rolnick, but due to the diligence of his relatives, we know not only about Meyer and his wife, but also his siblings and forebears.
May Meyer Rolnick, immigrant, peddler, banker, and department store magnate, rest in peace.
(The Rolnick family saga, and all photos except the grave photos, are used with permission of the Rolnick Family.)
Posted by Jim Craig at 5:11 PM