On yet another Find a Grave photo trip to Rosehill Cemetery in Chicago I was walking the rows of graves in Section 103 when I saw the following footstone:


"Dorothy - Sweet Sixteen" was all it said.  I looked up and saw an impressive family monument with more details. 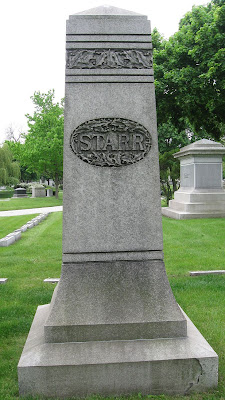 The 1910 census was taken as of April, 1910 so luckily we can find Dorothy still alive at that time.  Dorothy lived at 6059 South Monroe Street in Chicago.  Most Chicagoans of today's vintage are used to Monroe as an east-west street that starts in Chicago's Loop but in 1910 there was also a Monroe street that ran north and south from 5300 South to 9000 South on Chicago's South Side.  The north-south Monroe street was later changed to Kenwood Avenue.  6059 S. Kenwood is now an industrial building, but 100 years ago this was a very fashionable neighborhood of big old homes.

Dorothy lived with her father Arthur, a real estate agent, mother Florence, and her brothers 26 year old Leon and 18 year old James.  Dorothy was 16 when the census was taken.  The Starr family was well-off enough to have a servant, 19 year old Lillian Bethke.

What happened ﻿on August 15, 1910 in Onekama Township, Manistee County, Michigan?  We will probably never know the whole story but the death certificate says that the cause of Dorothy's death was "accidentally drowned in Lake Michigan near Portage Point."

The death of Dorothy Starr reminded me of the tragic death of 20 year old Meyer Iglowitz who drowned in Michigan during an outing with friends August 18, 1913 and whose story I have previously told on this blog:

Being the only girl in the family, with two older brothers, I am sure that Dorothy was the "pet" of the Starr Family.  Not only was she the only girl, as the youngest she was "The Baby" as well.  It goes without saying that all were devistated by her death.

Dorothy had turned 16 on February 10, 1910.  We don't know for sure, but it is very possible that her loving family threw a "Sweet Sixteen" party for her when she reached that "magic" age.  It is all speculation on my part, but perhaps while they were trying to deal with the fact that their Dorothy was dead that someone said "I'll never forget her at her Sweet Sixteen party - she never looked lovelier and she was never happier."  It's just a small step then to imagine that one of them (perhaps a big brother) said, "That's how I want to remember her.  Let's put that on her tombstone:  Dorothy - Sweet Sixteen."

Leon was one of Dorothy's big brothers.  Leon "went West" and ended up living in Colorado.  In May of 1916 he married Anna Burgess in Canon City, Colorado.  Then the war came along - the one that used to be called "The Great War".  Leon was too old to be drafted - in 1917 he was 33 years old.  But a sense of duty called and he enlisted in the First Regiment, Colorado Infantry.  The Chicago Tribune obituary from April 6, 1917 tells the rest of the sad story:

STARR - Leon P. Starr, son of Mr. and Mrs. A.P. Starr of 6059 Kenwood Av., Chicago, April 4, at Denver, Colorado, of meningitis contacted in camp of the First Regiment, Colorado Infantry.  Graduate of the University of Chicago in the Class of 1908.  Member of the Lincoln House.
Chicago Daily Tribune - April 6, 1917.

Does it say "died of a broken heart" on his death certificate?  It might as well have.

James Ralph Starr, Dorothy's other big brother, died in in Los Angeles, California on December 20, 1960 at the age of 69.

Florence Murray Starr, mother of Dorothy, Leon and J. Ralph, and wife of Arthur, had to wait a long time to be reunited with her family.  She outlived all of them and did not die until November 5, 1962 at the age of 101!

May they rest in peace.
Posted by Jim Craig at 5:51 PM