I have mentioned before that I enjoy just wandering around Chicago's historic Rosehill Cemetery.  I have been to Rosehill literally hundreds of times through the years, yet it seems that every time I go there I find something new - at least new to me.  This happened not too long ago when I was wandering around Section H and I, two of the older sections of the cemetery.  Out of the corner of my eye I saw what looked like an interesting tombstone, and it was: 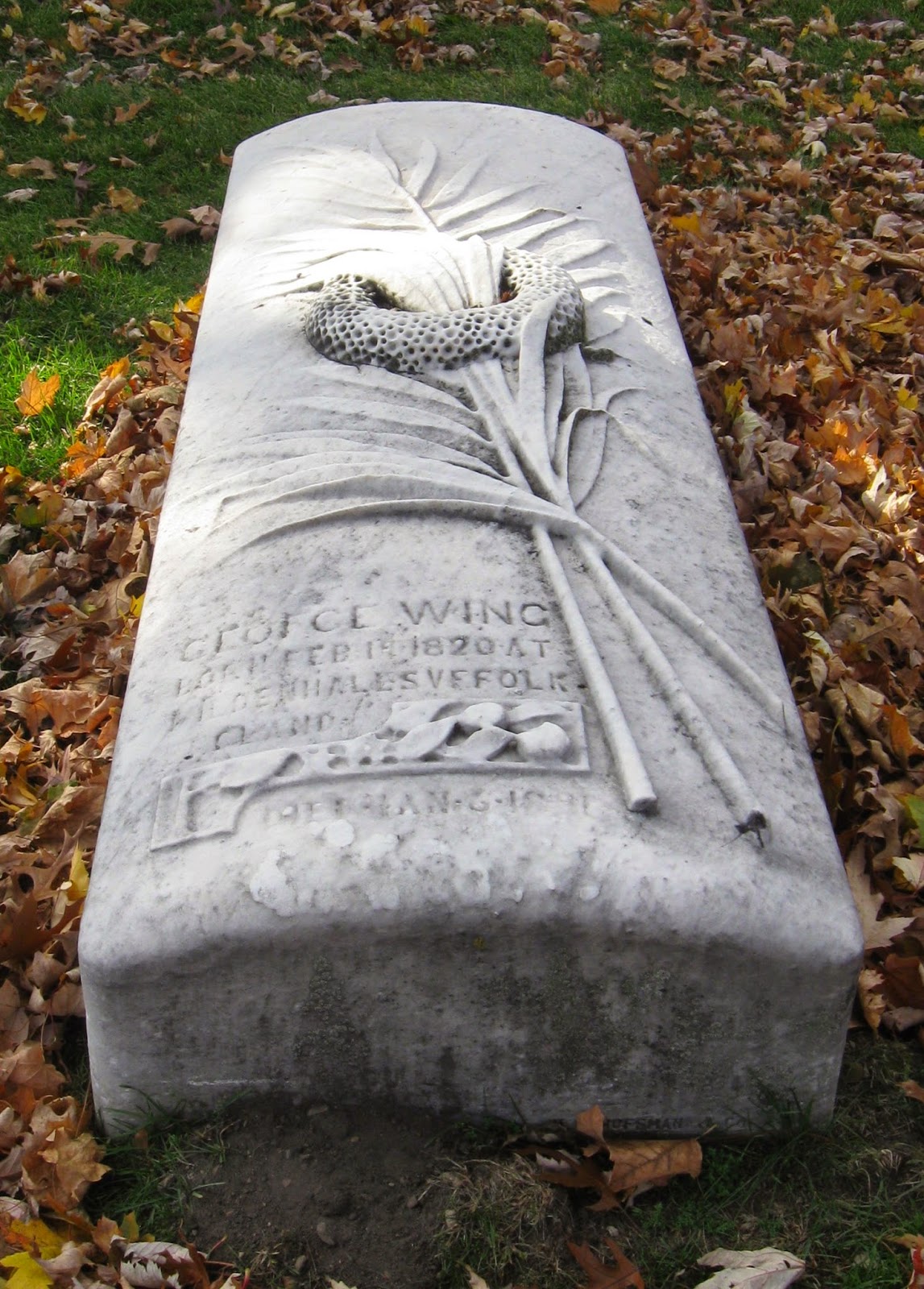 This beautiful white stone marks the grave of George Wing.  Before we take a closer look at the tombstone, let's see what we can "dig up" about George Wing.

As it says on his tombstone, George Wing was born Feb. 19, 1820, at Mildenhall, Suffolk, England. 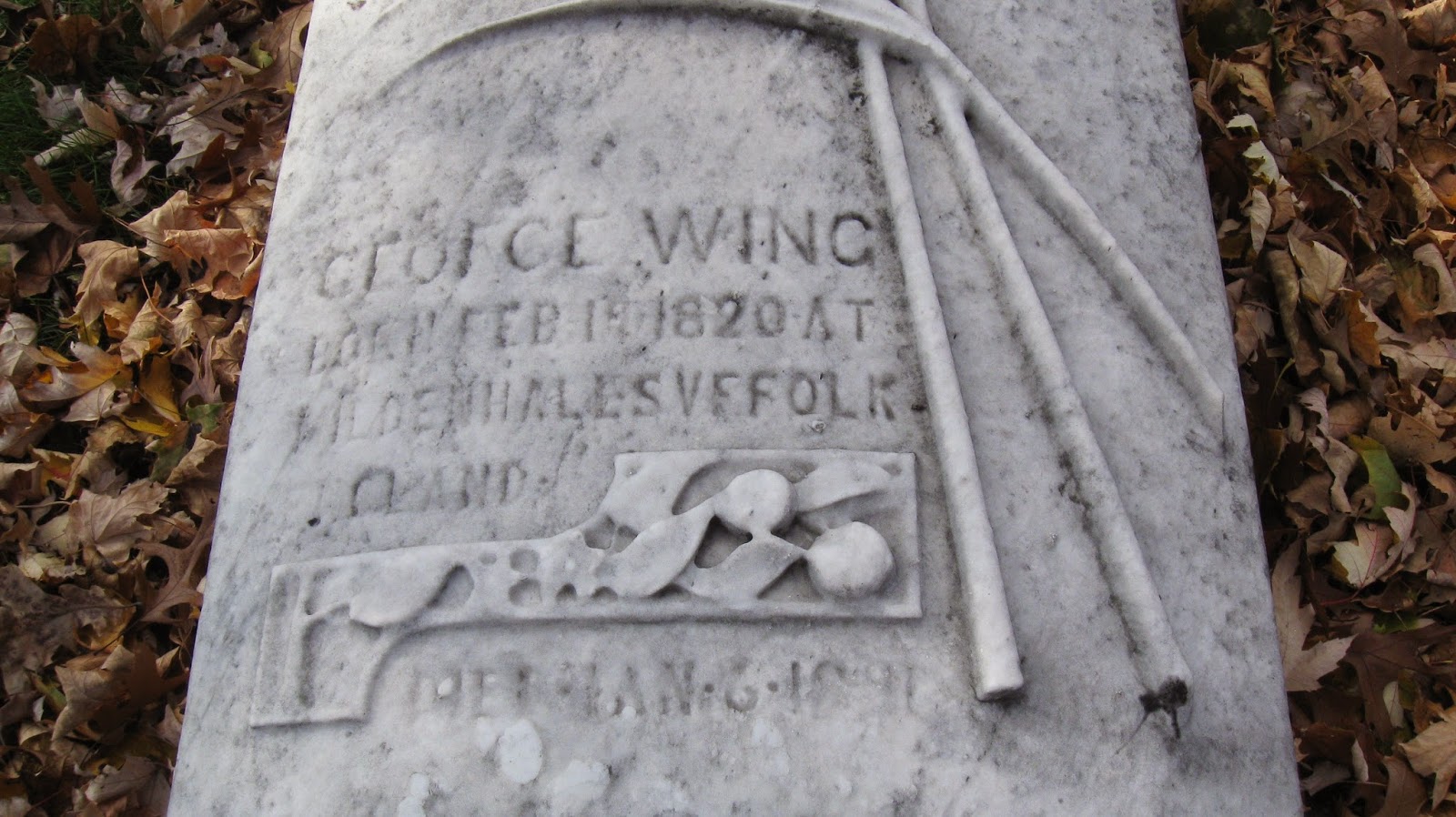 His parents were Charles and Susan Wing.  I was not able to find out any information about them, or whether George had any siblings.  We do know that George was baptized on March 17, 1820 into the Church of England.

The Wing family is still in England for the 1851 English Census.  The family was still living in Mildenhall, Suffolk.  George is 31, Mary Ann is 25, Young George is 6, and Phebe is 2.  George lists his occupation as "Agricultural Labourer."

The 1860 US Census finds that the Wing family has relocated to Chicago, Illinois and the family has added some new members.  In addition to George, Mary Ann, Young George and Phebe, we now also have Thomas (1854-????), John (1856-????) and the one month old "Pet" (a girl).  We can follow the movements of the Wing family by looking at where their children were born.  Young George and Phebe were, of course, born in England.  Thomas was born in New York, John was born in Canada, and Pet was born in Chicago.  Apparently the Wing family moved around frequently before settling in Chicago.  George lists his occupation as "Miller."

By the 1870 US Census, Mary Ann Wing has died.  George Wing has remarried, to a woman named Emma.  Unfortunately these records were lost in the Great Chicago Fire of October, 1871.  "Young" George (not so young anymore) no longer lives at home.  Phebe, Thomas W. and John are still at home along with "Pet" who is now known as "Jessie."  George lists his occupation as "Teamster" and says he has $3,000 in real estate and $500 in possessions.

George Wing died January 6, 1891 in Des Plaines, Illinois.  In his old age George must have moved in with his son John on the farm, or at least have been visiting because his death certificate lists the place of death as "Des Plaines."  Parts of Des Plaines are in Maine Township. 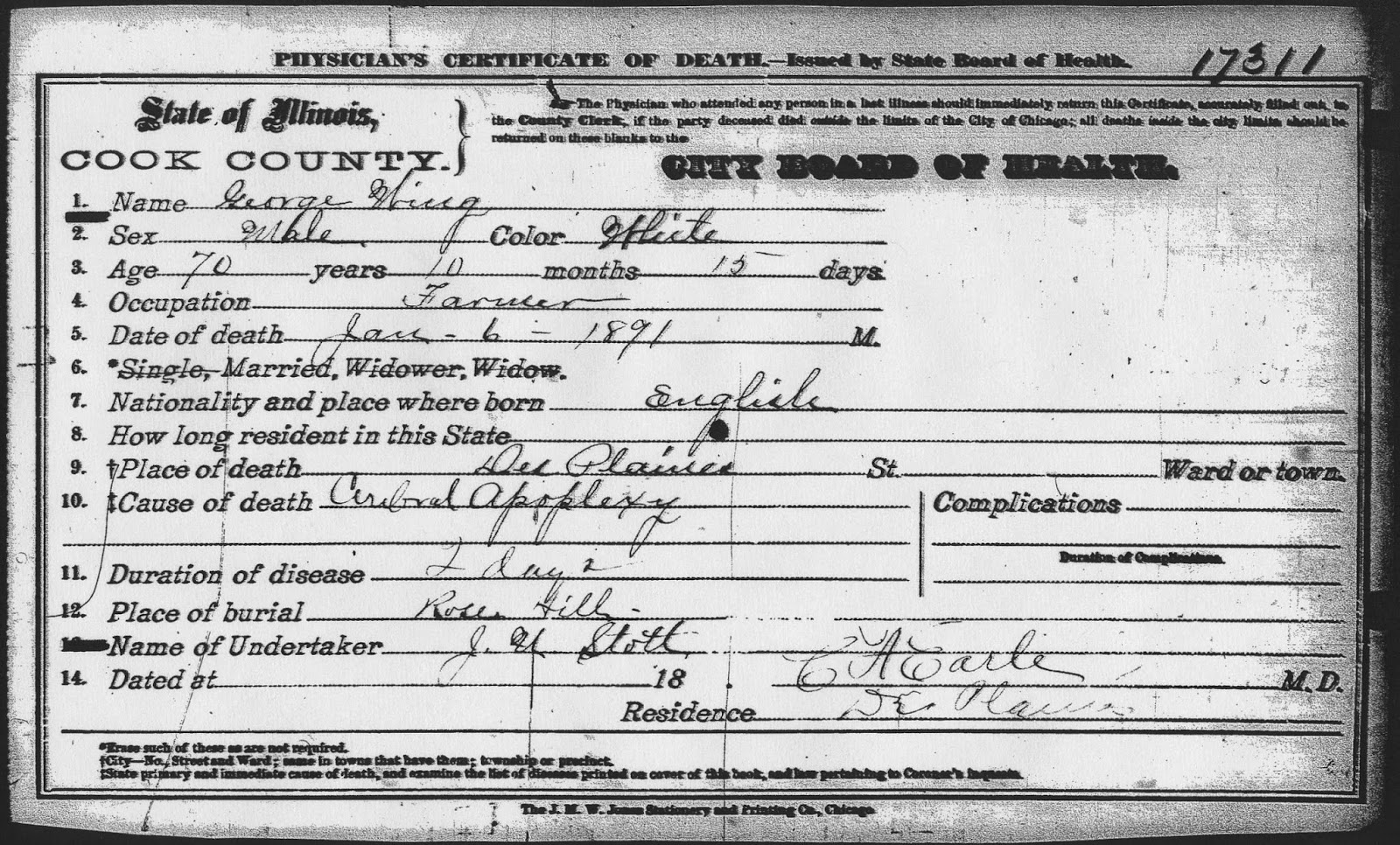 The cause of death was listed as "Cerebral Apoplexy" which is what they called a stroke in the old days.  He had only been ill for two days.  He was almost 71 years old.  Here is his Death Notice from the Chicago Daily Tribune of January 8, 1891:

According to his death notice he still had a home on Orchard Place in Chicago, but he died in Des Plaines.  His occupation was listed as "farmer."

Here's a piece from an article about local news in the Chicago Daily Tribune of January 11, 1891:

We actually know who created the beautiful tombstone that marks the grave of George Wing in Rosehill Cemetery because luckily they "signed" it.  Along one side, in the lower corner is the name "Hoffman & Co."  If you weren't looking for it, you'd probably miss it:

Here is an ad for the H.C. Hoffman Monument Co. from the Evanston City Directory of 1888: 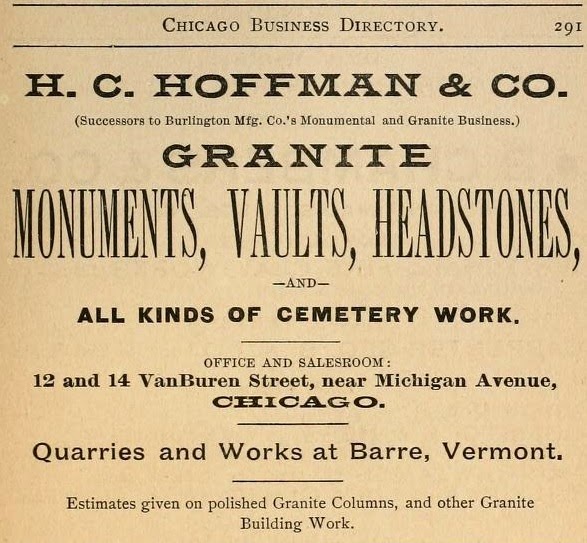 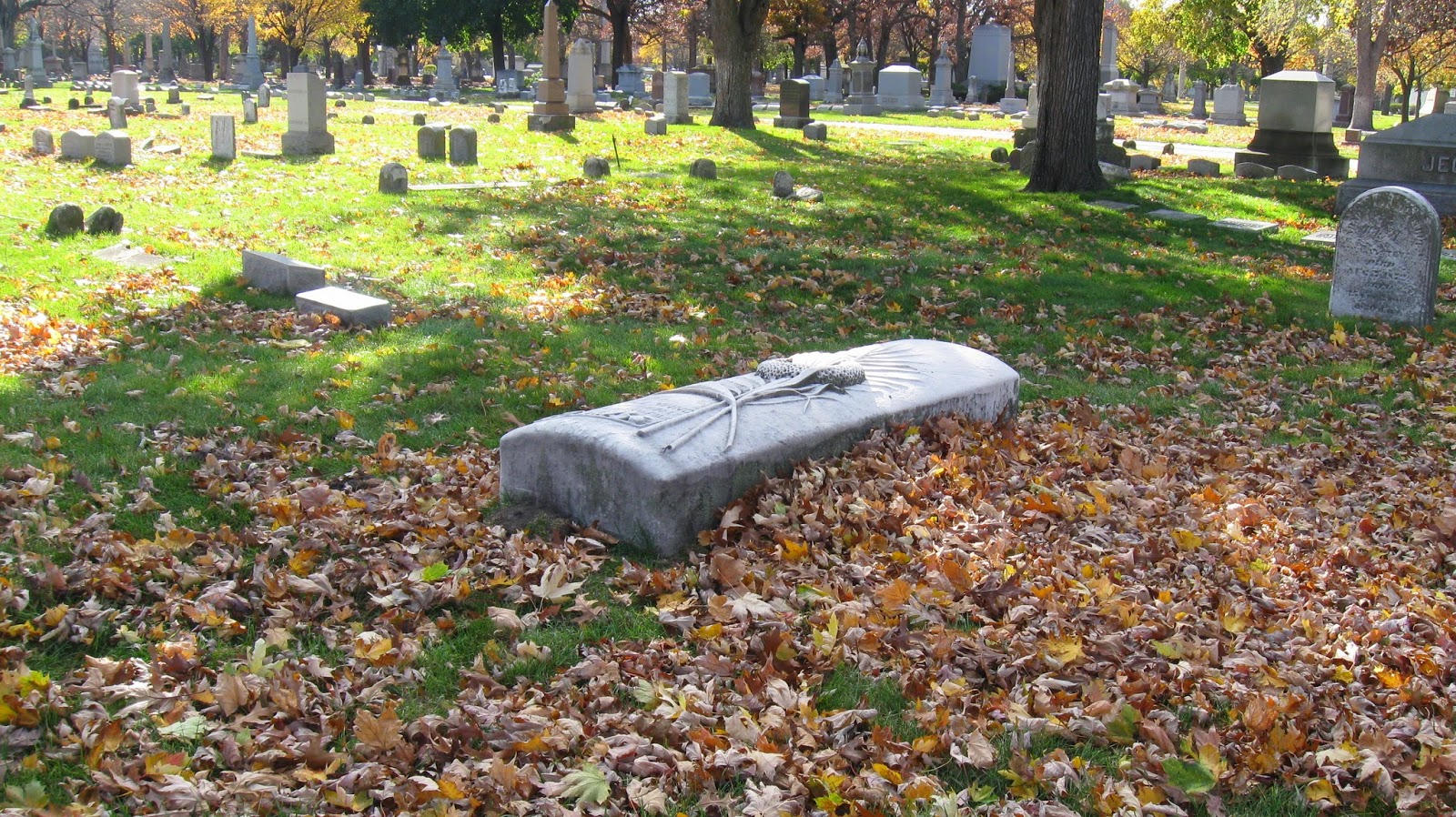 That is all I have been able to "dig up" about George Wing and his family.  I may not have been able to uncover a lot of information, but we have his beautiful tombstone as an everlasting remembrance of the man from England who brought his family to Chicago in search of a better life. 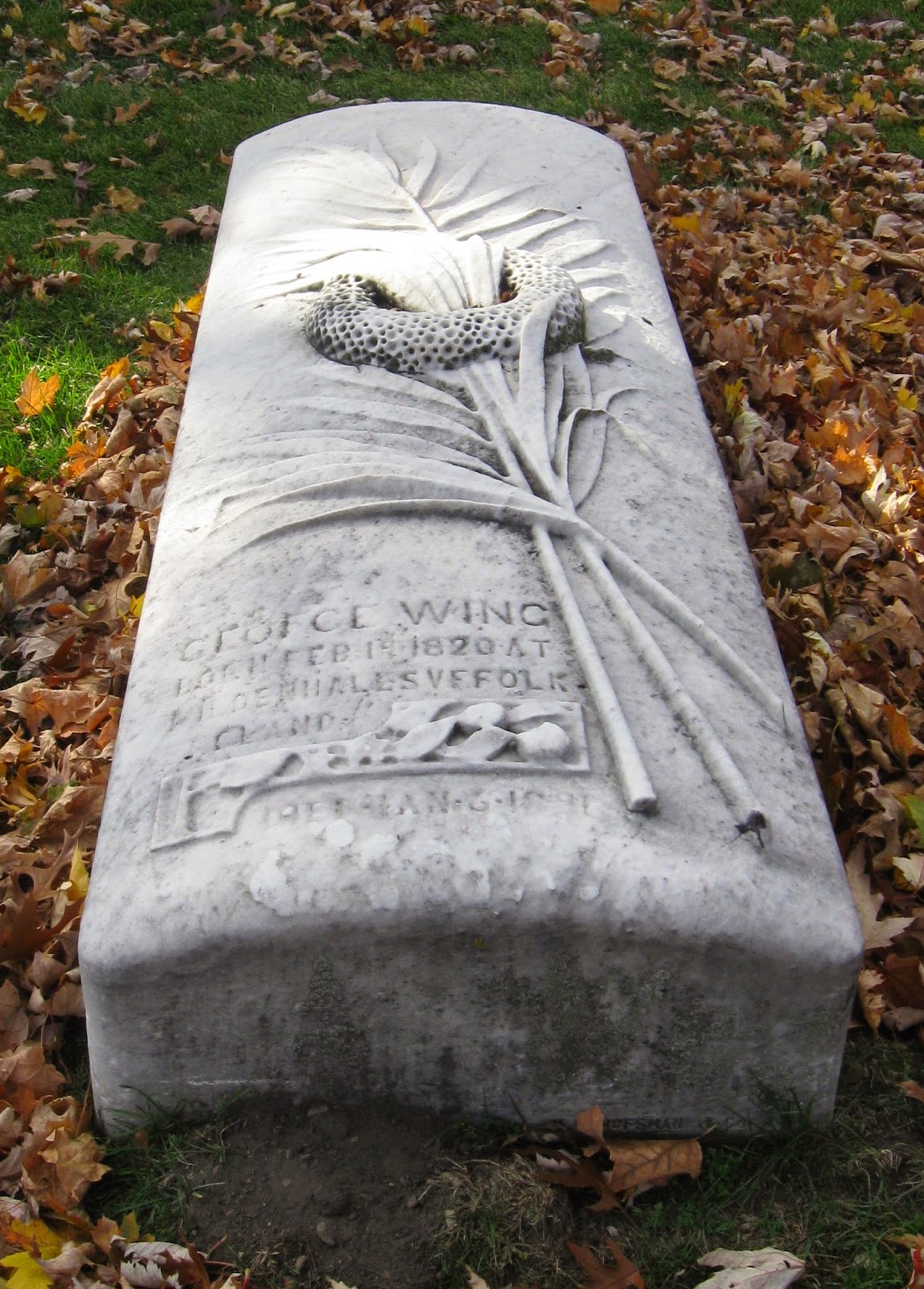 George Wing - the Englishman who came to Chicago - may he rest in peace.
Posted by Jim Craig at 2:50 AM