You just never know who you are going to find when you are filling Find a Grave photo requests.  Last week I saw a photo request for Rosehill Cemetery in Chicago.  The request was to photograph the grave of Herman Klanowsky (1848-1909).  No location was given for Herman's grave.  The minute I saw the name "Klanowsky" it rang a bell.  I remembered that there was a family mausoleum at Rosehill with the name Klanowsky on it: 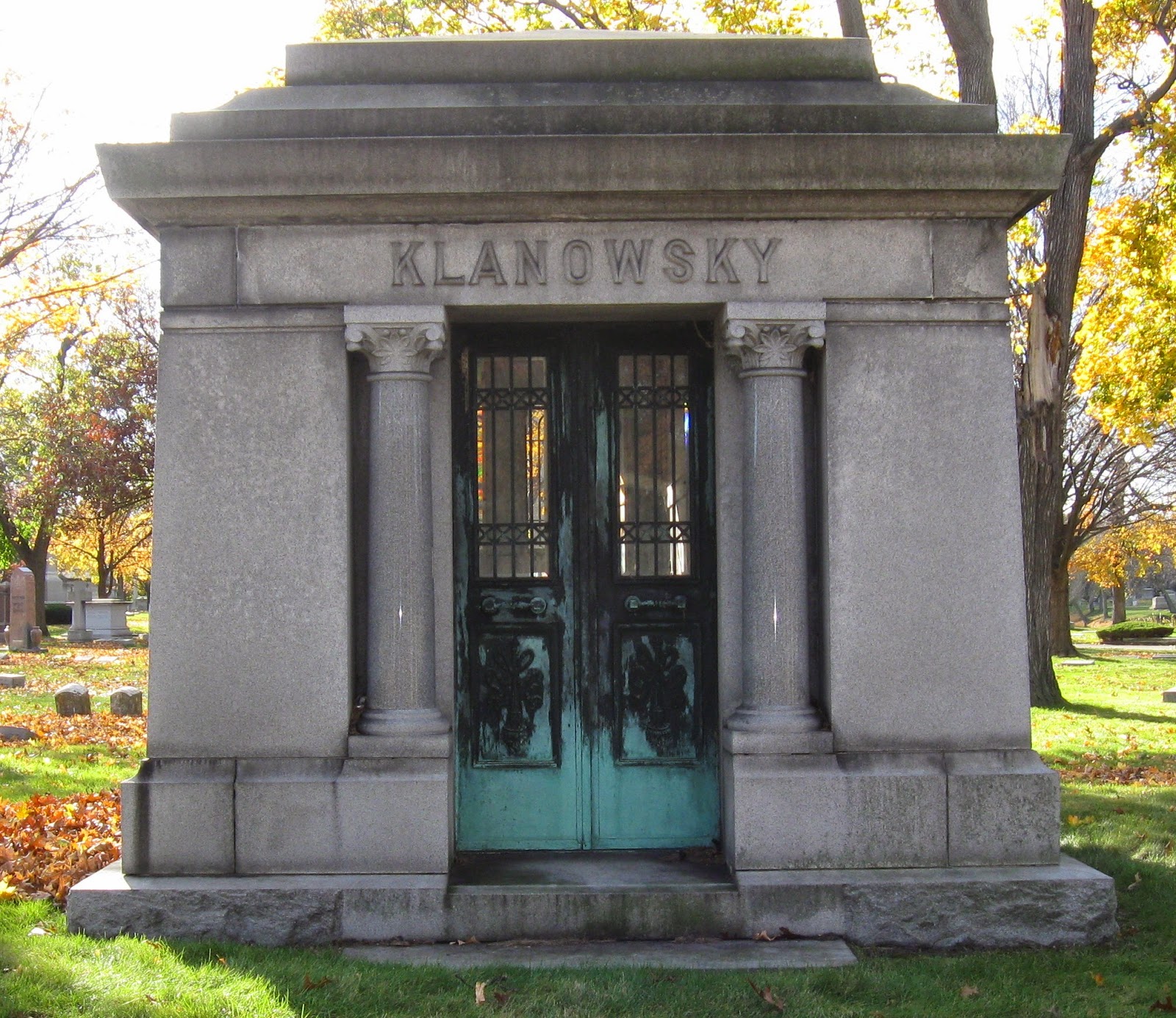 It's right at the north end of Section K - I've passed it countless times.  I thought there was a good chance that Herman Klanowsky was interred there, and I was right: 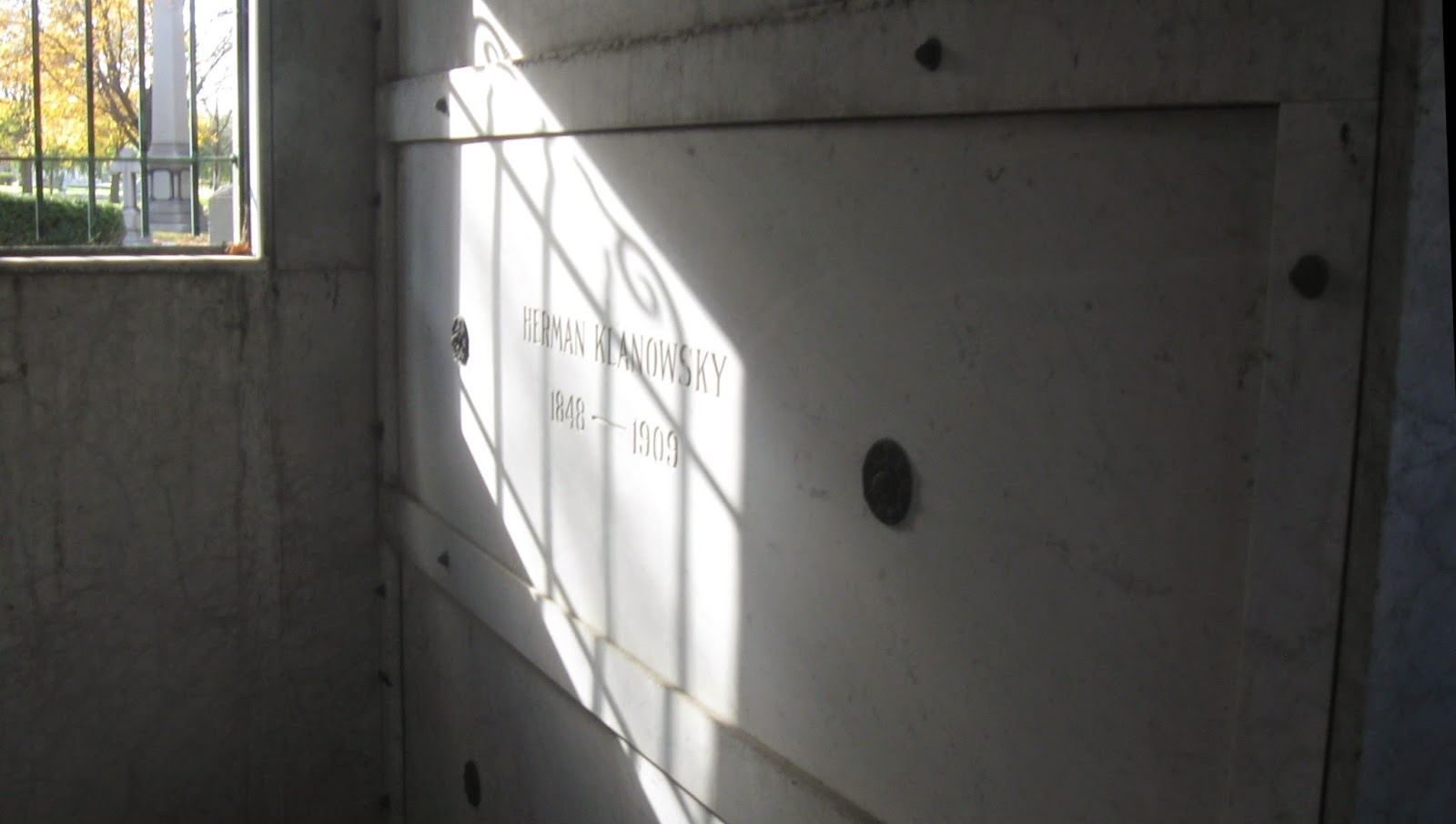 ﻿
I was glad to be able to fill that photo request, since Rosehill will no longer give out grave locations in the office, but the other person interred in the Klanowsky family mausoleum was the one that caught my attention: 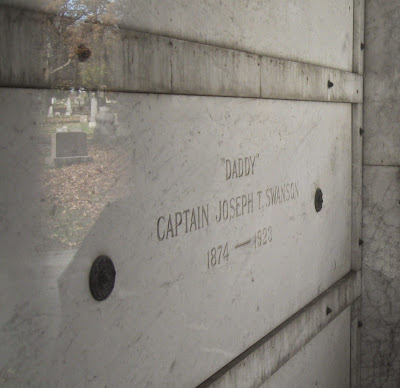 I wondered who this Swanson person was, and wondered why he was in the Klanowsky family mausoleum.  I decided to photography his crypt as well, and post in to Find a Grave if needed.  When I posted the photos to Captain Swanson's memorial page I found out exactly who he was:  the father of silent screen superstar Gloria Swanson.   I have always been a huge fan of Gloria Swanson - especially after I found out that she had made a movie with Rudolph Valentino called "Beyond the Rocks."  I even wrote to Gloria Swanson late in her life and she autographed a photo of her with Valentino to me.

Let's see what we can "dig up" about the father of this "silent goddess": 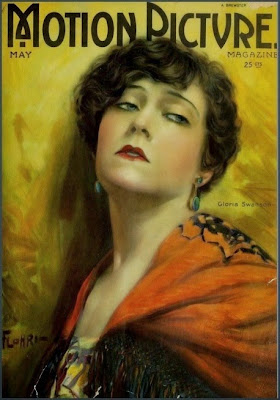 
The 1880 US Census shows the "Swenson" family living at 116 (now 862) Sedgwick in Chicago.  In later years, 862 N. Sedgwick would be part of the Cabrini-Green housing project; now it is a vacant lot.

The 1890 US Census for Chicago is lost, however by the 1900 US Census, twenty five year old Joseph "Swanson" was living at 885 (now 3124 N.) Seminary avenue in Chicago.  On that spot today is a condominium building built in 2000.  Swanson listed his occupation as "Clerk in the War Department," meaning he had already begun his life-long career in the US Military.  But there were other changes as well.  First of all, Joseph Swanson reported that he was married.  Joseph Swanson married Adelaide Klanowsky (1878-1966) on January 4, 1898.  Even better, they had a young daughter - the soon-to-be-famous Gloria May Josephine Swanson who came into the world on March 27, 1899.

Most of what we know about the Swanson family at this time comes from Gloria's own reminiscences.  She started grade school at the prestigious Hawthorne Scholastic Academy in Chicago.

She often said that she spent most of her childhood on army posts, moving to Key West at age eight (1907) and to San Juan at age eleven (1910).  While living in San Juan she was pleased to have been able to learn Spanish.

Here's what Gloria had to say about her father in those days:

"My father is probably the person I was in love with,” she claimed.  “I remember when I was quite young – thirteen, fourteen – the awakening of sex.  My father smelled good to me.  I have a nose like a rabbit – I always associate this sense of smell with people I like.”  She valued Joseph’s opinion above everyone else’s.  “I was forever asking my father about the stars above our heads.  Down in the tropics where you see the Southern Cross, the stars seem so close to you.  You have roof gardens, and the evenings are so balmy, and they caress you.  There’s something about the tropics that lends itself to the mystic side of life. When he’d explain what the star was, I wasn’t satisfied with that.  I wanted to know what was beyond the star…I was very close to my father as a youngster,” Swanson said.  “I got a great education from him – much more than I ever got out of school.”

However, by the time the 1910 US Census was taken on April 15, 1910, Joseph Swanson was living alone at the Fort Meyer Military Reservation in Alexandria, Virginia.  His wife Adelaide and daughter Gloria had left him and returned to Chicago.  Originally the intent was for them to spend five months of the year with Adelaide's parents in Chicago and the rest of the year with Joseph, but by the time Joseph was transferred to the Philippines in 1915 they didn't even consider going with him.

By early 1916 Joseph and Adelaide had officially separated and after Adelaide accompanied her daughter to Hollywood later that year she began dating other men openly.

The 1920 US Census finds Joseph Swanson living in San Antonio, Texas.  He is forty six year old and listed as a "Roomer" at 315 1/2 S. Alamo Avenue in San Antonio. That site is currently the site of the Henry B. Gonzalez Convention Center.  His marital status is "Divorced." His occupation is "Field Clerk for the United States Quartermaster's Corp."

Joseph Swanson died October 2, 1923 at Fort McArthur in San Pedro, California.  He was 48 years old, not 52 as was reported in the newspapers.  Here is the story about his death from the Chicago Daily Tribune of October 3, 1923: 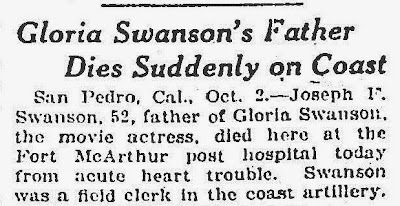 Gloria, as the only member of his immediate family, decided to have him interred in the Klanowsky family mausoleum at Rosehill Cemetery.  Here is his death notice from the Chicago Daily Tribune of  October 6, 1923:

I will end the story of Joseph Swanson with another quote about him from his daughter Gloria:

My father counseled me not to hurry my awakening: Life was 95 percent anticipation and five percent satisfaction.  “Savor every moment," he said "the five percent doesn’t last very long.”